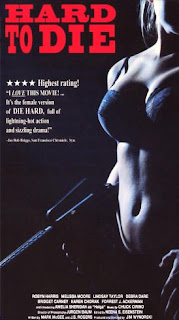 Directed by:
Jim Wynorski
I've really never understood the amount of hate this, and its companion piece SORORITY HOUSE MASSACRE 2 (also from 1990), have received from critics and genre fans alike. These things are obviously just silly, goofy exploitation/horror movie spoofs, and they're actually pretty damn amusing if you ask me. In fact, they're a hell of a lot more fun to watch than most other slasher movies, which are equally stupid yet take themselves totally seriously. The video box for this even features a woman in a bra holding a machine gun, along with a 4-Star rating from none other than trailer park critic Joe Bob Briggs, so it always amazes me that some people continue to rent this stuff, apparently expecting Bergman or something, and then decide they have to write negative reviews denouncing the overall silliness, bad acting, cheap production values and amount of nudity and/or violence. To me, HARD TO DIE delivered exactly what it promised with the ad art... action, blood, babes, machine guns, Corman references (this is, after all, a New Horizons video) and loads of cheesy, lightweight fun. Would I call it a "great" film? No, by traditional terms of cinematic quality, I would not. If you don't like seeing ladies running around in lingerie with machine guns, then don't bother. Would I call it a "great" B-movie? Absolutely. 100% yes. It's extremely entertaining. It also has a good sense of humor, tongue in cheek sensibilities and energy to burn.

British babes "Robyn"/Gail Harris and "Lindsay Taylor"/Karen Mayo-Chandler, 6-foot blonde babe Melissa Moore, exploitation veteran babe "Debra Dare"/Deborah Dutch and auteur babe Bridget Carney play five scantily-clad young women hired to work a temp inventory job at "Acme Lingerie" in a closed down for the night high-rise. They all get naked in a touching group shower scene that alludes to the powers of female bonding (HA!), try on the new Fall lineup of underwear, then accidentally open a "soul box" containing the spirit of Hockstetter, the notorious "sorority house killer" (last seen in Wynorski's similar and aforementioned exploitation-fest SORORITY HOUSE MASSACRE 2). Someone in the group becomes possessed by the evil spirit and starts killing the others with a hook. Thankfully there's an armory shop in the same building, so the surviving girls get to defend themselves with high-powered machine guns! Oh yeah. Big guy Peter Spellos returns from SHM2 as hulking janitor Orville Ketchum, who is mistaken for the killer and outlives a dozen or so knees to the crotch, stabbings and gunshots, not to mention a fall off the roof!. The same cops from SHM2 (Jürgen Baum and "Karen Chorak"/Toni Naples) also pop in, as does Forrest J. Ackerman as an anthropology professor and Monique Gabrielle (as "Lucy Burnett") as a chinese food delivery girl. Scenes featuring Wynorski as a porn movie director and Kelli Maroney (billed as "D. Mason Keener") were cut from the American DVD and VHS release but are in the European cut of the film.
If you decide to take these zany proceedings seriously, that is your choice, but approached in the right state of mind, it's often hilarious. There's B-movie ingenuity at work here in this silly time-waster. It is action, nudity and in-joke packed and the ladies are all all pretty fun and energetic, so it's fine viewing for the audience intended. If you do not like these films, simply do yourself a favor and stop watching them.
★★★
Posted by The Bloody Pit of Horror at 11:16 AM

kinda weird. i saw this before SORORITY HOUSE MASSACRE II, having no idea it was a follow-up/do-over. i only knew it as one of the clips featured in SCREAM QUEEN HOT TUB PARTY (1991). at this point in time there was a hell of a lot of overlapping crew and cast between jim wynorski and fred olen ray, and they made the aforementioned HOT TUB PARTY and DINOSAUR ISLAND together. pretty good pic, this one! hits the spot better in setup than pay-off, but i had fun with it overall, and my mind didn't wander as with SHM2. was pleased to see forrest j. ackerman here, getting some extensive dialogue for a change.

I absolutely love the 80s / early 90s period for low-budget B-movies, as well. Both Fred and Jim kind of dropped the ball around the mid 90s and the magic just went away for the most part. An over-saturation of product and thus little demand for more, plus the change from film to digital, competition for late night cable spots (which went to soft-core porn over B / exploitation flicks) and, the final nail in the coffin, the internet cutting into profits, kind of killed most of these well-crafted B flicks off. Funny though that SHM2 and HTD (two films ridiculed upon release) both look pretty good now in comparison to most of the garbage coming out direct-to-video.