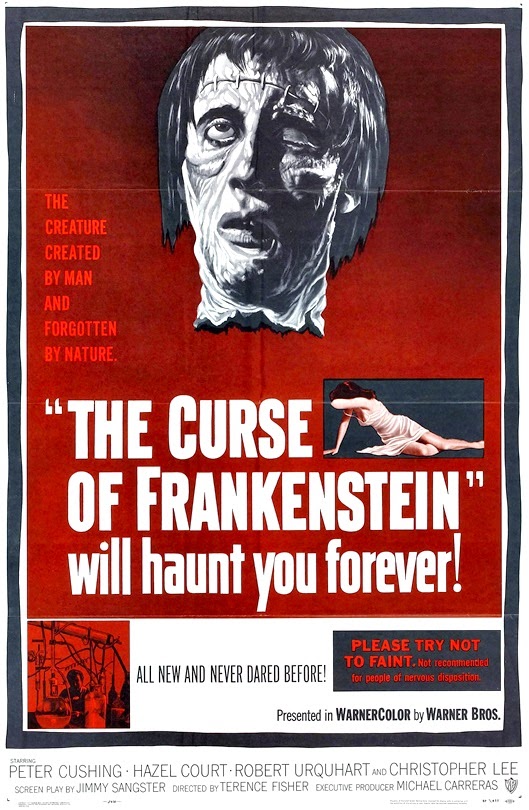 ... aka: Frankenstein and the Monster

This milestone British horror effort is notable for many reasons. For starters, it was the first Frankenstein adaptation to be filmed in color. Secondly, it was a huge international hit that not only became the most successful British film of its time but also helped establish Hammer Productions as one of the world's premiere studios specializing in fantasy, science fiction and horror - a title it would retain for the next twenty years. Third, it (along with Hammer's follow-up hit HORROR OF DRACULA) made stars out of leads Peter Cushing and Christopher Lee, whose names would become synonymous with the genre. And finally, it helped to usher in a return to Gothic horror after years of atomic age sci-fi films (dealing with alien invasions, giant monsters, etc.) that dominated the early part of the decade. Furthermore, the film also upped the ante in on-screen gruesomeness.

In a mountainous village in Switzerland sometime in the 19th Century, Victor Frankenstein (Cushing) is being held in an asylum, and narrates his own story about how he ended up there. After inheriting the Frankenstein fortune upon his parent's death, young Victor decides to hire live-in tutor Paul Krempe (Robert Urquhart) to school him in science. After years of study, the two men begin experimenting in bringing the dead back to life, starting with successfully reviving a puppy. Not quite satisfied with that, Victor (with assistance from an increasingly reluctant Paul) decides to move on to experimenting with human corpses. They acquire the dead body of a hulking burglar from the gallows, bring his body back to the lab and discover birds have rendered much of the body unusable. Victor then sets out to find replacement parts, starting with getting the hands from a newly-dead sculptor. Meanwhile, Victor's lovely cousin Elizabeth (Hazel Court) shows up to make good on a marriage arranged during her youth. Little does she know, but Victor is already carrying on an affair with household maid Justine (Valerie Gaunt), and plans to continue doing so regardless of his engagement.
.
Realizing things have taken a decidedly wrong turn, Paul chooses to quit assisting in the experiments and tries to encourage Elizabeth (whom he has grown fond of) to leave, but she refuses. Victor keeps acquiring body parts in Charnel houses and such, but when it comes down to getting the right brain for his creation, he's reduced to murdering a brilliant scientist (Paul Hardtmuth) to get it. During a scuffle with Paul, the brain is damaged but Victor decides to use it anyway and finally his creation is complete. Lightning strikes and soon the strong hulking creation (Lee) is brought to life.

From top to bottom, this is a professionally done production. It's well directed by British horror king Terence Fisher, has convincing period detail and boasts an excellent central performance from Cushing, as well as very good supporting ones from Urquhart and Court. Lee himself has just minimal screen-time, but still manages to make an impression as the creature. However, the role itself is more one-dimensional than what we'd previously seen in Boris Karloff's portrayal in the original FRANKENSTEIN films. Other notable contributions come from composer James Bernard, cinematographer Jack Asher, production design and art direction from Ted Marshall and Bernard Robinson and costumes by Molly Arbuthnot. The film is quite grisly at times, with a decapitation, severed hands, eyeballs, brains, a shotgun blast to the face and a fiery finale. The pale green make-up design on the creature (conceived by Philip Leakey) gives it a more zombie-like appearance than previously seen in other adaptations.

Despite an implied execution at the end of the film, Cushing's mad scientist returned again (albeit under the name Victor Stein) in THE REVENGE OF FRANKENSTEIN the following year, as well as many other sequels for Hammer, lasting until 1974's Frankenstein and the Monster from Hell.