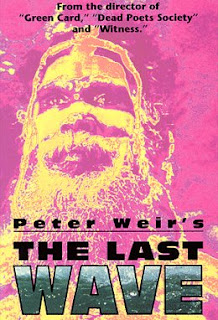 
“A dream is a shadow of something real." Truly bizarre, one-of-a-kind thriller mixes horror, fantasy, mystery, social statement and courtroom drama into an intriguing vision of the apocalypse. Lawyer David Burton (Richard Chamberlain), a married corporate taxation specialist with two young daughters, is curiously assigned a case involving five Aboriginal men accused of murdering a man whose heart simply stopped beating. Meanwhile, Australia is being hit with one strange weather phenomena after another; nonstop rain, freak hailstorms on clear, sunny days, solar spots, black sludge falling from the sky... Suddenly plagued by creepy nightmares, David sets out to find the truth, insisting his wife (Olivia Hamnett) and kids split town because of some obscure impending danger and becoming involved with one of the accused (David Gulpilil, from Nicolas Roeg's acclaimed film WALKABOUT) and an elusive, mysterious tribal elder (Nandjiwarra Amagula) in the process. What he learns might just be that the end of mankind is right around the corner. But with just about all of mankind oblivious to the obvious signs around them, will anyone believe him? Or is it already too late?

Scripted by the director, Tony Morphett and Petru Popescu, who are sensitive to the plight of the Aboriginal people, both legally (civil law trumping tribal law at every turn) and socially (the parallels to the American Indian and other indigenous people across the globe who were misunderstood and pushed to the outskirts of society by European settlers). Weir manages some extremely chilling and powerful set pieces here (the dream sequences pack a low-key punch) and he's ably supported here by Chamberlain's ingratiating lead performance, the believable presence of real-life aboriginees Gulpilil and Amagula, Charles Wain's supremely eerie score and Russell Boyd's densely murky cinematography, but the film is simply not going to appeal to everyone out there; especially those who prefer a more standard storytelling process. It's very much in the company of Weir's PICNIC AT HANGING ROCK, and possesses the exact enigmatic qualities that will either fascinate or frustrate, depending on the viewer.

Winner of two awards from the Australian Film Institute (cinematography and sound) and nominated for five more (lead actor, director, script, score and Max Lemon's editing). The Criterion Collection DVD is a pristine print with the trailer and a good, but brief, interview with Weir.