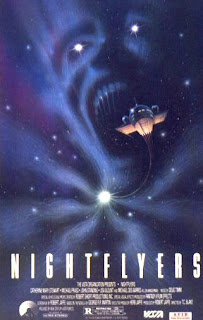 Directed by:
Robert Collector
Sometime in the 21st Century, assorted male and female scientists, lured under false pretenses for a damage assessment space mission, end up trapped on a smoky, haunted spaceship run by the spirit of an evil woman holding her manufactured male clone "son" Royd (Michael Praed) hostage. "She" uses lasers to cut off fingers and heads, sucks a victim out of airlock, blows another up, possesses headless corpses and keeps track of it all on red-eye video monitors. After just about everyone is killed, Miranda (Catherine Mary Stewart, from NIGHT OF THE COMET) and Royd must team up, locate the mother's core unit and destroy it. Guest star Michael Des Barres gets to rant and rave as a drug-addicted telepath. Also in the cast are John Standing, Lisa Blount, James Avery (the dad from "The Fresh Prince of Bel Air") and Helene Udy. Producer Robert Jaffe adapted the novella by George R.R. Martin, that tries (and for the most part, fails) to be a literate combination of science fiction and horror, though Gene Warren's Fantasy II and Robert Short provide some very decent special effects (inside and outside the ship), and the sets are excellent. Director Robert Collector hides under the alias "T.C. Blake" for this dark and dreary flick. I'd pretty much classify it as a misfire, but it's still somewhat watchable.
★★
Posted by The Bloody Pit of Horror at 7:48 AM