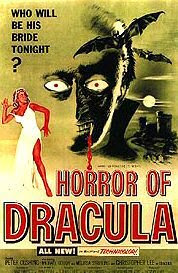 ...aka: Dracula
...aka: Dracula 1958
Directed by:
Terence Fisher
Certainly one of the best versions of Bram Stoker's novel, this adheres more closely to the book than most, if not all, of the other versions. It was also one of the first color versions of the tale and, along with Hammer's 1957 effort THE CURSE OF FRANKENSTEIN (1957), marked a welcome return to serious Gothic horror films at a time when big bugs, vicious space aliens and atomic blasts were kings at the box office. Both CURSE and HORROR were made on tight budgets, but were so good and so well made (not to mention, willing to introduce some blood and sexuality to the works), that they quickly became deserved box-office hits. The then-fledgling Hammer Studios would continue on with a long series of horror efforts (including sequels to both films) for nearly twenty more years after this one, and stars Peter Cushing and Christopher Lee would continue giving genre films a boost years after the doors at Hammer closed.
Jonathan Harker (John Van Eyssen) shows up Count Dracula's (Christopher Lee) castle posing as a librarian. His elusive host leaves a note for him, but eventually makes a wonderful shadowy nighttime entrance atop a staircase in between two large pillars. Instead of organizing the books, Jonathan ends up distracted not only by his eerie host, but also a distressed young woman (Valerie Gaunt) who claims she's being held prisoner in the castle. Before his stay is over, he's vampirized by the distraught lady, stakes her and himself ends up meeting a gruesome demise when family friend Professor Van Helsing (Peter Cushing) shows up in town. Van Helsing gets little help from frightened townspeople at a local tavern, but a barmaid slips him Harker's diary and he goes to Dracula's castle to investigate, only to find the Count gone and a broken picture frame with a missing photo of Jonathan's fiancée Lucy (Carol Marsh). Rightfully fearing Lucy is in danger, he heads back to London to warn her and her family.
After arriving in London, Van Helsing is met with opposition from Lucy's skeptical older brother Arthur Holmwood (Michael Gough), but gives the family a set of rules for her protection (crosses and garlic) when she starts falling ill and feeling anemic. A maid removes them, Dracula strikes (she makes it a bit easy for the seductive bloodsucker by opening her door, removing her cross and lying back in bed with eager anticipation) and Lucy herself is transformed into a creature of the night. The two return to Transylvania, Van Helsing returns to stake Lucy and then Dracula seeks revenge by returning to London and setting his vampiric designs on Arthur's wife Mina (Melissa Stribling).
Cushing is exceptional as the tireless vampire hunter, a slick mix of brains, courage and cool. Lee is given very little dialogue as the red-eyed count, but is incredibly magnetic and has such a powerful presence that he doesn't need it. The entire supporting cast is top-notch. The sets, costumes, script (by Jimmy Sangster), score (by James Bernard) and cinematography (by Jack Asher) are all uniformly excellent in this; an absolute must-see.
★★★
Posted by The Bloody Pit of Horror at 3:31 AM

This is an enthusiastic review and I am glad to see you like this film, but unfortunately your description of the plot is totally wrong. There is never any suggestion that a chunk of the action takes place in London, the whole film is set in generalised version of Central Europe.

Thanks for your correction. I have this on my list of movies to re-watch and am going to do a new and longer review for it sometime here soon so this one will be going kaput here eventually.