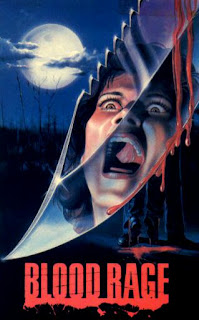 ...aka: Nightmare at Shadow Woods

Directed by:
John Grissmer
Make-up expert Ed French is the only crew member to exhibit any talent in this exercise in stupidity, and his bloody make-up FX are the only reason to watch it. A 10 year old psychopath axes a guy at a drive-in theater (conveniently playing THE HOUSE THAT CRIED MURDER, which was written and produced by the same director) and escapes punishment by blaming his innocent twin brother. Years later, the innocent twin escapes from an institution and the bad twin starts killing everyone in sight to frame his brother (again) and conceal his earlier crime. Mark Soper is terrible in the dual role as the good/bad twins (for some reason he'd somehow manage to land another lead role in 1989's UNDERSTUDY: GRAVEYARD SHIFT II) and Louise Lasser, trying to imitate her hysterical/hyperventilating Mary Hartman character as the mom, overacts something terrible and is a constant source of (unintended?) laughs. Ted Raimi shows up briefly selling condoms in a drive-in bathroom, producer Marianne Kanter gives herself a sizable role as a psychiatrist and French also has a cameo.

So other than the gore (body split in half, cut off hand, etc.) and some brief nude scenes (including sex on a diving board), this doesn't have much to offer. The horrible script (with many lines of choice bad dialogue and one of the most idiotic twist endings I've seen) was written by Bruce Joel Rubin (billed as "Richard Lamden"); the same guy who received an Oscar for penning the top-grossing film of 1990, GHOST! A cut version missing some gore was released to both theaters and video under the title NIGHTMARE AT SHADOW WOODS. It wasn't released until 1987.
★1/2
Posted by The Bloody Pit of Horror at 2:40 AM