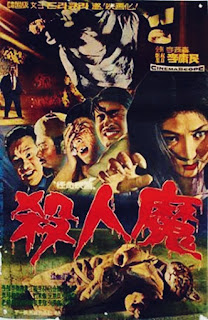 ... aka: 살인마
... aka: 殺人魔
... aka: Bloodthirsty Killer, A
... aka: Devilish Homicide, A
... aka: Devilish Murder, A
... aka: Sha ren mo
Directed by:
Yong-min Lee
Wealthy middle aged business Shi-mok Lee (Ye-chun Lee) goes to a museum expecting to see an exhibition only to find the building almost completely empty. The caretaker informs him the exhibition had already been held some time ago. Shi-mok does however find a melting portrait of his previous wife Ae-ja (Geum-bong Do), who'd died ten years earlier, and that is accompanied by ghostly female laughter. After leaving the museum, Shi-mok is unwillingly taken by a driver out to a secluded mansion where he encounters the crazed Joon-chui, who demands he take an identical portrait of Ae-ja. The same ghostly female laughter is heard and the crazed guy instructs Shi-mok to hide under the bed with the portrait. From there, he sees his ghostly former wife stab the man to death and float out of the window. Shi-mok manages to escape from both a guard dog and the driver when he comes after him with a knife and eventually encounters Ae-ja is a hidden underground room. She promptly falls over dead. Or so he thinks. Shi-mok transports the body into the city.

The corpse is taken to Dr. Park (Namkoong Won, from WOMAN OF FIRE), the same physician who'd already pronounced Ae-ja dead a decade earlier, and he's understandably amazed that her body has been so well preserved. However, upon further examination he soon realizes that she's anything but human. Her blood is clear and thin, she has no heartbeat, an x-ray shows that she has no vital organs, her eyes open and close on their own and she casts no reflection in a mirror. It isn't long before she's up off the slab and demanding the doctor restore her to life while making claims that she suffers from a condition so bad that even hell has rejected her! Ae-ja then uses her supernatural abilities to kill off those she feel wronged her, starting with electrocuting the doctor to death.
Shi-mok returns home to his second wife, Hye-sook (Bin-hwa Lee), mother (Ae-ran Jeong) and three kids and the ghost of Ae-ja starts haunting them and killing them all off. She opens doors, windows and cabinets, tries to strangle the mother in her sleep and makes blood come out of the faucet and rain down from the ceiling. Revelations about Ae-ja's death soon come to the fore as several family members are revealed to have murdered her. While the mother is returning home from a temple, she's accosted by the ghost, who smashes her head with a jagged rock and sends her body over a waterfall. The teenage daughter disappears after being yanked out of a window, dragged on top of the roof and then taken into the woods.

The dead mother's body is possessed and returns as a cat "goblin" to cause more problems. She recoils from a rosary, destroys Buddha statues in the garden, hisses, claws and cleans herself like a cat (and also casts the reflection of a cat in a mirror), hangs from the ceiling and licks the young kids on the face while they sleep (!) as a prelude to feasting on their blood. A face is beaten with a log until the eyeball pops out, a cat eats a corpse walled up in an empty temple, a mysterious maid shows up to warn the family and flashbacks reveal both the origin of the painting and just why Ae-ja's ghost hasn't been able to rest in peace. That involves jealousy, eavesdropping, adultery, blackmail and murder using an Indian drug that causes the taker to become deaf and mute for twenty days plus a special "venom" that causes disfigurement.

While this features the excessively done (at least in Asia) premise of a faithful model wife / martyr led to an early grave by scheming characters and now back for revenge, and has a narrative structure that won't please all viewers, it mostly makes up for that with great noir-ish lighting, good performances (especially the female leads), decent make-up, some interesting (though not always great) special effects, and best of all, a lightning-fast first hour that goes from one horror set piece to another with little let up. Initially a little confusing due to a chaotic pace, this finally hits a great off-the-wall groove where you're never quite sure what's going to happen next. However, the momentum ultimately slows down and things become more predictable with a lengthy soap opera flashback that, while not bad, probably should have been inserted elsewhere into the film. The final scene is also more than a lil bit cheesy.

The director was fairly prolific in the genre but is yet another Asian filmmaker whose legacy has been undermined by the mere fact they happened to do all of their work in the pre-home video era. Few of his titles received any kind of international theatrical distribution, only two (to my knowledge) have received an official home video release and nearly all of the rest appear to have vanished off the face of the Earth. Among Lee's other credits are A Flower of Evil (1961), The Gates of Hell (1962), Bride from the Grave (1963), Beauty with No Neck (1966), The Devil and the Beauty (1969), Revenge of the Snake Woman (1970), The Man with Two Faces (1975) and Black Ghost (1976), but good luck finding them. I'm not sure if any have even played on TV in Korea or have been released on video there. Even worse, a number appear to be missing and are possibly lost forever. 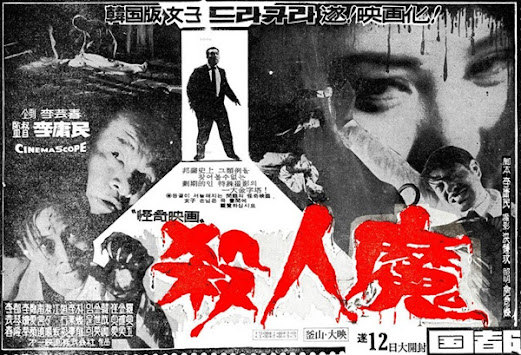 A Devilish Murder is one of the lone exceptions to the rule in that it received an anamorphic widescreen DVD release from Sinister Cinema with English subtitles. It's one of the only older Korean genre films that's relatively easy to find, which may have something to do with it also receiving a rather wide release in Hong Kong.
★★★
Posted by The Bloody Pit of Horror at 10:04 AM