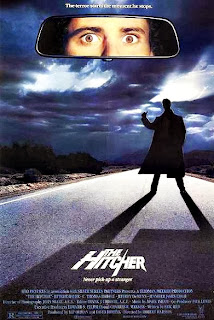 
"My mother told me never to do this," smirks Jim Halsey (C. Thomas Howell) as he pulls off to the side of the road to pick up hitchhiker John Ryder (Rutger Hauer) on a dark and stormy night. Not to let him down, John wastes no time in the "acting intimidating, shady and all-around psychotic" department. He refuses to tell Jim where he's going, stares at him and grabs his inner thigh just as he's about to pull over to help a stranded motorist. Jim mistakes it for a pass, pulls his car over and tells John the ride is over. John refuses to budge, says just enough to ease Jim's mind and then they're back on the road. And then John confesses that the car they'd just passed belongs to the last guy who gave him a lift and that he "cut off his legs... and his arms... and his head..." I guess mom was right after all. The Hitcher sets up its horror premise right out of the gate: There you are out in the middle of nowhere late at night with few others around and trapped in your car with someone clearly psychotic. What do you do? Well, you try to play it cool until you can lose them... Only this strange, mysterious man turns out to be about as easy to lose as one of those face-huggers from Alien.

Jim's first possible attempt to escape comes when they pass through a construction stop, but John pulls out a switchblade and gives a simple-enough warning: "Don't." When asked just what he wants, John is also rather direct: "I want you to stop me." Jim finally manages to push him out of his car, but his nightmare has only just begun. John seems to somehow appear everywhere. He murders a family of three, kills them and leaves their bodies in their station wagon along the side of the road for Jim to discover, kills a couple who give him a lift and then uses his truck to harass Jim along the dusty, desolate Northern Texas roads he's traveling through. After barely escaping a gas station explosion, Jim ends up at a diner where he meets waitress Nash (Jennifer Jason Leigh) and is left a nasty clue in his French fries that Ryder has even been there. Cops show up, arrest Jim and haul him off to the station for questioning.

At the station, strangely enough, Jim discovers that his wallet and the car registration are missing so he can't even properly identify himself and that Ryder has planted a bloody switchblade in his pocket to implicate him in the murders. He's promptly thrown into a cell, but the mysterious psycho comes there too and kills all the cops. Jim flees into the desert, has multiple other run-ins with Ryder and many more people (primarily police officers) die. Now no one's going to believe the poor kid! Luckily, Nash - who Jim bumps into once again aboard a bus - does, and helps him escape from the cops. She's repaid for her help by getting tied to two semi trucks and pulled into two. Just what exactly is going on? Who is John Ryder? Why is he terrorizing and trying to implicate Jim in a bunch of needless killings?

The Hitcher opts to go an extremely ambiguous route for quite awhile as the extremely unpleasant story unfolds. For about the first hour or so, one could even twist and turn the various events to where Jim is actually the killer and John doesn't even exist. However, that's all taken care of once Leigh's character, and then numerous others, actually see him. That then opens up numerous other questions about John Ryder that Eric Red's screenplay isn't exactly ready to answer. If we're to believe that John is a flesh-and-blood psycho, then there's way too much coincidence on display for this to be the least bit believable. The man certainly must have otherworldly powers to pretty much be everywhere he is at just the right time. He's able to anticipate nearly all of Jim's moves, can miraculously shoot down a moving helicopter with a pistol in one shot and shows up in places he'd have no clue where to be without possessing some powerful ESP abilities. Since his existence as a mortal - albeit a highly perceptive and intelligent one - is ultimately established, the level of exaggeration throughout equips this with a higher "Yeah, righhhht" quotient than usual; particularly on repeat viewings. Yet despite those major flaws, this is still a gripping, exciting, suspenseful and very well-made film. The oddly intimate and nearly-homoerotic relationship between killer and prey provides some additional interest, though a hidden meaning is left open enough to swing either way, so to speak.

Props can be sent out to nearly the entire technical crew for their work here, particularly the editor and cinematographer. Excellent locations are used throughout and this also boasts some of the most thrilling car crash scenes you'll see. Harmon had secured the director job because of a good 30-minute short he'd previously made called China Lake (1983), which also involved a psycho prowling desert highways and itself was remade as the TV movie The China Lake Murders in 1990. Harmon originally wanted Terence Stamp for the psycho role here, though it's difficult now to imagine anyone else other than Hauer (who's perfect) playing this enigmatic part. The rest of the cast - including Jeffrey DeMunn, Billy Green Bush, Jack Thibeau, Gene Davis, Armin Shimerman, Jon Van Ness and Henry Darrow (all playing small roles as law enforcement officers) - do their jobs.

Upon release, the reviews were extremely mixed (leaning toward negative from most of the majors) and this didn't exactly set the box office on fire. Nevertheless, the film picked up enough of a following over the years to spawn The Hitcher II: I've Been Waiting (2003), with Howell reprising his role, and a (critically panned) 2007 remake.