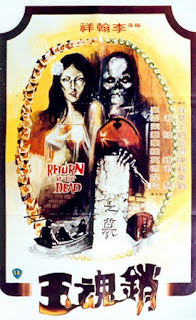 
When one thinks of horror anthologies certain ones immediately spring to mind like, say, Creepshow (1982). Three pioneering films in this subgenre were Richard Oswald's Eerie Tales (1919), Fritz Lang's Destiny (1921) and Leo Birinsky and Paul Leni's Waxworks (1924), all from Germany and all utilizing the familiar format of telling multiple stories and tying them all together with some kind of framing device. Though there were other early precursors to this format, like Julien Duvivier's Flesh and Fantasy (1943), the most famous early example of the horror omnibus as we know it today is the British production Dead of Night (1945), which is best known for its creepy ventriloquist's dummy segment starring Michael Redgrave. Several other portmanteaus would pop up sporadically through the 40s and 50s, like Three Cases of Murder (1955) starring Orson Welles, but this type of film wouldn't gain real traction until the early 60s when there was an outright explosion of them. Roger Corman's hit Tales of Terror (1962), featuring Vincent Price in three Poe tales, led the way and in the next few years we also got Mario Bava's Black Sabbath (1963), Robert Enrico's In the Midst of Life (1963; featuring three Ambrose Bierce adaptations including the standout Occurrence at Owl Creek Bridge), Sidney Salkow's Twice-Told Tales (1963), Masaki Kobayashi's Oscar-nominated Kwaidan (1964), Ramón Obón's 100 Cries of Terror (1965), José Mojica Marins' Strange World of Coffin Joe (1968), Federico Fellini, Louis Malle and Roger Vadim's Spirits of the Dead (1968) and many, many more.


Freddie Francis' all-star-cast DR. TERROR'S HOUSE OF HORRORS (1965) began a tradition at Amicus of specializing in this particular type of film, leading to numerous anthology releases from the studio into the next decade, including their most famous film: Tales from the Crypt (1972). The 70s saw many more, from the American made-for-TV movie Trilogy of Terror (1975) to the British / Canadian co-production The Uncanny (1977). Seldom making lists of horror anthologies are numerous efforts from Asia, like the rare Blood Reincarnation (1974), Fearful Interlude (1975) and this one, a three-part film from Shaw Brothers that's slightly better than some of the more famous titles in this category. The linking segment used here is similar to the one used in Amicus' Asylum (1972), where the stars have all been committed to a mental hospital because of the horrors they experienced in their respective tales. They also wonder if the head nurse (Linda Chu) is actually a ghost or not, something that is never really answered.

In our first tale, we meet the Wang family. Zhi-he (Feng Ku) is well-known for his preserved bean curd and runs the entire business out of his shop with help from his loyal wife Fang (Lai Wang) and their workers. Their grown son Xiao Bao (Luk-Wah Lau) is a nice young man who doesn't smoke, drink or gamble and works the forklift at a factory. All they really want for him is to marry a nice girl and settle down. Their simple and happy lives are all about to change though upon the arrival of family friend Mr. Hu (Chih-Ching Yang). Back from an extended trip he just took to India, Mr. Wu has some fantastic stories to tell about the people and culture. Most interesting of these tales is how he was “cursed” after being given a necklace with three monkeys on it and told that the necklace can make three wishes come true. The stipulation is that one shouldn't ask for more than they deserve or else the wishes will backfire and bad fortune will come their way. Mr. Hu used his first wish to get an 18-year-old mistress but when his wife raised hell about it, he used his second wish for peace and quiet. As a result, the mistress ran off with her cousin and the wife ended up in a nuthouse. Having learned his lesson, Mr. Hu used his third wish to come back to Hong Kong to be done with it.

The only way to get rid of the curse is to pass it along to others, so Mr. Hu hands the necklace over to the Wang's with instructions of how to use it plus warnings not to go overboard with it. All you have to do is place the necklace around your neck, kneel down, put your hands together and say your wish out loud and then you get what you want. Since the government is about to tear down their bean processing shop to build a highway, Zhi-he is thinking about making his wish for 20,000 dollars to be able to open a new shop. He half-jokingly goes through with the ceremony, along with his wife and son and then everyone goes to bed. The next day, Mr. and Mrs. Wang receive some terrible news. Their son, who appeared out of his mind all day at work, has been killed after falling into a vat of sulfuric acid and being burned beyond recognition. The insurance payout plus extra chipped in from co-workers totals 20,000 dollars.

What are a couple of grieving parents in possession of a powerful necklace capable of granting wishes to do? Of course, use their second wish to bring the son back to life. After Fang demands her husband go through the ceremony once more, a bad rainstorm begins and she's soon hearing a voice calling “Mom!” from out there somewhere... This is clearly an uncredited adaptation of W.W. Jacobs' classic short story The Monkey's Paw (with a necklace instead of the paw), which has been filmed dozens of times before and since, perhaps most notably as Bob Clark's Deathdream (1972). This version is well-acted, well-done and one of the better attempts at the story I've seen.


Story #2 begins as police, doctors and a crowd of onlookers rush to the shores of Blue Lake, where two motionless bodies lay. One of the men, Lin Kun-Quan (Wei Szu), has bruises around his neck from being strangled to death. The other, Jiang Tao (Hua Yueh), suddenly awakens, spits out water, screams, falls into a coma and is promptly taken to a hospital. An eyewitness steps forward, claiming he saw the two men hanging around the docks late at night and both were drunk. Police then begin their investigation while several flashbacks tell what happened to lead up to this point. We learn that two years prior to his death, Kun-Quan was a swimming champion and being forced into an arranged marriage by his parents, who are more interested in money than their own son's happiness. Kun-Quan is actually in love / lust with beautiful hooker Wei Meng (Wei-Ying Chen) and, sensing they'll be separated, the two go to Blue Lake and attempt suicide by leaping from a high rock into the water. He survives but she doesn't.

Two days after falling into the coma, Tao wakes with his own story to tell. He likes to drink and when he does he likes to go to Blue Lake to row around in a boat and be by himself. One night, a nude girl swims up to his boat. The two talk for a bit but get into an argument and she leaps back into the water and swims off, leaving behind a gold bracelet. The following night, Tao goes back and the two meet up again. When he mentions his friend Kun-Quan and how he attempted to commit suicide there, the young woman wonders if he has a guilty conscience about what happened and theorizes he may have tricked the girl into killing herself to be rid of her. Wanting to hear his side of the story, Tao gets back in touch his old friend, takes him out to dinner, gets him drunk and then lures him back to Blue Lake. This is an OK, albeit predictable, revenge-from-beyond-the-grave tale that will likely be of most interest for the near-constant full frontal nudity from the attractive leading lady.

Our third and final story centers around patient Da-zhi (Gwan-Tak Tai). Wealthy actress Yun-yu Xiao (Linda Chu again), who's nicknamed “Enchanting Yu” by her adoring public and rumored to be a sexually insatiable woman, passes away. The middle-aged but still beautiful Yun-yu managed to snag herself a much-younger husband in Kao Tai-Zhang (Wong Chun), who cares so much about his late wife that he's making plans to visit a whorehouse during her funeral. Local gossip has it that Yun-yu died in the middle of a sex marathon after the new hubby took some Spanish fly tablets and also that she will be buried with gold, silver and her prized pearl necklace. While out late trying to make some extra money, rickshaw driver Da-zhi picks up a woman who looks identical to the dead actress. She claims to be her twin sister and wants to visit her deceased sibling's grave. Da-zhi takes her out there and, in lieu of payment because she doesn't have money on her, she hands over a pearl necklace to hold for collateral until she can pay him back.

Upon returning home, Da-zhi's hooker girlfriend (Wai-Ling Lau), who makes extra money screwing (more like trying to screw) an elderly professor, suggests they sell the necklace to finally get out of the slums. Da-zhi goes to pawn shops and jewelers in the area, but can't get the price he wants, so he holds onto it. Good thing because he has a second run-in with Yun-yu's “sister” to give her back her prized pearls. In exchange, she'll help him win big at her father's casino. Da-zhi sells his rickshaw for gambling money, the two go and Da-zhi wins a small fortune. Meanwhile, grave-robber Da-Yan (Shen Chan) decides to break into Yun-yu's underground tomb. He cracks open the casket, takes the necklace and decides that he “might as well have some fun” while he's down there and starts getting frisky with the corpse. This results in disastrous consequences not only for him but also poor Da-zhi.

Each of the three stories are entertaining, well-filmed and fairly fun, though light on scares, suspense and violence. Actually, there's not a single drop of blood shown being spilled in this one, which is in stark contrast to the crazy Shaw Brothers horrors to come in the following decade. What does get amped up is the nudity and sex, which is made all the more evident in that the DVD packaging from Celestial tries to sell this more as a skin flick than a horror movie. There are six different nude scenes in here and two soft-core sex scenes, which are rather tame even for the time. Since all of these feature the beautiful Wai-Ying Chan or the equally lovely Linda Chu, I doubt there will be many complaints as these two show off what they got. Like many other anthologies (and the EC Comics that inspired many of these), the tales each have their own strong moral component about greed and stepping on others to get what you want.


The director had a long career lasting from the 50s until the 90s and made over 20 movies for Shaw Brothers, including THE ENCHANTING SHADOW (1960) and The Ghost Story (1979). Three of his films were nominated for the Palme d'Or at the Cannes Film Festival (1962's The Magnificent Concubine won a technical award there) and three of his films represented Hong Kong for a Best Foreign Language Film Oscar bid (none made the cut). He was also nominated for four Hong Kong Film Awards and won awards at the Asian Film Festival and the Golden Horse Film Festival, who gave him a posthumous Lifetime Achievement Award in 1997.