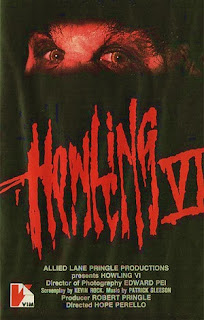 
The sixth entry in this long-running werewolf series has nothing to do with Gary Brandner's book series or the previous five films bearing the same name and instead seems to take its greatest inspiration from Ray Bradbury's 1962 book Something Wicked This Way Comes. Handsome, sad-eyed British drifter Ian Richards (Brendan Hughes) arrives in the small, dying Southwest desert town of Canton Bluff with just fifteen dollars in his pocket and a handful of papers he doesn't want anyone else to look at. Though the local sheriff (Carols Cervantes) initially tries to drive him away and others question his presence there, widowed pastor Dewey (Jered Barclay) agrees to give him room and board in exchange for helping to rebuild the communities run-down church. It isn't long before Ian's kind demeanor and hard work ethic manage to win over the town - not to mention the heart of the pastor's hot blonde daughter Lizzie (Michele Matheson) - but things are about to take a turn for the weird and horrific once a traveling carnival / freak show called Harker's World of Wonders strolls into town. 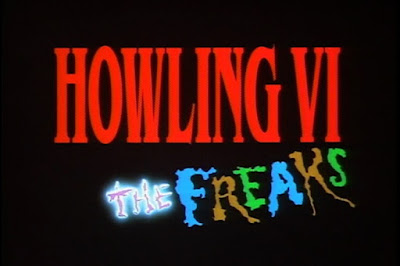 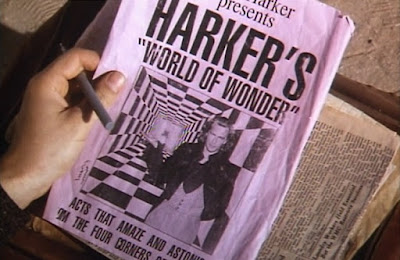 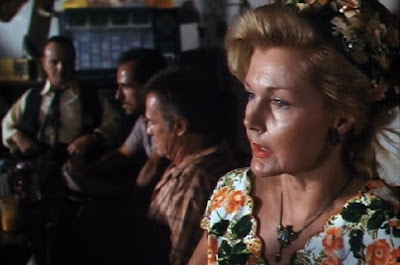 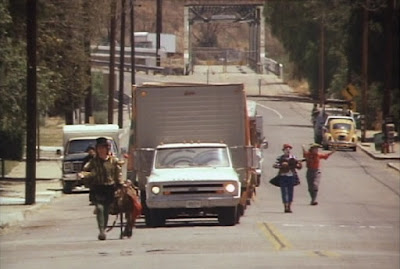 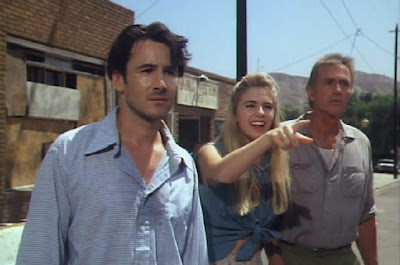 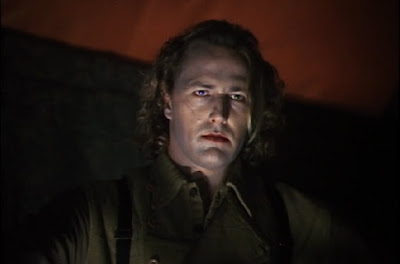 Headed by the charismatic and mysterious H.B. Harker (Bruce Martyn Payne), who is M.I.A. during the daylight hours (*wink*), the carnival boasts an array of oddities and human freaks. There's Mr. Bellamey (Antonio Fargas), the token geek who likes to bite off chicken heads, Mr. Toones (Deep Roy), a dwarf gambler with a tiny third arm he keeps tucked away in his jacket, transvestite stripper and torch singer Carl / Carlotta (Christopher Morley) and Winston Salem (Sean Gregory Sullivan), a meek, cat-loving burn victim whose scars are painted into scales so he can play "The Amazing Alligator Man." Ian turns out to be a "freak" himself and is in town with ulterior motives that coincide with the arrival of the carnival. Always on the lookout for a new monstrosity to add to his collection, Harker discovers that Ian is actually a werewolf. He has him captured, caged and then primed to be the new star attraction. Using a crystal and some chanting, the evil barker - who's also harboring a secret monstrous identity of his own - is able to make our hero transform whenever he wishes. 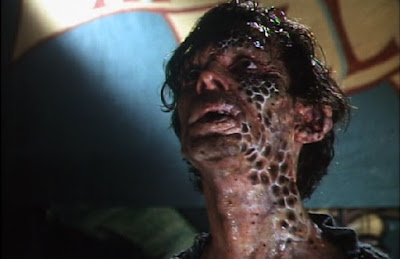 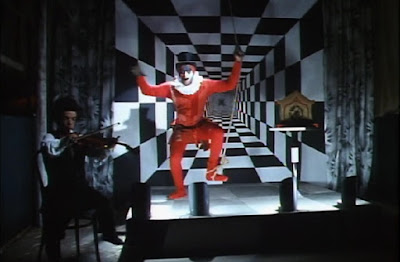 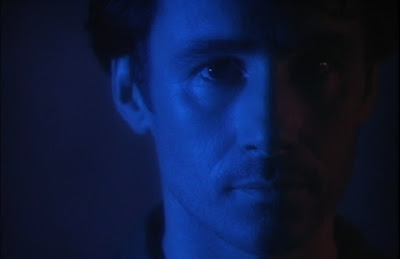 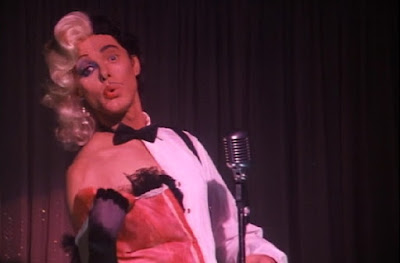 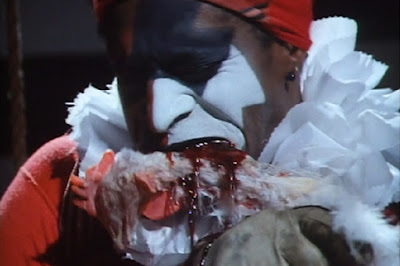 Howling VI suffers mostly from uneven writing. While Kevin Rock's screenplay boasts surprisingly well-defined characters and credible dialogue, the story line is unfocused, somewhat shapeless and a little lacking in narrative drive. Thankfully, the film itself has enough positives to partially overcome all that. For starters, I liked the fact the action centered around the same style of tortured werewolf from the Lon Chaney days, which is in stark contrast to the portrayal of the creatures in the first five Howling films. Not only is the wolf man sympathetic this time out, but it goes one step further by giving him partial control over his actions post transformation. While Chaney's Larry Talbot was a good guy turned murderous, out-of-control creature by the light of the full moon, the werewolf character here is pretty much a good guy in either his human or his monster form. Though some viewers may be disappointed by the absence of a more bloodthirsty creature, Payne's character more than makes up for that in villainy. 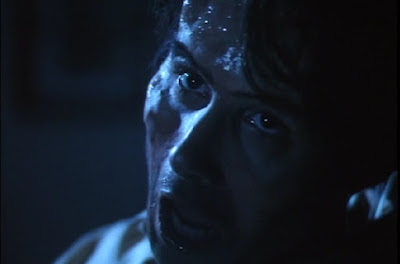 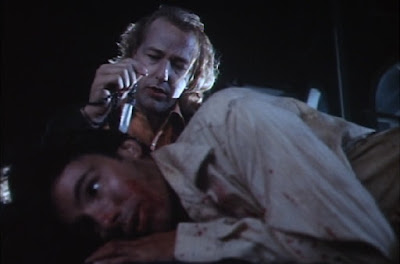 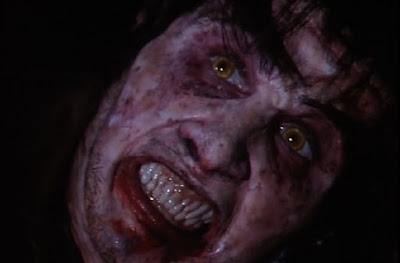 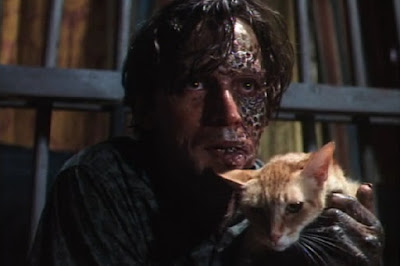 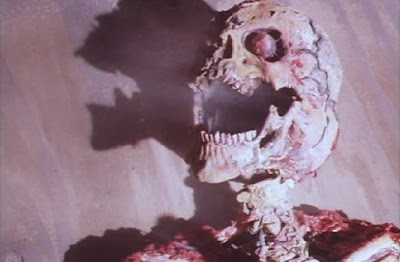 Another big plus is that the acting is vastly superior to most of the other films in this series. Lead Hughes - previously seen in the romantic vampire movie To Die For (1988) - not only does a fine job capturing both the mysterious and tender qualities of his character, but he's also physically perfect for this role because he has a gentle and kind look and non-threatening way about him. British character actor Payne is also perfectly cast playing the sinister, cultured and evil carnival barker, though he'd soon find himself being typecast in similar roles simply because he plays bad guy that well. While some of the other actors aren't quite as good, no one really embarrasses themselves either like they do in most of the other Howling movies. The only real disappointment was them under-using Carol Lynley, who was once a star headlining major studio productions but has been reduced here to a small and rather pointless part. Elizabeth Shé, one of the stars of HOWLING V: THE REBIRTH (1989), can also be spotted briefly in the carnival audience. 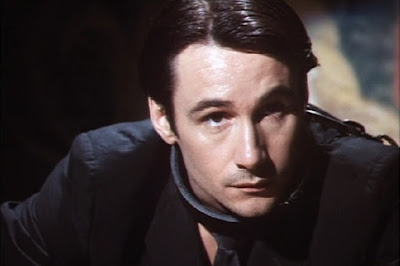 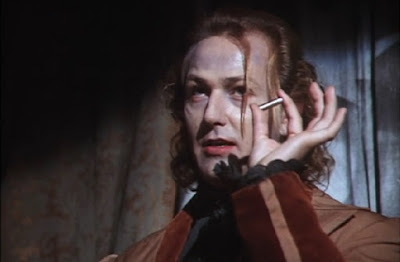 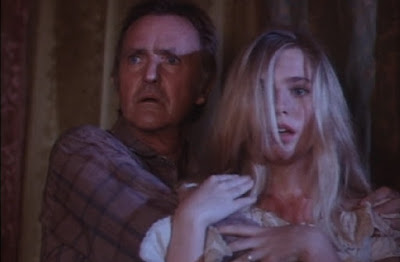 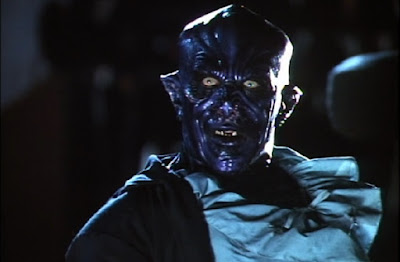 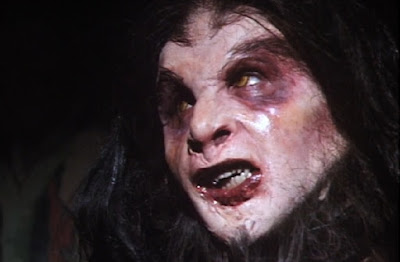 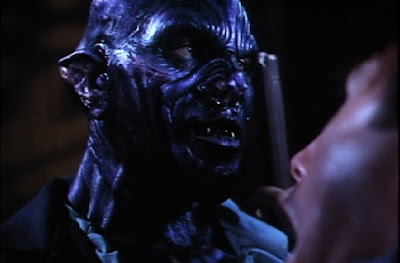 For a low budget production, the sets are fairly good and the movie also delivers more in the way of makeup fx than the previous two films, which are well- executed by Todd Masters and the ever-reliable Steve Johnson, who also contributed to the scant fx in HOWLING IV: THE ORIGINAL NIGHTMARE (1988). The look of the werewolf here is somewhat old school in the face department (there's no wolf-like snout and the transformation scene is pretty weak), but it looks pretty cool regardless thanks to bipedal legs.

Too bad the next installment brought the series back down.

I haven't watched that one yet but based on what I've read, I don't think I WANT to!