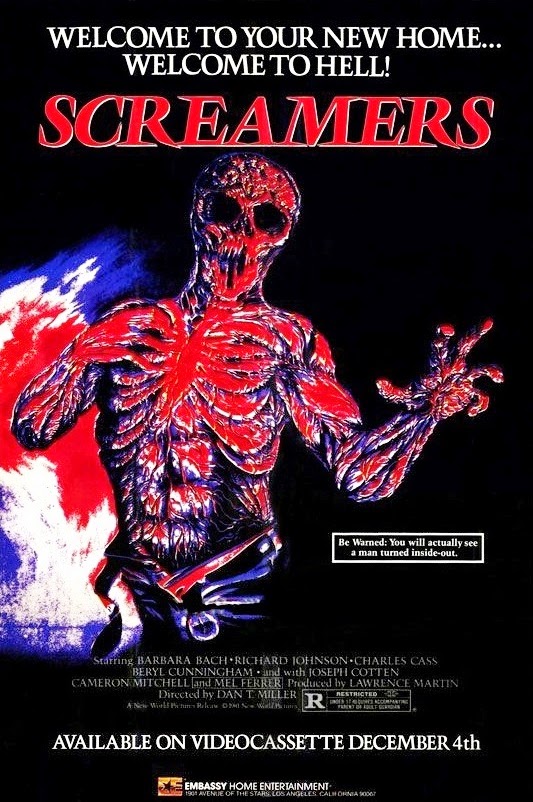 ... aka Something Waits in the Dark


Sergio Martino's L'isola degli uomini pesce (or ISLAND OF THE FISHMEN) was an old-fashioned fantasy-adventure involving a shipwreck survivor, a mad doctor, upright-walking fish men monsters and the treasure of the lost city of Atlantis. It was very light on exploitation elements and violence, and could easily be viewed by older children (I could imagine it getting a PG rating here in America), so when it came time for its U.S. release the new distributors decided to do something about that! After the rights were purchased, the film fell into the hands of Roger Corman and his New World Pictures. Fully aware of what was selling tickets in the early 80s (horror, gore, exploitation and hack-n-slash flicks), Corman had the film partially re-dubbed, removed around 30 minutes of footage and then hired Miller Drake (some advertising materials credit him as "Dan T. Miller") to film all-new footage (less than 20 minutes worth) to add to the original film in place of the omitted footage. The bulk of the new footage was a 12-minute-long prologue placed right at the beginning featuring four people arriving at an island only to be slaughtered in gruesome ways by a sea monster. Other gorier inserts were also spliced in at various points so this could be marketed as a horror film.

This new version opens somewhere on The Caribbean Sea in 1891 as a boat arrives on a foggy island (actually the ever-popular Bronson Caves in California). Pipe-puffing Captain Decker (Cameron Mitchell) has brought gambling-indebted James Radcliffe (Mel Ferrer) and his wife Samantha (Eunice Bolt) there so they can search for a rumored treasure. Decker leads them to entrance of "The Cave of the Dead," which the natives claim is haunted by ghosts, but otherwise refuses to take part in their hunt. James and Samantha wander into the caves, discover some bug-infested skeletons and find bits of the gold they were searching for. Meanwhile, waiting by the boats, Decker's assistant (Tom J. Delaney) has his head ripped off by a sea monster. The monsters then slaughter the other three, with brief-but-bloody close-up shots of a throat and stomach being clawed open. Hey, they even manage to throw a skull-faced zombie into the works. Why? Well, I guess the answer is: Why not? They've just successfully managed to add atmosphere, gore, slime and shocks to turn the original into more of a horror / slasher flick, so mission accomplished.

Footage from the original film then begins with doctor Claude de Ross (Claudio Cassinelli) and the other prisoners trying to find their bearings on the island they've just shipwrecked on. About 18 minutes in, we cut to another newly added scene which lasts about a minute. This one features another of the shipwreck survivors (James Alquist) awakening on the rocks, stumbling down to the beach and discovering an overturned boat. Inside he finds a slime-covered corpse and then turns around only to get clawed in the face by a slimy monster hand. Afterward we return to the original film for a spell as Claude encounters power-crazed Edmond Rackham (Richard Johnson), Amanda (Barbara Bach), who is introduced as Edmond's wife but really isn't, and Amanda's ill father, Professor Ernest Marvin (Joseph Cotten). Numerous scenes from the original have been shortened or removed entirely - including most of the subplot involving Edmond's voodoo-practicing assistant Shakira (Beryl Cunningham) - and every once in awhile they splice in a new close-up shot of a monster's eye.

The final and last major changes occur when Claude and Amanda find her father's hidden lab. In the original, there were numerous shots of real fish swimming around in tanks followed by the discovery of a half man / half fish creation. That has all been tossed out for new effects shots. The fish in tanks have been replaced by an octopus and a few puppet monsters and the gilled man strapped down has been replaced by an all-new creation designed by Chris Walas. The new creature design is actually excellent and looks about 100 times better than the creatures from the original version, which makes one wish it had been the star of an entirely new film! While the original isn't a terrible film as is, some viewers will no doubt prefer this altered version. It tells the same exact story as the first in a much more compact fashion but it also steers it away from family friendly fantasy into the realm of adult horror with the new footage and gory inserts.

After all was prepped and ready, this new version was released to theaters briefly in 1980 under the title Something Waits in the Dark, where it flopped. Intent on reclaiming the investment, Corman then had Jim Wynorski whip up a new ad campaign, which memorably though falsely promised viewers they'd actually see a man being turned inside out. A new trailer was also made by Wynorski, which featured an actress not even in the film as well as various goopy creatures also not seen in the film. It was re-titled Screamers, reissued theatrically in 1981 and ended up doing much better. The Embassy home video release used the same marketing ploy and also did well. New opening and closing credits were also prepared for this release, which show that Joe Dante (who was the associate editor and took the amusing alias "Giuseppe Dantini"), Gary Graver (DOP of the new footage) and Gale Anne Hurd (location manager) also worked on this. 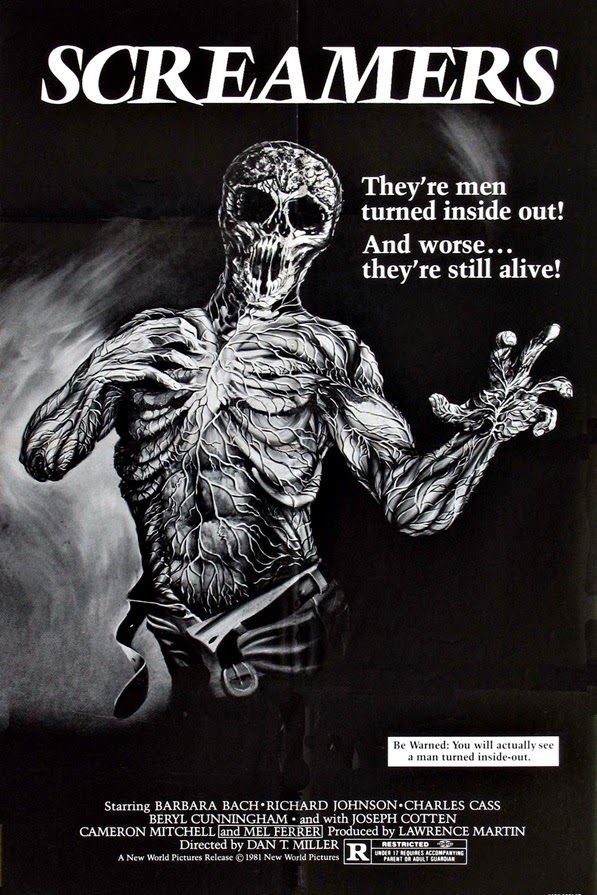 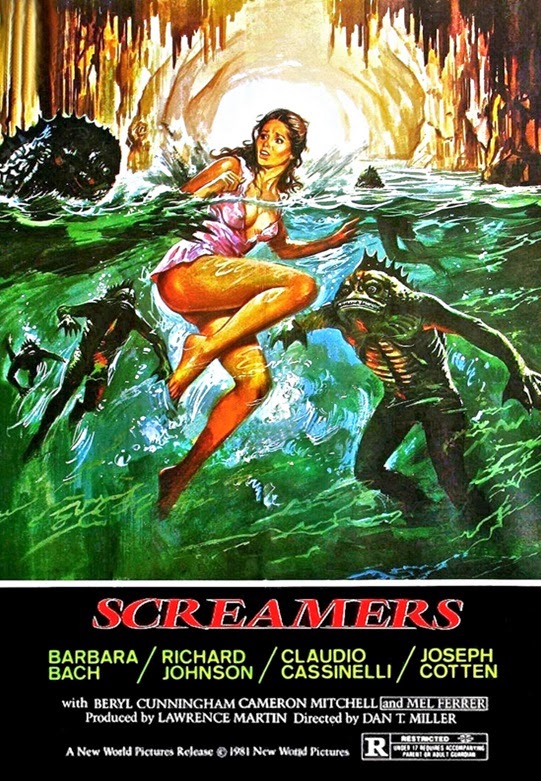 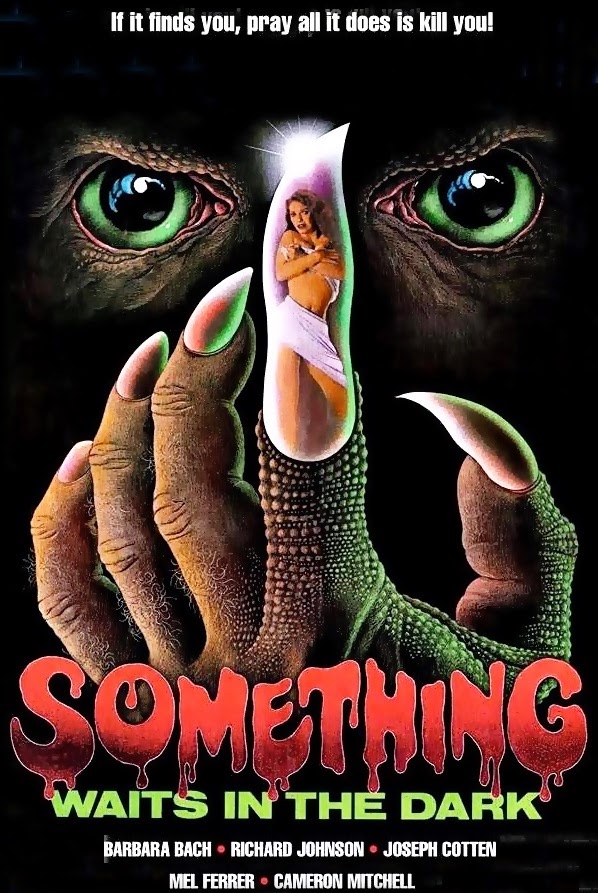 Wow I'm surprised Universal didn't raise a ruckus on that Gillman in the movie! The head is a bit *too* similar to the Universal Gillman. I would totally love to see this movie for those opening credits added.

Wait... so, this movie actually doesn't deliver on the "you'll see a man turned inside out" promise? Damn. I saw some posters for this movie around the Internet and that promise caught my attention :)

Yes it does look an awful lot like the old Gill Man! I think both versions of this one have their own special perks but I kind of liked the 'Screamers' version a little bit more.

Nope Piotr. I've read that some people were so pissed off about this back in the day they asked for refunds. I've also heard claims that some theater owners actually sent the print back to New World because of it!

Well, I'd ask for a refund, too :) I mean, I get hyperbolic marketing slogans, but these ads promised something quite literally and made a big point of it. It's not like I'm fascinated by gore or something, but such a promise is kind of eye-catching... ;)

I rented this one on VHS back when I was a kid and remember being bummed even then that the skeleton guy was never in the movie! I also notice they didn't include the "Be warned: You will actually see a man turned inside-out" line on the VHS box, so I guess they wanted to make it sound less like a guarantee. ha

Thanks so much for profiling this curious genre entry, back story and all. FYI, I think that the slimy corpse that is found at maybe 18:40 into the film (shown in your #12 screencap) is supposed to be the woman "Samantha" from prologue.