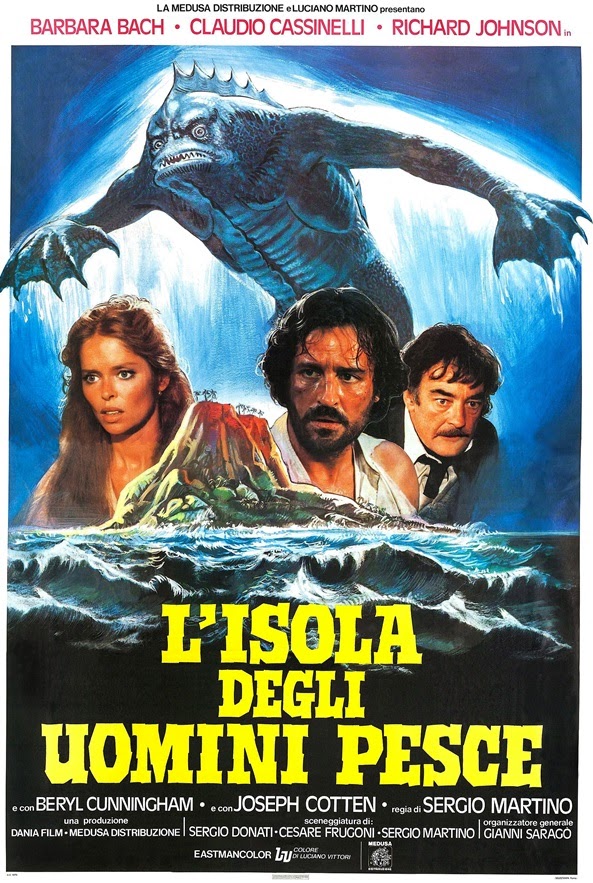 
Note: This review is for the original Italian version, filmed in 1978 and released theatrically in Italy in January, 1979 with a running time of around 99 minutes and not the later, revamped, shorter version released here in America by Roger Corman's New World Pictures under the title SCREAMERS. Since there are significant differences between the two films, I'll be reviewing them separately here.


In 1891, a prison ship is battered and sunk by something in the water. Most of the men are killed, but the few survivors find themselves on a nameless, uncharted tropical island with an active volcano on it. Claude de Ross (Claudio Cassinelli), a lieutenant and medical doctor on the ship, locates one of the prisoners - the injured José (Franco Iavarone) - on the beach and the two decide to head inland to look for water. Several other prisoners; crazy old-timer François (Franco Mazzieri), the dangerous and untrustworthy Peter (Roberto Posse) and Skip (Giuseppe Castellano), turn up, the men find fresh water and then François wanders off to look for food and turns up dead. Writing it off as an alligator attack (amusingly, Martino next made The Great Alligator featuring most of the same cast), the other men continue on. After Skip falls victim to the old spiked pit booby trap, the three survivors stumble upon an empty village with empty graves and signs that voodoo ceremonies have been conducted there.

The beautiful but unfriendly Amanda (Barbara Bach) shows up on horseback to try to warn the men away but, starving, they follow her back to her home, anyway. There, they meet Edmond Rackham (Richard Johnson), who wonders what they're doing on his island. Edmond's the type of guy who gets off on his power trip of being a big fish in a small pond, or as he likes to put it, "absolute master." He's more or less enslaved the remaining inhabitants of the island, who do his bidding, and likes to shout things like "I am the law!" when confronted with any kind of opposition. Amanda hates him. He's controlling, abusive and instantly jealous of Claude, whom he (rightfully) suspects is going to fall for her and vice versa. Still, he allows the men to stay, making an aside to Amanda that they won't be there for very long. In Peter and Jose's cases that turns out to be accurate as each are soon killed off. The only reason Claude is spared is because he's a doctor and of some use.

The deathly ill Professor Ernest Marvin (Joseph Cotten), a famous geneticist discredited by the science community for conducting sometimes lethal experiments on patients and thought dead by the world at large, eventually turns up in a secret room in the home. Edmond wants Claude to treat him, in hopes he'll recover and be able to continue on with his experiments. What experiments? Well, it all involves the island's other inhabits: an amphibian race of "fish men" who have scaly skin, googly eyes, razor-sharp teeth and claws and make noises like elephants. According to Edmond, the fish people are actually evolved humans descended from the original inhabitants of the lost city of Atlantis, which is located 2,000 feet underwater right off of the island. Marvin has developed a special "potion" that the fishies are addicted to and willing to trade pieces of a valuable treasure for. Junkie fish men monsters? Yeah, pretty much. Edmond, of course, wants to treasure all to himself so he's been keeping the professor and his daughter prisoner there, but there's more to the story than just that...

While nothing spectacular, this is a perfectly acceptable and enjoyable juvenile fantasy / adventure / monster movie very much in tune with the writings of Jules Verne and H.G. Wells (most notably the latter's "The Island of Dr. Moreau"), with a dash of H.P. Lovecraft and Creature from the Black Lagoon thrown in there as well. Production values are quite good for a film of this type, with nice photography, music and art direction. It was shot in some really beautiful locales, near where Lucio Fulci's Zombi 2 (also starring Johnson) was filmed. The cast - also including Beryl Cunningham as the Haitian voodoo priestess / servant Shakira and an unbilled Bobby Rhodes (who'd later get some attention playing "Tony the Pimp" in Demons) as one of Rackham's henchmen - is decent and the dubbing isn't terrible for a change. The monster suits / masks designed by Massimo Antonello Geleng aren't all that impressive but I've definitely seen far worse. And the build-up actually does end up going somewhere as the big finale is exciting and action-packed enough. If there's any major fault, it's that the story is slow-moving in spots and takes one too many detours in telling its simple story. The voodoo elements, for instance, really have little to do with the rest of it and the telepathic link Amanda shares with the creatures isn't fully realized. 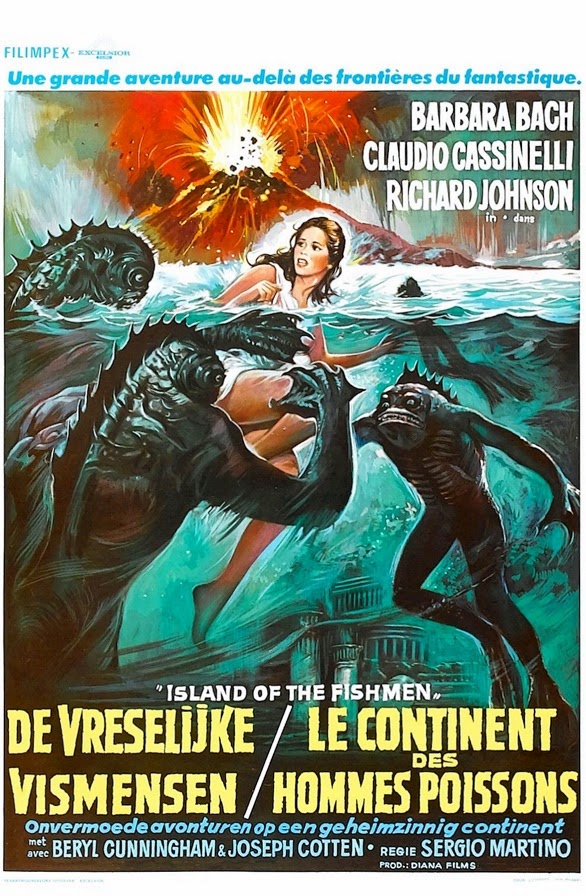 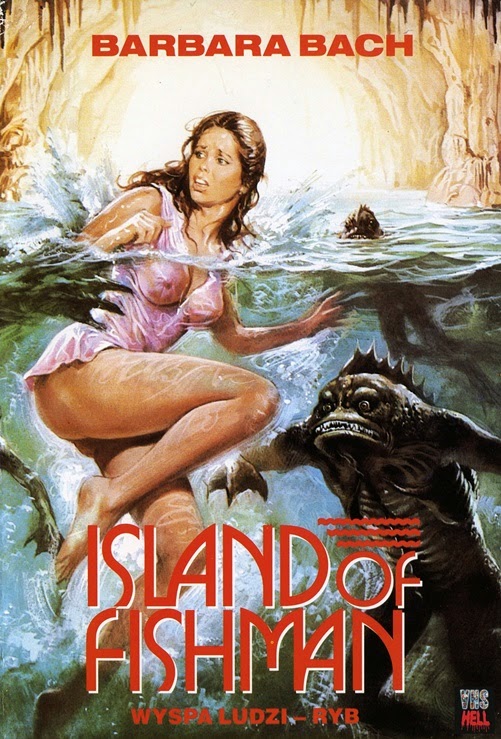 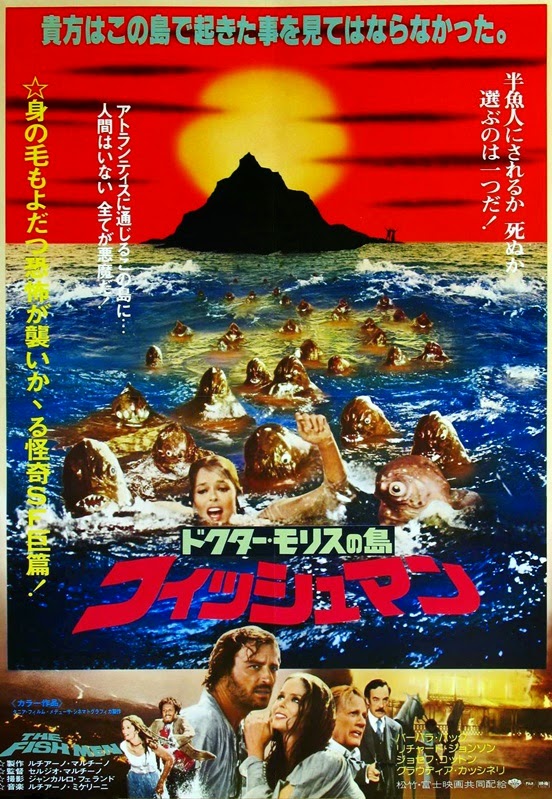 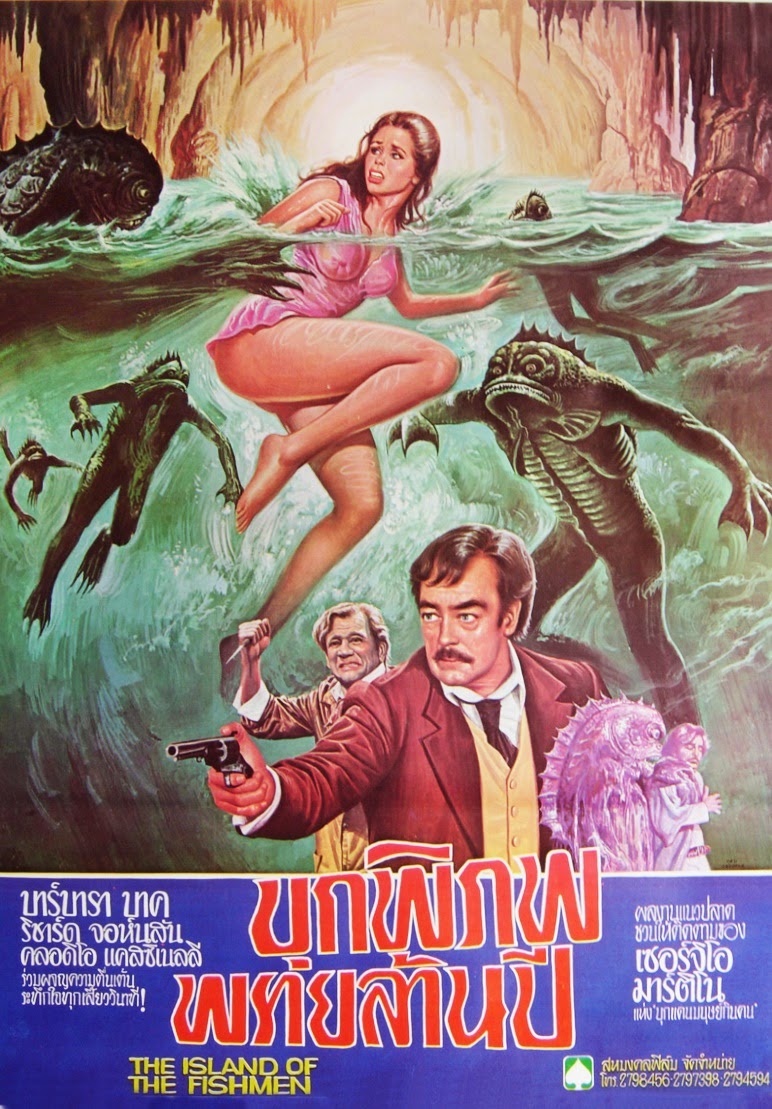 The original, non-tampered-with Italian version was unavailable in America for quite some time, though in 2009 it finally made it to DVD from Mya Communication. The UK video release (under the title Island of Mutations) from Vipco appears to be the original Italian cut, as does the VHS release (titled The Fish Men) on the Dutch label EVC. Fish Men was also the release title in Japan. Martino followed this up with the belated, barely-released sequel La regina degli uomini pesce ( aka The Fishmen and Their Queen) in 1995, which blends fantasy, horror and post apocalyptic sci-fi and is rumored to be pretty awful. In Germany, both of Martino's fish-man films were issued on one set.