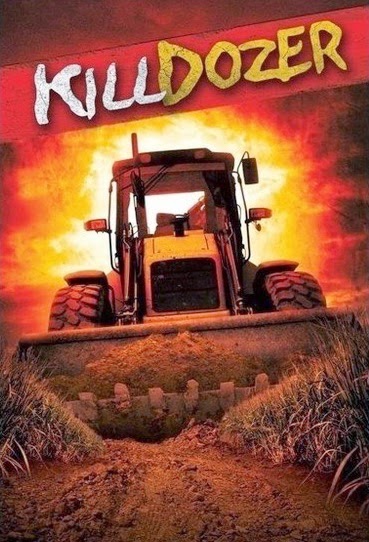 
You just gotta be somewhat amused by these wacky 1970s made-for-TV horror movies, which often went wayyyyyy outside the box in order to give audiences something they couldn't see on the big screen. The gimmicky subject matter ranged from ticked-off killer ants laying siege on a resort hotel (and - nooo! - eating Suzanne Somers) to a vicious werewolf haunting the grounds of Woodstock to a meek American woman transforming into a seductive German giant black widow spider to William Shatner as a drunk priest battling evil forces aboard a Trans-Atlantic night flight. The casting in these various films was almost always good and nearly all were filled with familiar guest stars. Every once in awhile one actually turned out to be a legitimately great film which was deserving of a theatrical release, as was the case with Spielberg's Duel (1971), both Kolchak movies starring Darren McGavin and Tobe Hooper's Salem's Lot (1979). However, these rare gems were certainly not the norm and most of these tele-terror films were just silly and campy. Others either attempted to rip off hit movies like THE EXORCIST (1973) and CARRIE (1976) or tried to cash in on then-topical news stories ranging from "Africanized" killer bees to the Bermuda Triangle legend. 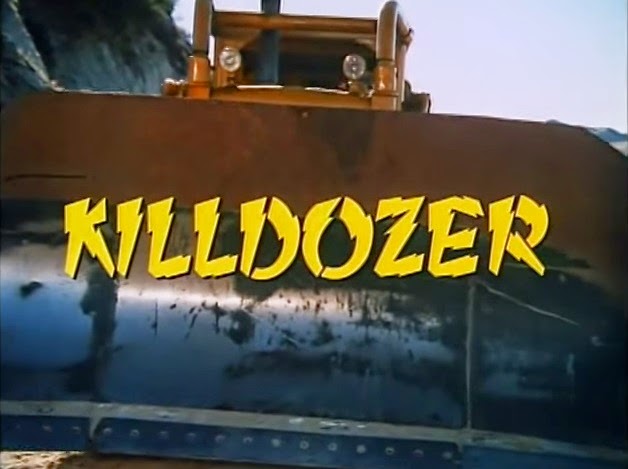 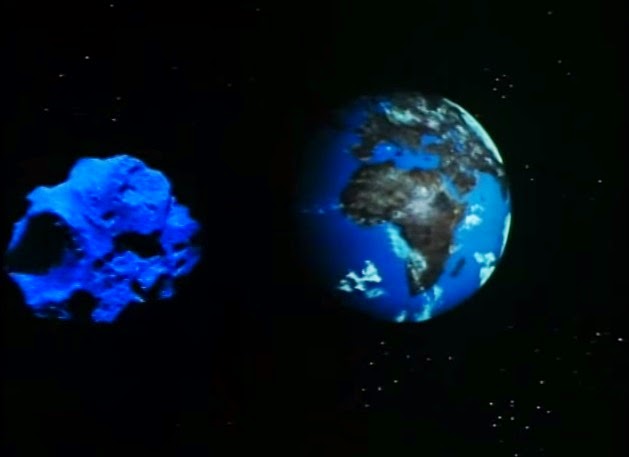 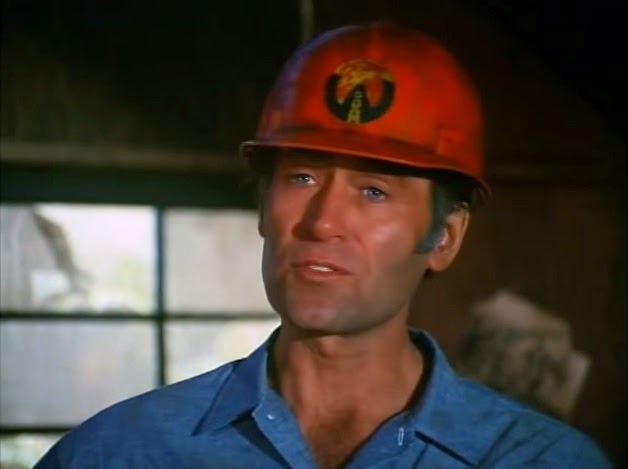 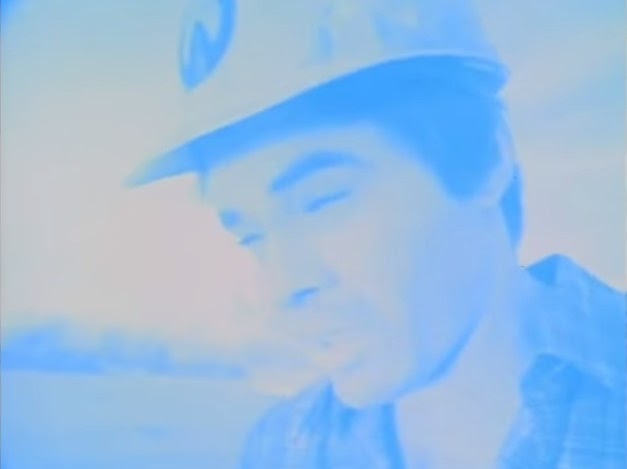 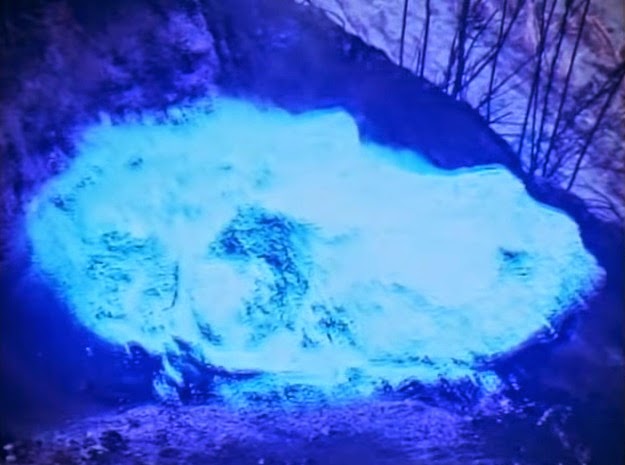 As was customary with many of these films, Killdozer keeps the cast minimal and the location compact to ensure the budget stays low, yet provides us with a truly unique premise. How unique? Well, I'll venture a guess and say this is likely the only film centering around an alien-possessed killer bulldozer! Unfortunately, the makers pretty much botch the idea. This was all based off a novella written by Theodore Sturgeon (who gets a co-screenplay credit) that was first published in a 1944 edition of Astounding Science Fiction magazine. Believe it or not, there was also a tie-in Marvel Comics adaptation released before the movie. Just the cover of the comic book itself (see below) is far more exciting-looking than anything you'll see in the actual movie! 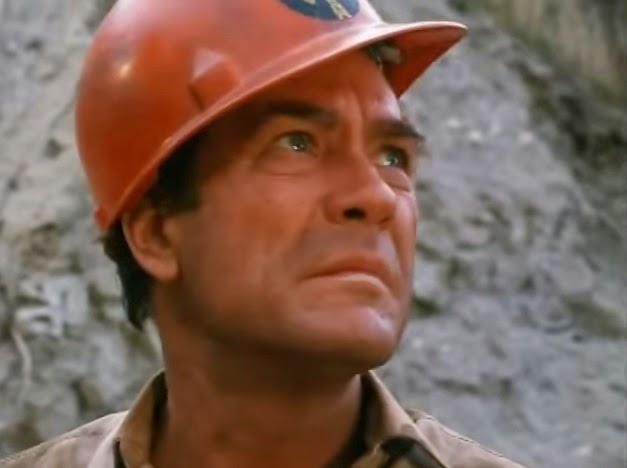 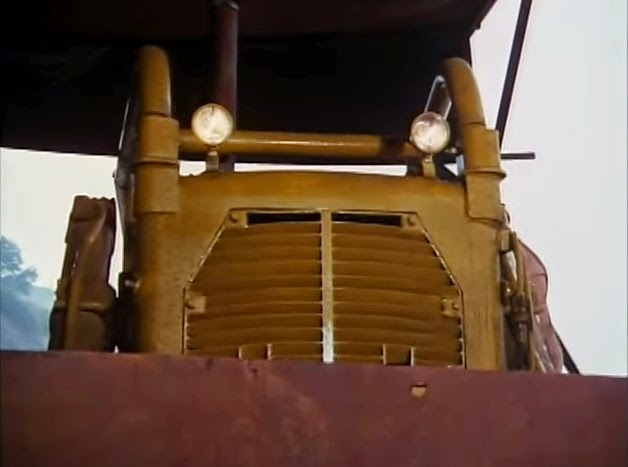 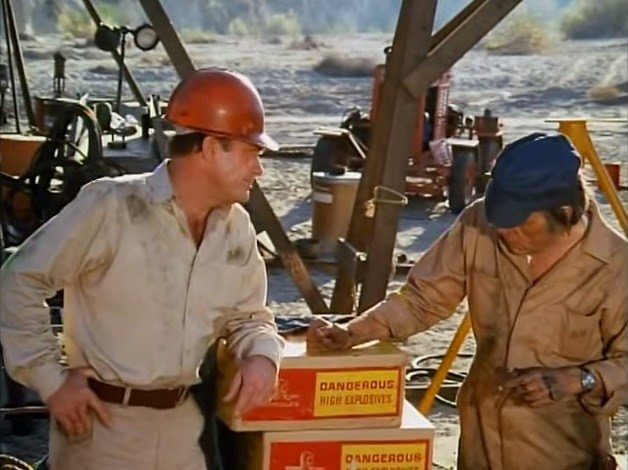 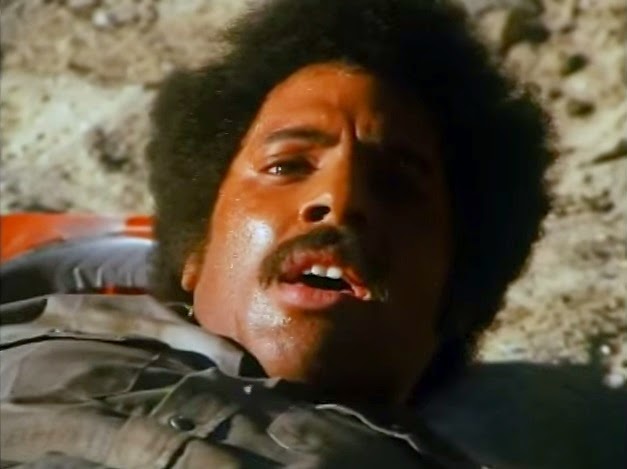 The setting is a small, unnamed island "two hundred miles off the coast of Africa" where a six-member construction crew are clearing off land so a company called Warburton (not to be confused with Haliburton) can set up a base camp and bring in equipment to drill for oil. While working, "dried out drunk" crew leader Lloyd Kelly (Clint Walker) and laborer Mac (a young Robert Urich) unearth a large metallic rock. When they attempt to move the rock (actually a fallen meteor), a blue light shoots from it right into the bulldozer. Mac is also infected by the light and dies soon after. The bad news for the others is that transport won't be back to get them for another five days so they "might as well be on the moon." 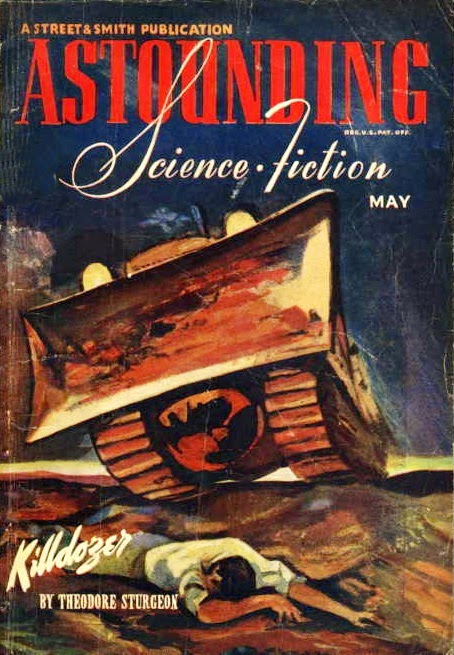 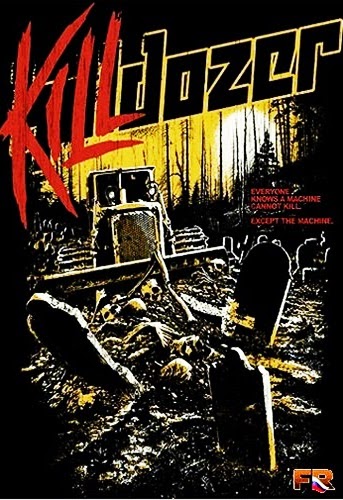 The possessed "killdozer" makes a faint humming sound, has two glowing lights positioned to look like eyeballs, drives and operates all by itself and has a mind of its own intent on killing. Why? Well, we never quite know for sure. The men - also including Carl Betz as a smart ass shovel operator and Neville Brand as a cigar-smoking mechanic - attempt to cut the fuel line and damage it in various ways, but nothing seems to stop it. The dozer smashes up their camp, destroys their communication equipment and begins killing the guys off one by one, leading the survivors to concoct a last-ditch plan utilizing electric currents. 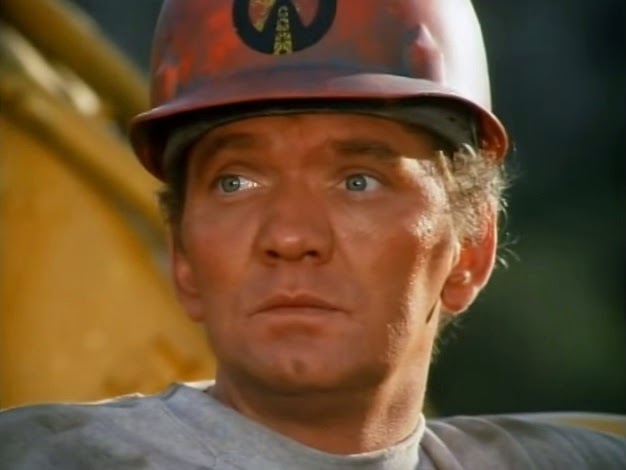 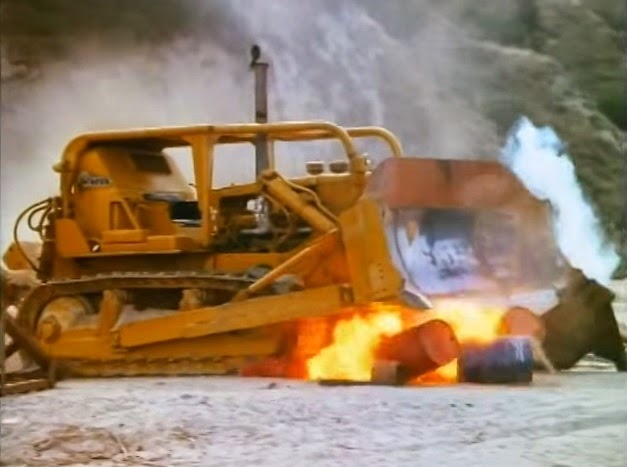 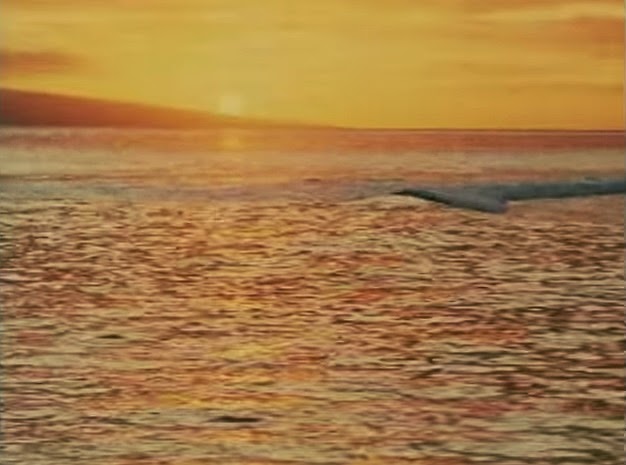 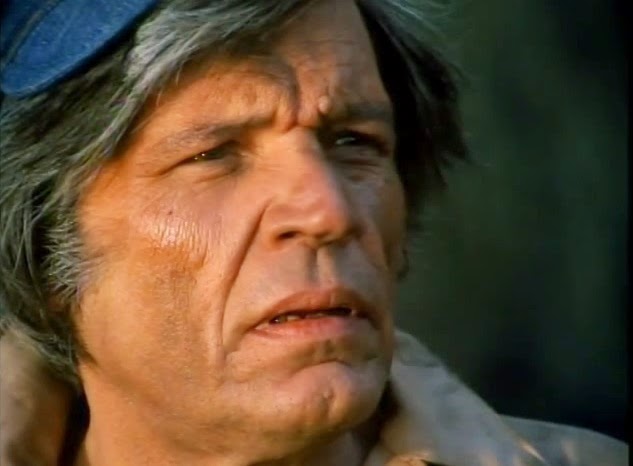 Though I like the general idea behind this movie, the concept doesn't work at all for the simple reason that the central killing machine is slow, loud, clunky and awkward, and thus completely non-threatening. This not only inhibits the potential to generate exciting action set pieces (though a more talented director possibly could have pulled it off) but it also requires the characters to behave like utter morons in order to get killed off. During one scene, the dozer slowly approaches one of the guys so he climbs inside an aluminum pipe to hide and - surprise! - the dozer just rolls over it and crushes him. During another sequence one of the men is in a jeep with the dozer at least a hundred feet away and he just sits in his seat as it slowly approaches and then just lets it roll right over him! And then there's a silly moment where the dozer gently tips over a truck and it miraculously explodes. 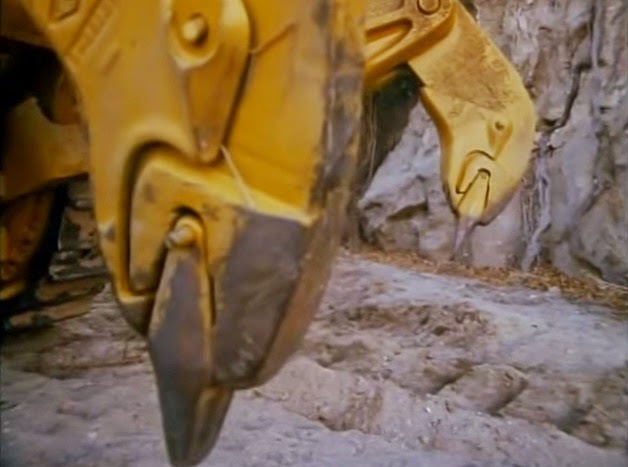 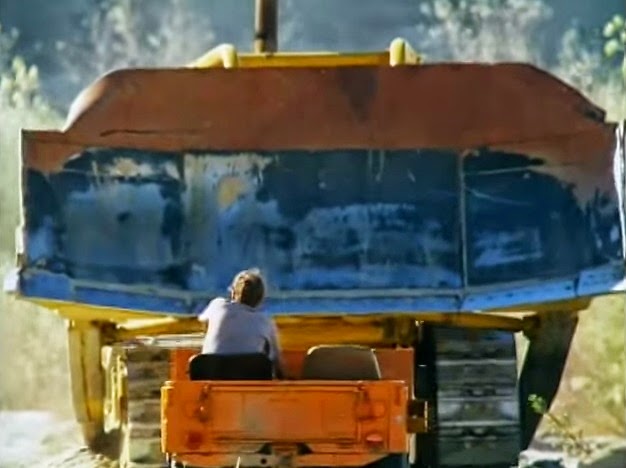 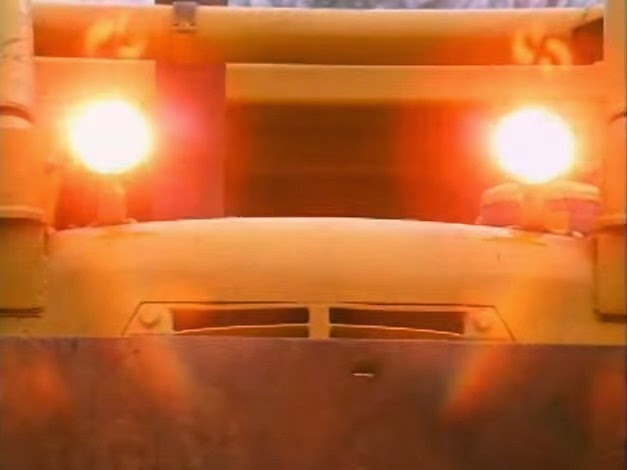 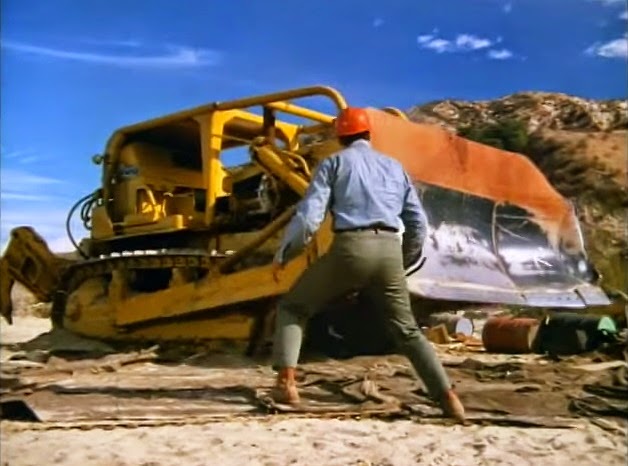 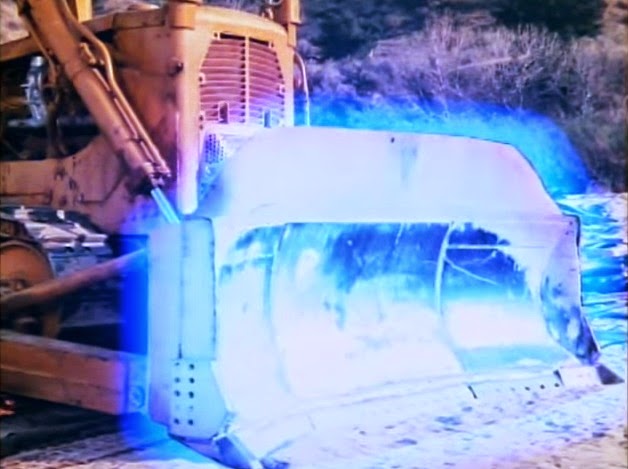 Corny dialogue and poor characterizations don't help matters and neither does the setting. The island the men are trapped on isn't a flat plot of land; you can see high, steep, rock-covered hills all over the place that I seriously doubt the dozer could reach. And even if it could, it would be a slow trip up there that would give the men plenty of time to move on somewhere else. Or better yet, they're on an island for Christ's sake, so why not just build a raft or go take a swim until help arrives? It's also worth noting that the guys mention a supply ship will be there in less than a day, yet they still frantically run all over the island making themselves vulnerable. I guess one shouldn't expect logic in a movie about a killer bulldozer, but it wouldn't have hurt matters either, right?