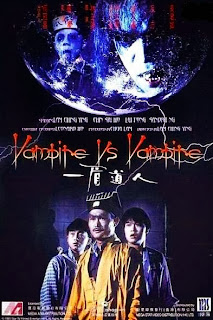 
The official Mr. Vampire series consists of four eponymous titles produced between 1985 and 1988, plus Xin jiang shi xian sheng (1992), which was also released as Mr. Vampire 5, Mr. Vampire 1992 or Chinese Vampire Story. All five of those were directed by Ricky Lau for Golden Harvest and all but one starred the wonderful Ching-Ying Lam as a "one eyebrow" vampire buster (usually a priest). The series also had many spin-offs which closely copied the winning format and were titled to try to cash-in on the popular series. Wei Tung's excellent MAGIC COP (1990), which also starred Lam, was re-titled Mr. Vampire 5 in some quarters, causing confusion with the other Part 5. Released the same year as the second official Mr. Vampire film was Billy Chan's Jiang shi fan sheng (1986), which was released as Kung Fu Vampire Buster some places and as New Mr. Vampire in others. Three years later came this one; originally Yi men dao renon, and released as a sequel to Chan's film (New Mr. Vampire 2), or (under the title I watched) Vampire vs. Vampire. Another well-produced Golden Harvest production, this one fits in perfectly with the official 5-part series thanks to its similar tone and the presence of Lam in the lead role. He also got to direct this time out, as well. 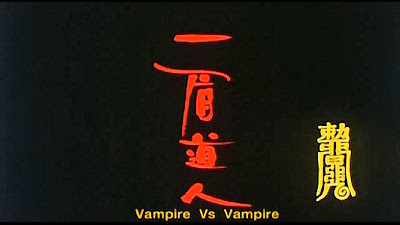 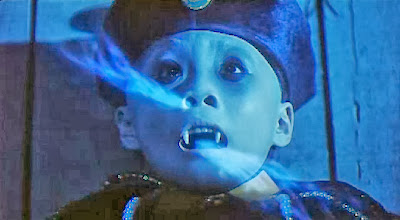 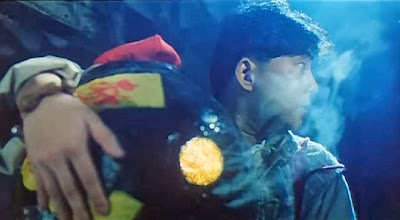 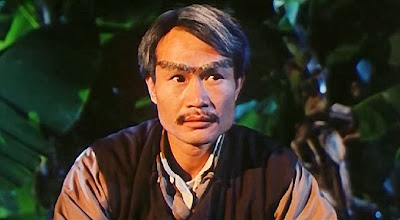 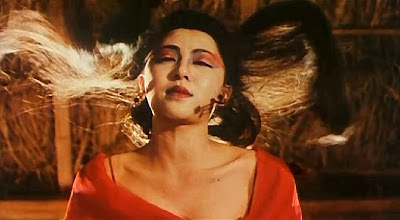 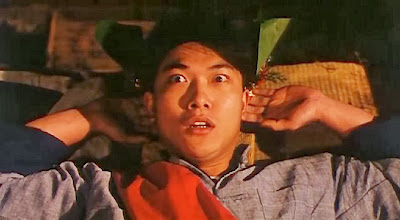 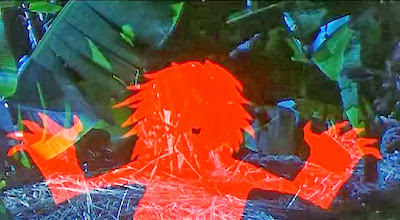 The format is laid out almost identically to the other films: even-keeled, experienced, cool-as-a-cucumber priest + bumbling, immature young assistants who can't seem to stay out of trouble + various evil fiends to do battle with = excuse for lots of juvenile comedy, crazy special effects and elaborate stunt / wire / martial arts action.

Things open with a long comic set-piece with young understudies Hoh (Siu-hou Chin) and Fong (Fong Liu) having to fix a chapel roof. Moonlight (which animates the dead) gets in, some black gunk oozes from an urn and a slimy, fanged little puppet monster emerges from it. A tame, bouncing little boy vampire who is fine with just eating tomatoes also escapes from his casket and is involved in some cutesy slapstick scenes accompanied by comic sound effects. Frantic Chi Lei Kan (Yuet Sang Chin) shows up next asking for help after his brother is bewitched by a love-hungry female "palm ghost" (So Yip). And then there's another female ghost (Yuk-Ting Lau), a singer who had acid thrown in her face by her pimp. Her body must be located and laid to rest or else her spirit will continue to haunt the area. If this all sounds rather episodic, it's because, well, it is. 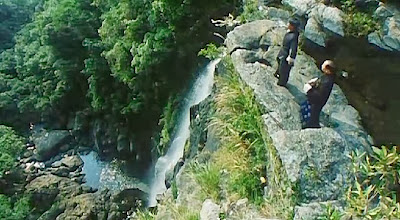 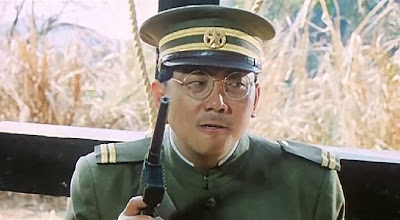 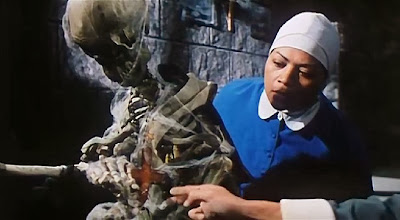 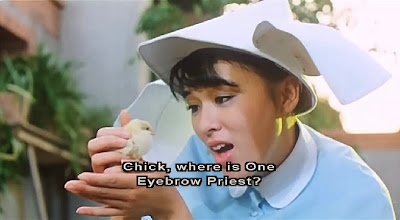 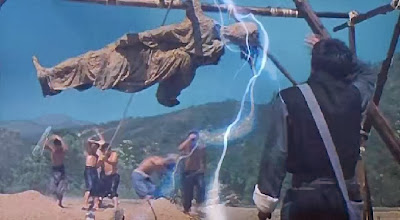 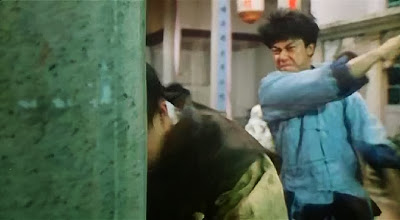 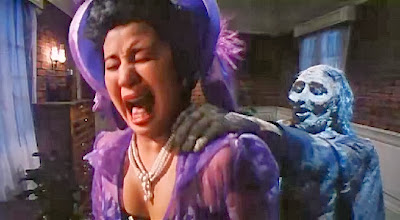 Thankfully, enough of a central story begins to take shape upon the arrival of a bunch of new people to the area who are planning on starting a village there. One Eyebrow Priest and his boys are in charge of using fung shui to help find them the ideal spot to start building. Meanwhile, Mother Superior (Maria Cordero) and four young nuns take over an abandoned, bat-infested church that used to be occupied by Satan-worshipping priest Father Kei, who's since disappeared. The mummified, fanged priest is eventually unearthed while the land is being excavated and he has a silver, ruby-encrusted cross wedged in his chest. A greedy general (Billy Lau) and his prissy cousin (Sandra Ng) decide to remove the cross. The general accidentally cuts himself while doing so, starts bleeding over the corpse and brings the evil priest back to life. He quickly turns the cousin into a vampire and then flees to some temple ruins to bring his lost love back. Our heroes must set about stopping the powerful zombie-vampire and all the resulting vampires. 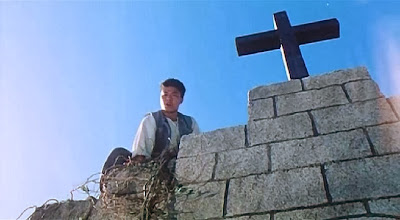 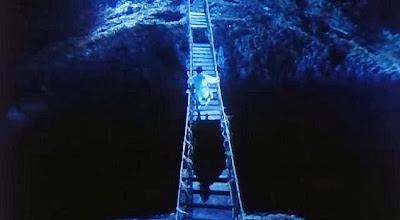 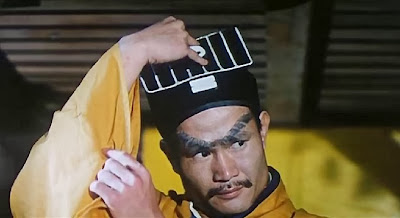 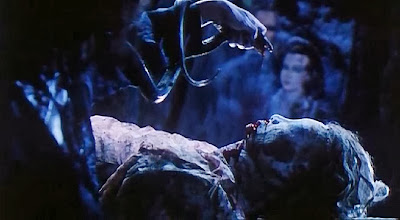 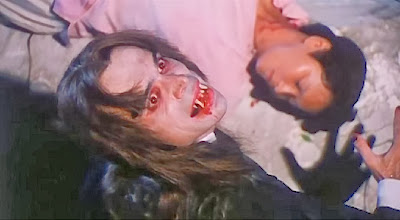 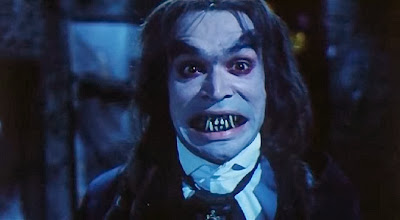 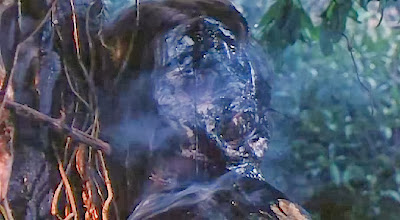 A little unfocused and slow to get started (so hang in there a bit), Vampire vs. Vampire ends up being a successful, rousing and extremely fun blending of horror, action and comedy. The English release title is likely in reference to its novel merging of Asian and European vampire mythology; with the little vampire boy (kept in check by spell paper taped to the forehead) representing the former and the revived priest (who is weakened by garlic, crucifixes and sunlight, unlike his usual Asian counterpart) representing the latter. The comedy elements are a bit hit-or-miss, but when they hit they're pretty damn hilarious. All of the action scenes are great; very well-choreographed, directed and edited, and just plain fun to watch. The make-up and special effects are also very good and some amusing characters (especially the lead nun) add to the enjoyment. Some standout scenes include a vampire bat attack on the church (one of the best of such scenes I've seen), and the finale, where the Taoist priest and the vampire priest face off in the forest by some quicksand pits.

yeah, i loved this. have to admit, for the first 30 minutes i was wondering where all the good reviews were coming from. an hour left, everything begins to jell and never lets up. the bat-attack on the church was amazing. dunno why i saved this for so long, it's not like it's possible to run out of 80s HK ghost/vamp comedies. another featuring a 'western'-type bloodsucker was jamie luk's DR. VAMPIRE from late 1990 (imdb wrongly calls it 1991). i wasn't impressed by it, though that was so long ago i'm not sure why.

I really do like many of these HK horror-comedies. When they don't work they're some of the hardest movies to get through but when they do they're great! I own a copy of Doctor Vampire but haven't gotten around to watching it yet. I think the copy I have is pretty bad quality so that hasn't lit a fire under my ass to check it out.

'golden age' HK addict here. just checked: my DOCTOR VAMPIRE is the old WA DVD (chinese, c. 2001). looks good, and widescreen, but mandarin only (a killer) with english subs. the sloppily cut-down artwork (and disc) misidentifies the release year as 1989. looks like joy-sales put out a DVD in '08 as part of their 'legendary collection'. that'll have the cantonese track.

I'll have to dig my copy out and see who released it. I think the same company released a really awful version of Franco's 'Devil Hunter' (maybe Videoasia?) that I have but I'll have to double check.