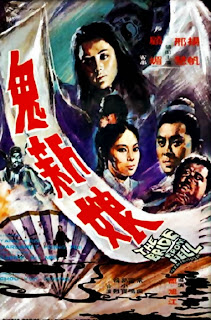 
While traveling through the mountains, young nobleman Yunpeng Nie (Yang "Fan" / Fang) and his tubby sidekick Dahuozi Shui (Got Siu-Bo) get lost. After briefly encountering a solemn female ghost standing by a lake, they venture deeper into the woods, stumble upon a home and basically invite themselves in to spend the night. While snooping around, Yunpeng encounters Anu (Margaret Hsing Hui), the lady of the house, sleeping nude in bed. Because he's already seen her naked and that will just damage her reputation and make her unworthy of being anyone else's wife, Yunpeng offers his hand in marriage as compensation. (Who would have guessed that courting was much easier on the single's scene in feudal Japan than it is nowadays? Screw match.com and the bars; just show your bare ass to the first available bachelor who strolls your way and he'll be forced to marry you!) Anu's pretty maid Yin-erh Wei (Ha Kong) unfortunately gets the bad end of the deal when Dahuozi stumbles upon her naked in bed. The two men and their new brides then return to their village and go through their bow-fifty-times wedding ceremonies. It isn't long after that Yunpeng realizes that his new bride isn't quite what she seems...

Anu appears shy at first, but that's only because she has no interest in meeting hubby's extended family. Once the family does lay eyes on her, the older ones immediately recognize her and run off. That's because she's actually a ghost. One of Yunpeng's aunties makes her nephew a special robe with the image of demon catcher Zhong Kui (Chang I-Fei) sewn into the back. When Anu sees it, the ghost-self projects out of her body and she's forced into facing Zhong - who grows to giant size, tries to spear her with his giant sword and then tries to Godzilla stomp on her with his giant foot - but she's able to escape and burn the robe. Anu also refuses to go to cemeteries because she claims they scare her. While at the village graveyard, Yunpeng meets up with Taoist Master Taiyi (Seung Fung), expert in Fung Shui, astrology and fortune telling. Through him, Yunpeng learns that his wife is actually a woman named Aijiao Feng who, 20 years earlier, watched her parents being slain by three men. Afterward, the guys also murdered her and, for an encore, raped her dead body. I was going to dub this "I Married a Ghost" but "I Married a Ghost Who Wants Revenge on the Slobs Who Fucked Her Corpse" has a much better ring to it.

Despite all of this new information and his new bride behaving strangely and abnormally, Yunpeng still refuses to believe Anu is a ghost. The villagers aren't so complacent and drag her off to the ocean, where they tie her to a stake and plot to either burn her to death or stone her. Village elder Uncle Yang prays to their God for advice on what to do and he materializes in the sky and reprieves Anu, so they let her free. Some of the elder village men - the ones responsible for Aijiao / Anu's murder - end up being visited by the ghost and are killed. One is strangled to death in a cemetery. Another bangs his head against a wall and falls over dead. In the film's only standout sequence, the third murderer's soul is sucked out of his body, shrunk and then becomes trapped on the ghost's paper fan, which is later burned. Master Taiyi pops back up at the end to chase the ghostess around while obnoxiously ringing a bell.

This was one of the earliest Shaw Brothers horror efforts and was made before they perfected their brand of crazy / gory genre offerings with standout films from talented directors like Chih-Hung Kuei (THE BOXER'S OMEN) and Meng Hua Ho (BLACK MAGIC). Bride does have its own dubious distinction: not only does it fail, it fails in four distinctive ways. It sucks as a drama because the writing and acting aren't very good. It sucks as a doomed romance because forced, hoary melodrama is a poor substitute for plot and characterization. It sucks as a horror film because the tone is all over the place and it fails to generate suspense and atmosphere. And, perhaps most painfully of all, it sucks at being a comedy. Dahuozi's brand of double-take, constantly-mugging comedy is about as irritating and unfunny as it gets. Not really the poor actor's fault; the gags and dialogue are just that consistently lame. Strangely enough, despite all of the genres this touches upon, it is currently listed on IMDb as being a "mystery;" one of the only things it is really not.

To add insult to injury, the special effects are also pretty poor. There's only minor wire work for the ghost flying scenes and terrible miniature people burning that look like rag dolls set ablaze (probably cause they are rag dolls set ablaze). Instead of using a make-up application for the ghost, they simply light her face green. The editing jump cuts when the ghost appears and disappears are extremely choppy and amateurishly done with seemingly no consideration for continuity. Even the various ghost-fighting methods - usually one of the more amusing angles of these Asian ghost films - are weak. This one has a flute to call forth ghosts, a peach wood sword to drive them away and other things going on but they're usually used in just one throwaway scene and then forgotten about.

Lead actress Hsing (who shows breasts and ass twice) led a pretty interesting life. She trained extensively at the New Method College, then joined the Southern Drama Group and made her debut in Shaw Productions in 1966, where she'd remain until 1973. Afterward, she married a doctor and relocated to the U.S.. Hsing wouldn't be heard from again until 1994 when she made headlines for murdering her own mother with an axe!! She spent a year in a mental institution before being sentenced to eleven years in prison and passed away in 2009 soon after being released. Director Chow Yuk-Kong (or Hsu Chiang Chou), who'd previously made The Enchanting Ghost (1970), used the alias "John H. Chow" for this one.