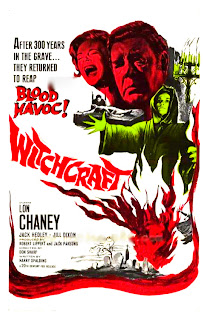 In my small hometown, there was a very old hotel located near the heart of the city that had been around since the early 1800s (nearly 200 years). It was finally demolished a few years back and I found my reaction to that a little bit surprising; I was a little upset and not entirely sure why. Perhaps because it was a familiar landmark I remember since childhood (after all - at five stories high - it was easily the largest structure in town) or perhaps because I recalled so many old black-and-white pictures of the place in its heyday. I wondered what this place was like when it was first built and it's hard to say who'd stayed there over the years. After all, where I come from is along the Ohio River, which was a popular route of travel for European settlers and political figures during the 19th century. Sure, the place was run down, possibly had major structural damage and was rumored to be filled with vagrants, bums and drug addicts, but deep down inside I hated the fact that no one bothered to restore or renovate it. You know, save it; save a piece of history. But I guess that's what we call progress; tearing down the old to make way for the new (though in this case, in place of the now-extinct hotel is just a vacant and usually overgrown lot). 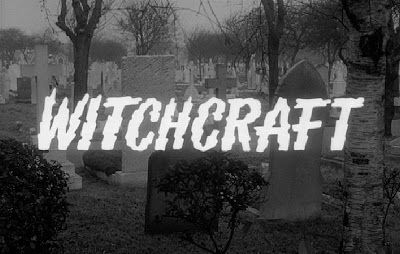 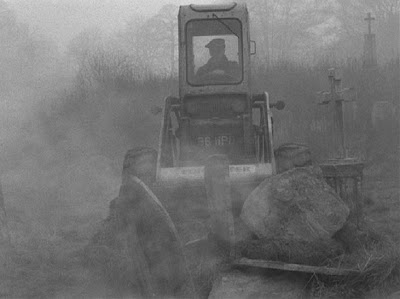 Witchcraft is about (at least in part) the perils of progress and how 'making way for the new' with no reverence for, or undestanding of, the old, can lead to disasterous consequences. The film opens with the distressing sight of a bulldozer leveling ground in a cemetery, crushing tombstones in its path. Morgan Whitlock (Lon Chaney Jr.) is understandably furious since his family plot, which had been there for centuries, has just been destroyed. He'd already been warned numerous times that developers who purchased the land were planning to build new houses there (the town is having a sudden population boost) and was given the opportunity to relocate the graves, but Morgan was unwilling to budge. After all, many of his ancestors are buried there. And since his ancestors are witches and warlocks, he definitely knows it's not a bright idea to desecrate their resting places. 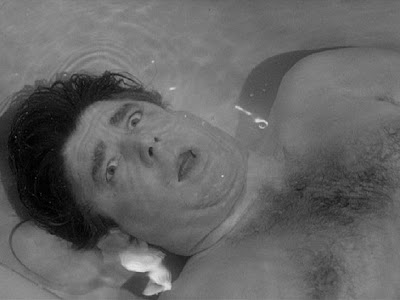 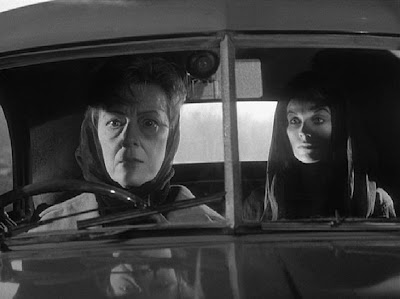 Wealthy land developer Bill Lanier (Jack Hedley), whose business partner Myles Forrester (Barry Lineham) was actually the one to OK the bulldozing over the Whitlock graves, and his family are then promptly haunted by the ghost of 17th Century witch Vanessa Whitlock (Yvette Rees), a great-great-great-great (or maybe great-great-great-great-great) grandmother of Morgan's. As rumor has it, Vanessa had been captured by townsfolk and buried alive for practicing the black arts. Those responsible for her early entombment were distant relatives of the Lanier clan, so needless to say Vanessa has a bone to pick with the Lanier descendants. Bill, along with his former tennis champion wife Tracy (Jill Dixon), his aunt Helen (Viola Keats), his younger brother Todd (David Weston) and his elderly grandmother Malvina (Marie Ney), who refuses to walk and hasn't left her bedroom since her husband died, all become targets. 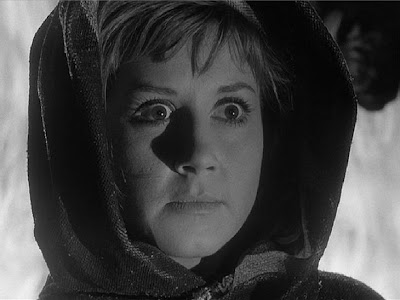 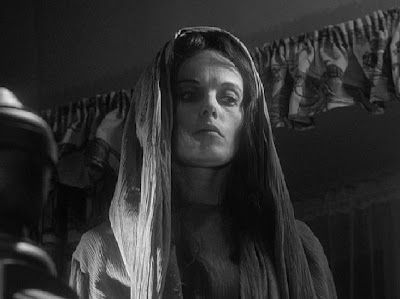 To add extra complications, Todd has fallen in love with Morgan's niece Amy (Diane Clare), and members of both families frown upon the relationship. Vanessa uses "devil dolls" (voodoo dolls) to start killing people off. She drowns Forrester in his bathtub, makes Helen drive off a cliff and attempts to make Bill and Todd do the same. While the two men are away on business, Vanessa, Morgan and the rest of the 'circle of thirteen' (local devil worshippers) decide to strike out at the other Lanier family members. Malvina (who finally musters up the courage to get out of her chair and walk) is pushed down the stairs and Tracy ends up drugged drugged and tied to a sacrificial altar. Naturally the men show up just in the nick of time. 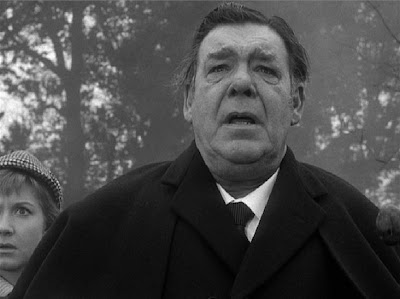 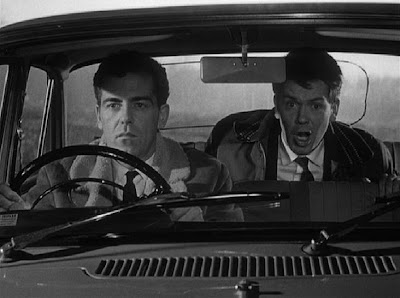 Though competently-made by Don Sharp (KISS OF THE VAMPIRE), this is lacking the wry black humor, thoughtfulness and intellectualism that made some other British Satanism / witchcraft movies from around this time - CURSE OF THE DEMON (1957) or NIGHT OF THE EAGLE (1962), for instance - so memorable. It's also a bit jumbled when you look past the sometimes handsome black-and-white images (the witch walking through a rainy cemetery, Satanists marching in single file through the woods, the witch slowly creeping up behind Malvina on the stairs, etc.). The film seems to finally side with the developers (the 'progress') who've trashed the cemetery, by revealing Morgan to be an evil warlock who doesn't mind sacrificing his neighbors' lives. And poor confused Amy, who decides to abide by her uncle and the old customs, pays the ultimate price for doing so. Even more interestingly, Amy is willing to risk her life by setting fire to the Satanic altar in an effort to save Todd, but Todd is unwilling to enter a burning building to try to save hers. 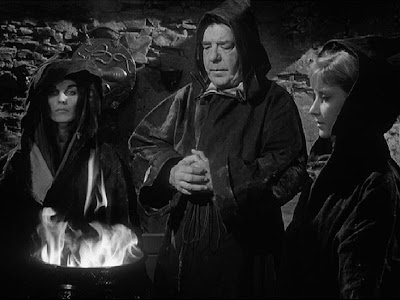 This film played theatrically in America on a double-bill with THE HORROR OF IT ALL (1963) and used a special "ghost deflector" gimmick (which was nothing more than a little green badge). It never saw the light of day on VHS and was forgotten for a very long time. MGM finally unearthed it for a belated DVD release where it was part of their Midnite Movies line and paired with DEVILS OF DARKNESS (1966). 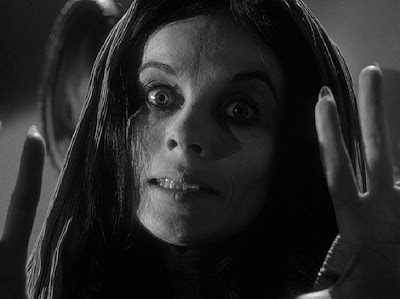 While nothing special (which might account for its long-delayed home viewing debut), it's well-acted (sharp-featured Rees is particularly well-cast as the witch), nicely-photographed (by Arthur Lavis) and lit and makes good use of shadow and fog. It's also interesting to see Chaney in a British genre production, though his role is actually smaller than his top billing might lead one to believe. Prolific character actress Marianne Stone also has a small role as a secretary.

This is a solid British film.the use of light and shadows is always good.a classic still!

Great atmospheric film. Innocuous but effective. Old-timey but still creepy. Coming out on bluray in less than two months! Can't wait, one of my favorites!