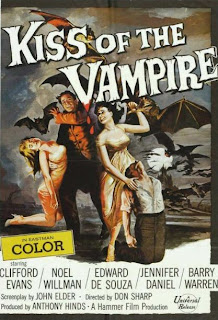 Directed by:
Don Sharp
KISS OF THE VAMPIRE (also shown in an extended TV version called KISS OF EVIL, with newly added scenes) has one of the greatest opening sequences of any Hammer film. At a solemn funeral, a casket is slowly lowered into the ground, the priest says a few words and elderly women shed a few quiet tears. At this point a stern-looking man in a top hat, presumably the father of the victim, slowly approaches the coffin. He sprinkles a little holy water over the grave and is handed a shovel. Instead of filling it in with dirt as expected, he suddenly heaves the shovel right into the casket! There's a scream, blood gushes out and then we get a brief peak of what's inside the casket... a lady vampire, of course!
So you have a pretty good idea what kind of problems newlywed couple Gerald (Edward De Souza) and Marianne Harcourt (Jennifer Daniel) are going to face when they run out of petrol and become stranded in the same small European village. While they wait a fuel delivery, they rent a room in a nearly-abandoned inn run by a friendly old chap named Bruno (Peter Madden) and his miserable looking wife Anna (Vera Cook), and then decide to take up an invitation for dinner and drink at the castle home of the worldly, wealthy Dr. Ravna (Noel Willman).
It comes as no surprise that the sophisticated doctor and his two good-looking, seductive grown kids Sabena (Jacquie Wallis) and Carl (Barry Warren) are actually vampires looking for new victims/recruits. The interesting aspect here is that there's a whole cult of bloodsuckers who eventually gather at the castle for a masked costume ball that leads to an initiation ceremony where everyone wears white robes. When Marianne turns up missing at the party, Gerald is thrown out of the castle and finds everyone in the village is either too scared or too far in denial, to be of any help. That is, everyone except for the scruffy, heavy-drinking Professor Zimmer (Clifford Evans), who has a bone or two to pick with the family of bloodsuckers. Can Marianne be saved? And what part do vampire bats play in all this?
Hammer made many vampire movies from the late 1950s to the mid 1970s, but to their credit they always had the sense to add new twists to the formula. This one does just that, yet retains all the expected quality elements (effective period atmosphere, excellent photography, lavish costumes and sets, etc.) that made the studio famous. This is one of the lesser discussed of their vampire movies, probably because two well-known genre actors (guess who?) are nowhere to be found. And as much as I like seeing those two fine actors, I think Willman and Evans do just fine filling in for them. The younger cast members are all appealing and attractive. For my money, Edward de Souza was one of the best of Hammer's younger leading actors. Too bad he only did two films for them (this one and PHANTOM OF THE OPERA). Isobel Black (TWINS OF EVIL) has a small, but nice, role in the film as well.
★★1/2
Posted by The Bloody Pit of Horror at 10:29 PM