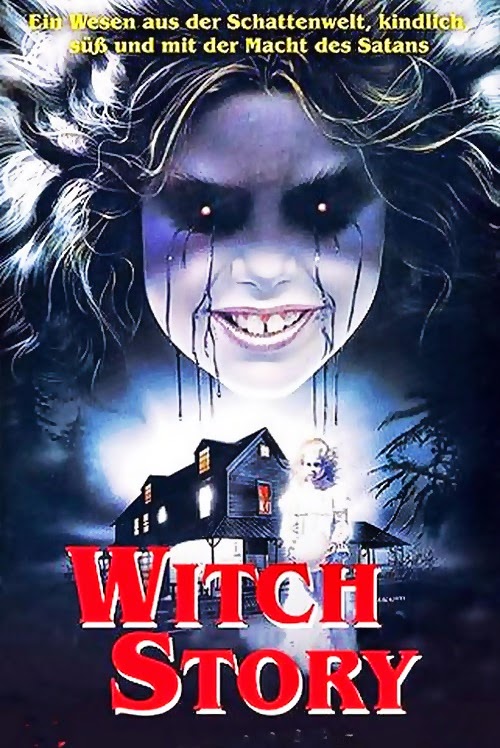 Thanks to the huge success of Kevin Tenney's Witchboard (1986) and George Miller's The Witches of Eastwick (1987), there was a brief boom in witch-themed (and titled) movies during the later part of the decade that lasted well into the 90s. There was the TV movie Bay Coven (1987), the Filmirage production WITCHERY (1988) starring the amusing duo of Linda Blair and David Hasselhoff, as well as WITCHCRAFT (1988), WITCHCRAFT II: THE TEMPTRESS (1989) and eleven more in that particular series, Spellbinder (1988), Teen Witch (1989), WITCHTRAP (1989) and others. Most of these movies seemed to do well on video and cable simply by having the word 'witch' in their title. A few others weren't so lucky. Case in point is the obscure Witch Story. Never officially released in America, this Italian / U.S. co-production (filmed in both Florida and Rome) is actually somewhat better than many of the above-listed, widely-distributed 'witch' films. It's certainly much better than any of those wretched Witchcraft movies, for instance. Not to say this is good by any means because it's not. The film is saddled with a muddled, confusing plot, several flagrantly annoying characters and abysmal acting from most of the cast. However, the film has fair production values, decent camerawork and at least some sense of visual style.

Things begin in 1932 in Micanopy, Florida. Helena Hayes (Deanna Lund), a witch, is hunted down by a torch-carrying posse. She's called "Satan's whore," has a cross thrust in her face, is stabbed through the leg with a pitchfork, gets branded on the chest and is chained to a tree, covered in gasoline and set on fire... and all in front of her young daughter Rachel (Suzanne Law). A priest, Father Matthew, tries to intervene in her killing, but is pushed away before he can do anything. Before dying, Helena curses her attackers and their children. Not long after, little Rachel decides to leap to her death through a window. Having been the daughter of a witch, she could never find anyone to play with her, but she'll try to make up for this later.

Now we jump ahead to 1989. Newly orphaned siblings Carol (Michelle Vannucchi) and Ed (Gary Kerr) - whose parents were mysteriously murdered - find a deed to a property their father owned in Florida. The two, along with six of their friends, take a bus from their home state of New York down South to check the place out. Before reaching their destination, a few of them encounter a weird priest, whose eyes bleed simply by looking at a picture of their inherited home. He warns them to turn around before it's too late, they decide to just brush it off ("He must have seen too many reruns of The Exorcist!") and go about their plans. Arriving in Florida, the gang meet up with Carol and Ed's distant cousin Simona (Nancie Sanderson), and she leads them to the secluded and run-down home, which hasn't been occupied for fifty years. Naturally, the place is the same home where Helena was torched and Rachel committed suicide. Predictable supernatural carnage ensues as a couple of them are possessed and everyone else is killed off. The two who manage to survive decide to go locate now-elderly Father Matthew (Ian Bannen) in hopes that he can somehow help them.

Special mention certainly must be made of the idiotic characters. Gloria (Charon Butler) - the black female in the group - proclaims "I'm 21 years old and I'm black!" when asked to describe herself and is naturally extremely sassy. But that gross stereotype is nothing compared to the depiction of the 'comic relief fat guy,' Paul (Jason M. Lefkowitz). Not only is he incredibly obnoxious, but there are constant jokes centered around what a disgusting slob he is. He burps, farts, eats with his mouth open, screams for no reason, constantly stuffs junk food into his mouth, pukes up KFC coleslaw, eats jelly out of a jar with his fingers and sleeps with a bag of potato chips under his arm. His "friends" lovingly refer to him as "Fatso." Funny it is not. The other victims falls into the expected 80s archetypes; geek, blonde slut (who strips down to her bra and panties and dances on the dinner table), jock and bland nice guy love interest for our heroine.

Sure, most of these people are just fodder (and not a one of them can act), but did they really have to make them so irritating? ... Or so stupid? Despite the frequency of strange occurrences in the home, including windows busting out on their own, strange gusts of wind that seem to come from nowhere, tarot card readings that spell their doom, bloody nightmares and frequent sightings of the ghostly little girl, these dunderheads don't even really contemplate leaving. They stay there until they're killed. Or as Gloria puts it "What the fuck kind of vacation is this?"

The film contains numerous horror references, including direct nods to Psycho, The Exorcist, "The Addams Family," "The Twilight Zone" and Stephen King. Not only that, but it blatantly borrows ideas from numerous other films. The girl ghost dressed in a white nightgown is clearly swiped from Bava's Kill, Baby... Kill! (1966), right down to her rolling a ball at people she wants to "play" with. Climactic scenes utilize fire and shattering glass in a way that brings to mind Argento's Inferno (1980), and scenes inside a run-down old building steal ideas (and sometimes even identical camera shots) from several then-recent genre hits, including NIGHT OF THE DEMONS (1987) and A Nightmare on Elm Street 3 (1987).

Our two name stars - Bannen (a frequent presence in British horror of the 70s) and Lund (a former TV star who tried to reinvent herself as a Scream Queen in the late 80s) seem to be enjoying themselves, though their big confrontation at the end, with each of them trying to shout religious diatribes over one another while a shrill little girl shrieks over and over again, is annoying to put it mildly. Regardless, both actors are clearly the only two pros in this particular cast and are definite assets to the film. Thankfully, it also has some nicely-done visual effects (especially toward the end), very stylized lighting choices, excellent art direction and enough blood (fx are by Rick Gonzales) to keep one reasonably entertained.

The version I saw (unfortunately an extremely dark print) was taken from the Japanese VHS.