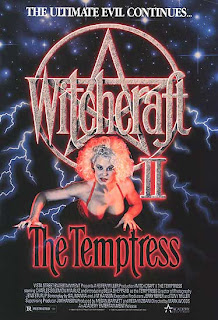 ...aka: Witchcraft Part II: The Temptress

Directed by:
Mark Woods
William (Charles Solomon), the now-teenaged baby from the original WITCHCRAFT (1988), is living peacefully in the suburbs with a new family, about to go away to college and is completely oblivious to the fact that the couple who raised him aren't actually his birth parents. In fact, his father (Jay Richardson) and mother (Cheryl Janecky) swiped him while he was still an infact after his mother commited suicide. As William plans for the future and tries to get into his virginal girlfriend Michelle's (Mia Ruiz) pants, a force of evil materializes right next door in the shape of a big-breasted, bleach-blonde seductress. She - Dolores Jones (Delia Sheppard) - knows all about William's lineage, leaves him strange gifts and wants his "seed" while he's still pure so she can bear the child of Satan. And she'll go to great lengths to get it, including trying to seduce William by cleaning out her gutters in broad daylight while wearing only a mesh body suit and thong. She also has no issue with killing anyone who gets in her way and can take the shape of whoever she wants whenever she wants to accomplish her goal. Now that I think about it, if I were Dolores, I'd probably just 86 the girlfriend, take on her appearance and then do the deed with Will, but then I guess we wouldn't have a movie.
.
While the original came off like a tame and poorly done rip-off of ROSEMARY'S BABY, this first sequel has a slightly more original storyline and is much more typical of late 80s/early 90s direct-to-video product. There's more exploitation, including topless scenes from the two lead actresses and a bit more blood, and posters for Guns N' Roses, The Bangles and Madonna can be seen on bedroom walls. The first half is cheesy but tolerable, but it isn't long before things start getting senseless and messy. Real messy. And the movie never seems to recover. In fact, the big finale (stylized like a tacky 80s music video) is a complete laugh riot. During one sequence, Michelle is molested by an invisible force and for some reason, both she and William suddenly have huge pentagrams carved into their chests.
.
Though not utilized to her full potential here, the temptress of the title, Delia Sheppard, would emerge as one of the brightest talents on the B-movie scene in the early 90s with such films as HAUNTING FEAR (1989), MIRROR IMAGES (1992) and, one of my personal favorites, SINS OF DESIRE (1992). Aside from those, she's had a very interesting, and very full, show business career. Born in Copenhagen, Denmark, Sheppard was performing ballet professionally at age 9 (for the Royal Danish Ballet) and later worked as a fashion/runway model in Paris (including assignments for Dior and Gautier). After arriving in America, she became a 1988 Penthouse Pet, which led to a career in both big- (ROCKY V, THE DOORS) and low- (DEAD BOYZ CAN'T FLY, this) budget films. Afterward, she took a break from acting, went to Las Vegas to dance and perform in stage productions, which landed her "Showgirl of the Year" honors and other awards. Now she's back to film acting again and can be seen in films such as VAMPIRE IN VEGAS (2008) and VOLCANIC (2009).
.
Richardson would also carve out a niche for himself, appearing in around 100 low-budget films, including many for directors Fred Olen Ray and Jim Wynorski. Solomon would reprise his role as Will in the next two sequels: WITCHCRAFT III: THE KISS OF DEATH (1991) and WITCHCRAFT IV: VIRGIN HEART (1992). Mary Shelley gets to briefly reprise her role as the witch Elizabeth in the opening sequence. David L. Homb (Andy Milligan's MONSTROSITY, CAMP FEAR and others) and Kirsten Wagner (TERRORGRAM) play William's friends.
.
★1/2
Posted by The Bloody Pit of Horror at 2:38 AM