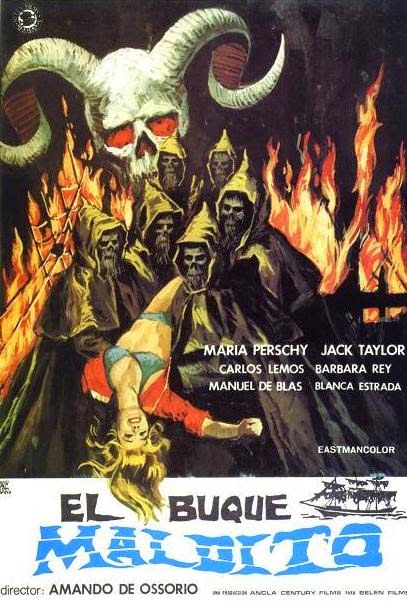 
El buque maldito (best known here in America as either The Ghost Galleon or Horror of the Zombies), third entry in de Ossorio's Spanish Blind Dead series, following up TOMBS OF THE BLIND DEAD (1972) and RETURN OF THE EVIL DEAD (1973) and followed by NIGHT OF THE SEAGULLS (1975), features the novelty of the skeletal Knights Templar at sea. It's an interesting concept, but sadly this film fails to make much of it. As part of a publicity stunt, a modeling agency puts bikini-clad models Kathy (Blanca Estrada) and Lorena (Margarita Moreno) in a boat way out at sea hoping they'll be rescued by a passing ship and make front page news. Unfortunately, both girls become lost in a thick blanket of fog, run across a large ghost ship and disappear immediately after boarding; first getting word out (via radio) what's going on.

Fearing the bad press headed their way if they don't locate the girls and bring them back safely, photographer Lillian Perry (Maria Perschy), agency head honcho Howard Tucker (Jack Taylor) and his sadistic assistant Sergio (Manuel de Blas), who all spearheaded this odd campaign, decide to take Howard's yacht out on the sea to find them. Also going along are Professor Gruber (Carlos Lemos), who is schooled on the Phantom Ship legend and wants to see if there's any truth to it, and blonde Noemi (Barbara Rey), who lets everyone know there will be hell to pay if her roommate and best friend (Kathy) isn't found. At nightfall, the five enter into the mist (which is actually another dimension altogether and is invisible to radar), run into the galleon, board the boat and begin looking around. Their boat disappears and instead of finding Kathy and Lorena, they find a bunch of large chests, which are the coffin-like resting places of the hooded, skeleton-faced Knights Templar zombies. They rise from their slumber every once in awhile to spill some blood for Satan and are scared of fire and crucifixes. We also discover there's a hidden treasure on board the boat, but this revelation almost seems like an afterthought thrown in at the end to ensure the death of one of the characters.


The cult reputation of this series, as far as I can tell, seems to rest mainly on the fact they have cool-looking zombies. They're definitely the highlight of this movie; creepy and menacing looking as they rise up from their tombs, slowly shuffle toward their victims and reach out their bony hands at them. Raúl Artigot's cinematography and Antón García Abril's score are also worth praising and help to make it all fairly atmospheric. Unfortunately, the rest of the movie is pretty much a boring mess. My biggest problem with Ghost Galleon is that is lurches along with the same exact momentum as the featured shambling undead. The pace is deadening slow throughout... The annoying, thoroughly unlikable characters bitch, walk, stand around with their mouths gaped open for minutes at a time anytime anything weird happens and sleep (you might feel tempted to do the same). And when the ghouls corner a victim, if you're expecting a nice bloody killing to commence, then you're just shit out of luck with this one. Almost all of the mayhem takes place off-screen, aside from one dismemberment murder which we only see about three quick flashes of (and this scene itself has been cut out of some of the video prints). I still have no idea why it's rated R. The dubbing and dialogue are both bad bad bad, not that I expected otherwise.


The Blue Underground DVD comes with a few extras (namely a poster and still gallery, a couple of trailers, a TV spot and radio spots). They also released a box set with all four Blind Dead titles.