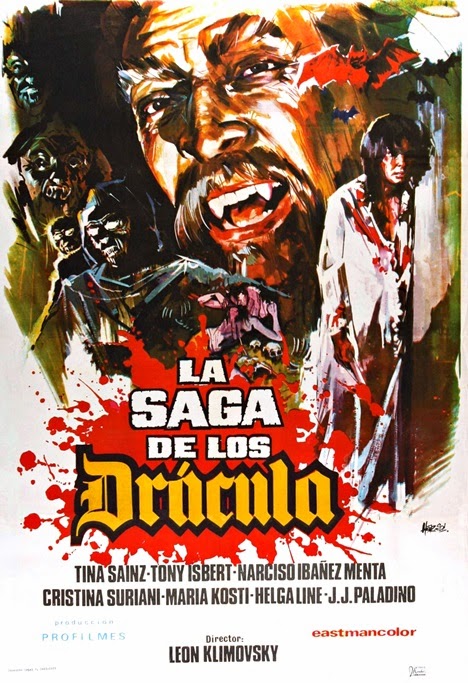 
Berta (Tina Sáinz), a descendant of the Vlad Tepes (aka Dracula) clan, hasn't been back to her birthplace, a tiny Transylvanian village, since she was a child. Now living in London, married to Hans (Tony Isbert) and in the early stages of pregnancy, Berta receives a telegram from her some estranged relatives asking her to pay them a visit. Berta complies, but once she and her husband arrive in the village, she soon starts regretting they've ever come there. Their coachman refuses to take them to the castle so they're forced to walk by foot. On the way there they discover a topless woman lying in forest with puncture wounds on her neck and breast. They take her to a local inn/tavern where the superstitious townspeople write off the attack (and other similar recent attacks of young women in the area) to a pack of wolves but seem to live in fear about Castle Dracula and its inhabitants.

The next day, Dracula family "administrator" Gabor (J.J. Paladino) meets Berta and Hans at the inn and offers to take them to the castle. Once they arrive they can't locate anyone... but do find inscribed grave markers for each of the family members. He serves them a meal of raw meat and suspiciously thick and foul tasting wine to wash it down with while they wait for the family, who won't be arriving there until later that evening. Grandpa, the aged Count Dracula (Narciso Ibáñez Menta) shows up to reveal that he's remarried a sexy and much-younger young woman named Munia (Helga Liné). Berta's two cousins and childhood playmates; Xenia (María Kosty) and Irina (Cristina Suriani) are still around, too. Everyone seems overjoyed that Berta is pregnant and have a toast that evening to "The future Count Dracula." Though the Count tells his granddaughter they suffer from a genetic disease, it isn't long before the entire family are revealed to be vampires and they want Berta's baby to carry on the family bloodline.

I must say that I was very pleasantly surprised with this one. Despite the fact it's not difficult to find (a DVD was just released last year) this has a measly 67 votes on IMDb and a ho-hum 4.8 rating. While it starts like your usual Gothic horror yarn with all the usual trappings, it eventually charts it own course and becomes sort of like a vampire version of ROSEMARY'S BABY (1968) with the blood sucking family holding the pregnant, innocent descendant prisoner in their castle. The woman's useless husband cheats on her with the sexy mistress of the castle and then passes on the vampire gene to the woman's unborn baby after they have sex. The baby then starts feeding internally off the mother, turning her sickly, anemic and eventually batshit crazy. Throw in a one-eyed, web-fingered melty-faced monstrous child kept hidden in the attic, two bizarrely-filmed nightmare sequences (one where our heroine is being chased through a building by a bat-faced monster and another where she leans in to kiss her grandmother and her head falls off!) and a bloody axe rampage at the finale where heads and limbs are hacked off right and left and you have this bizarre Spanish gem.

It's blackly humorous, the cast is great (especially Menta as the bearded, weathered Dracula, who is perfect in his part) and it's even surprisingly creepy at times. The special effects are decent (with vampires given an effectively otherworldly slight green tint at times), the film has a nice misty soft-focus look and the score is excellent. Gothic/ vampire horror fans get what they want (old castles, foggy forests, dark dungeons...) and exploitation fans get what they want (gore, sex and a hilarious scene where the the two vampire cousins strip off in front of a rabbi in the woods and kill him) and everyone is happy. The cast also includes "Henry Gregor"/ Heinrich Starhemberg (the son of Austrian prince Ernst Ruediger von Starhemberg) as a crippled doctor, Betsabé Ruiz as a vampire victim, Luis Ciges and Elsa Zabala.

Klimovsky is best known for his numerous pairings with Spanish horror legend Paul Naschy and holds the distinction of directing the actor more times than anyone else (if you exclude the times Naschy directed himself). The Naschy / Klimovsky collaborations include THE WEREWOLF VS. THE VAMPIRE WOMAN (1971), Dr. Jekyll and the Werewolf (1971), VENGEANCE OF THE ZOMBIES (1972), Devil's Possessed (1974), A Dragonfly for Each Corpse (1974), DEATH OF A HOODLUM (1975), Kidnapped (1976) and The People Who Own the Dark (1976). Other Klimovsky horror efforts that don't feature Naschy include Edge of Fear (1964), VAMPIRE'S NIGHT ORGY (1973), I HATE MY BODY (1974), NIGHT OF THE WALKING DEAD (1975) and Trauma (1978). If you ask me, his work is much more interesting than he's ever been credited for.

The 2008 Deimos DVD (which has been remastered from the original negative and looks great) gives you the option of watching the film dubbed (which is actually surprisingly well done) or in its original language with optional English subtitles. The disc also includes the trailer, an altered credits sequence and alternate "clothed" scenes used for more bashful markets to replace the nudity.

I saw this movie years ago on a local Spanish language TV station and was never quite sure what it was. Now I know! I'm definately checking out the DVD!