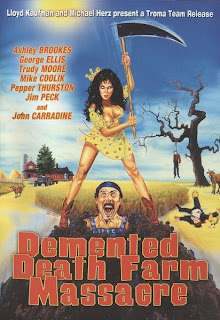 ...aka: Death Farm
...aka: Hillbilly Hooker
...aka: Honey Britches
...aka: Honey Pie
...aka: Little Whorehouse on the Prairie
...aka: Shantytown Honeymoon
Directed by:
Donn Davison
Fred Olen Ray
Fred Olen Ray purchased the rights to a low-budget 1971 hicksploitation flick originally released as SHANTYTOWN HONEYMOON (aka HONEY BRITCHES and several other titles), added a few minutes of new footage featuring John Carradine as "The Judge of Hell," changed part of the music score and then sold it to Troma, who did their usual re-packaging/re-title job to give it some camp appeal. Back in the 70s, the film was re-released numerous times under a variety of different titles, including HILLBILLY HOOKER and LITTLE WHOREHOUSE ON THE PRAIRIE. The director of the original film was Kentucky-born Donn Davison (aka Phil Chandler), who had worked as a spook show magician, managed the Dragon Art Theater adult cinema in California, did voice over work and trailer narration, served some time behind bars for obscenity charges back in the mid-70s and was apparently a national yo-yo champion and spokesperson for Duncan Yo-Yo's!
In addition to this film, Davison (who passed away in 1999) had also directed a 1968 redneck drama titled MOONSHINER'S WOMAN (often mistaken for another alternate title for this when it's an entirely different film) and added his own footage to several other features, including THE LEGEND OF BLOOD MOUNTAIN (which was filmed in 1965 and re-released with Davison's newly-added footage as BLOOD BEAST OF MONSTER MOUNTAIN in the mid-70s) and SHE-FREAK (filmed in 1967 and re-released with new scenes as ASYLUM OF THE INSANE). Though it probably sounds like this will be a complete mess, surprisingly enough it isn't in that bad of shape. The footage with a depressingly frail and sometimes incoherent Carradine only amounts to a couple of minutes and has him (in the best later-day Lugosi tradition) babbling a bunch of nonsense that has nothing to do with the movie. It's badly spliced in and utterly pointless, but the original feature, while dumb as can be, is pretty fun at times.
A couple of thieves rob a jewelry store, make off with over a million dollars in rare jewels, steal a helicopter, crash it and then steal a jeep. This being a super low-budget regional film, none of that is actually visualized for us. It's simply described during a car radio broadcast (voiced by Davison himself) right before the bluegrass staple "Roll In My Sweet Baby's Arms" comes on. The two thieves; British-accented Philip Courtley (Jim Peck) and his younger accomplice Kirk Taylor (Mike Coolik), along with their girlfriends; Amazonian, big-breasted, chain-smoking bitch Suzanne (Trudy Moore) and meek, abused Karen (Valerie Lipsey), run out of gas while heading down to Florida to sell the stolen diamonds. Stuck in the backwoods of North Carolina, the quartet push their jeep off to the side of the road and then head into the woods looking for some place to hide out until they can get some gas.
After walking through the woods for what seems like an eternity, the quartet run into young and naive country bumpkin Reba Sue (Ashley Moore), whose father "sold" her to an old, bearded, pudgy moonshiner named Harlan Cravens (George Ellis) to clear up a 200 dollar debt. Harlan is a not only a loud slob, but he's also a paranoid, woman-hating religious nut who thinks every woman is a whore and won't consumate his relationship with his shapely new wife. No problem, Kirk's game. After the two of them get it on, Karen and Reba Sue get into a catfight that ends in death as one of the ladies gets her head bashed in with a moonshine jug. From here on out it's a free for all with characters chasing each other around the house and through the woods trying to kill one another. There's a pitchfork-through-the-neck and someone gets mowed over by a pick-up truck.
While this doesn't quite cut it as a horror film (despite the "spooky" new footage/ music and a couple of gory moments) and doesn't quite cut it as sexploitation (there's just one sex scene with only partial nudity), it does work OK as a redneck movie. The accents are hilarious and the characters; especially Harlan and Suzanne, are entertaining enough to keep you watching. The cast also includes Pepper Thurston as a black whorehouse madam named Jessie-Belle (uh, get it?) and R. Kenneth Wade as Harlan's semi-retarded hired hand Tobey.
If you're interested in seeing the original film minus the Ray-shot scenes, Something Weird offers it on VHS and DVD-R.
★★
Posted by The Bloody Pit of Horror at 6:51 PM

Davison was really involved in a lot of schlok! The Legend of Blood Mountain is a movie I'll never forget (although I've tried!). I think I have a VHS of this lying around here under one of the other names!

I wouldn't mind seeing it. I kind of liked this one. Wonder if I should be embarrassed admitting that? lol