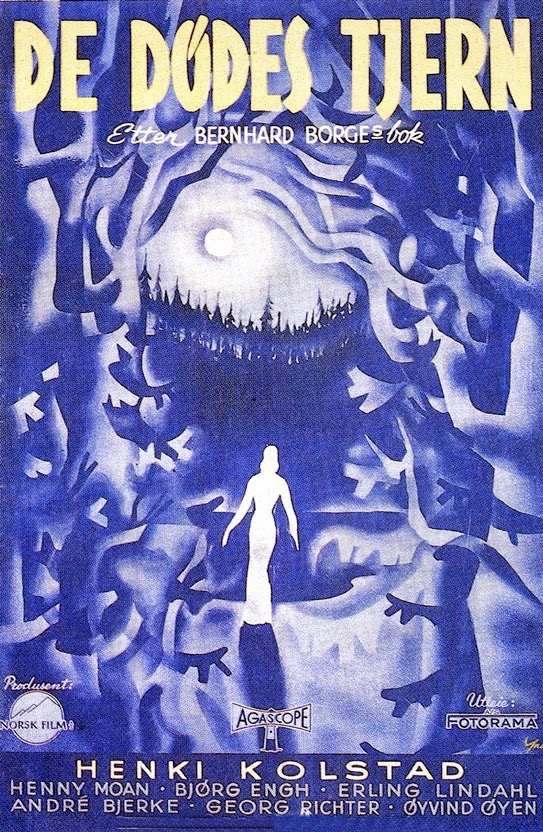 
Norway hasn't produced many horror films over the years. A few cross-over hits, such as Dark Woods (2003), Next Door (2005), Dead Snow (2009), its 2014 sequel Dead Snow 2: Red vs. Dead and the Cold Prey (2006-2010) series have come out here semi-recently, but before that their genre output was nearly nonexistent. As a matter of fact, a Norwegian horror keyword search over on IMDb only brings back three titles made before 1990. Lake of the Dead (also released as The Lake of the Damned) is one of these. In fact, it's the earliest Norwegian horror film listed and may actually be the very first horror film produced in that country. While fairly well regarded on its home turf, the film isn't very well known here in the States at all, but it really should be. Lake is a very well-made, intelligently-written and stunningly photographed mystery that keeps you guessing and makes unnerving use of its picturesque outdoor locations. One hopes the 2012 DVD release from Sinister Cinema - the first time the film has been available with English subtitles to my knowledge - will finally get the film some much overdue attention.

After a brief prologue, mystery novelist Bernhard Borge (Henki Kolstad), his wife Sonja (Bjørg Engh), critic Gabriel Mørk (André Bjerke, who also wrote the novel this is based on), psychologist Kai Bugge (Erling Lindahl), painter Lillian Werner (Henny Moan) and Lillian's fiance Harald Gran (Georg Richter) all decide to take a train trip across country to visit Lillian's hermit brother Bjørn (Per Lillo-Stenberg) at his secluded woodsy cabin. When they arrive, Bjørn is nowhere to be found. Lillian, who seems to have an extrasensory link to her sibling, feels anxious and senses danger. Local legend has it that a hundred years earlier Tore Gråvik, a peg-legged madman with an incestuous bent, took an axe to his own sister and her lover before drowning himself in a nearby lake. The lake is now rumored to be cursed by Gråvik's spirit. Upon the discovery of Bjørn's diary, it's revealed that Bjørn was either being haunted by Gråvik's ghost or has simply lost his mind.


The characters speculate about what's actually going on and what became of Bjørn; some favoring the rational, others leaning toward the supernatural. As one character reads a passage from Bjørn's diary, another character envisions the events, which are chillingly done with some odd stop-motion work of a bird perched on the rooftop and a faint phantom rising from the lake and chasing Bjorn through the woods back to his cabin. Various complications arise in the story (Lillian is caught sleepwalking, a member of their group is eventually found murdered...), but it's best not to give away too much here because it's as much a story-driven piece as it is a visual one.


Excessive talk might turn off certain viewers, but the dialogue is well-written and the character interactions and relationships are interesting. From a visual standpoint, it's often breathtaking. The sense of complete isolation in the forest is effectively eerily and the lake itself, dotted with lily pads and often shot glimmering in the moonlight, begins to take on an ominous feeling after awhile. In some ways I was reminded of Peter Weir's Picnic at Hanging Rock (1975), which also contrasts the beauty in nature to more sinister goings-on. Unlike Picnic, though, we eventually do get an explanation to what's going on.

Director Bergstrom also made a second horror feature; the elusive anthology Klokker i måneskinn (1964), which has never been released in the U.S.

It could be considered the first camping horror movie 20 years before Friday the 13th?

It can be considered the first horror movie about camping much before Friday the 13th? People in internet say F13 is the 'mother' of camping films, but I can't believe that idea can't exist until 1980.

Can this movie be considered the first about camping horror films much before Friday the 13th. People write F13 is the mother of them but I can't believe nobody had the idea until 1980. Thanks!

Friday the 13th is definitely not the first horror movie to feature camping. If one considers camping just staying in cabins or homes in the woods, then there are numerous movies made before Friday one could consider. Mario Bava's Bay of Blood (from 1971) pretty much erases the notion that Friday was first at anything, really. :)

Thanks. I know the idea of bring some people to an isolated place to be killed one by one is not new since Agatha Christie's 'And there were none' novel of 1939, and perhaps she was ispired by the film 'Panthom of Crestwood' of 1932, but it seems difficult to find films about it before the 1970s, or perhaps the reason is I haven´t seen enough movies! There were films where horrible things happened in summer places -Leave Her to Heaven, 1945, Cape Fear, last film part, 1962- but more specific films seem hard to find.