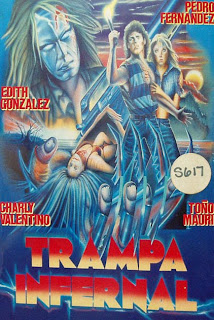 
Mexi imitation of American slashers comes complete with the usual ugly 80s aesthetic (we're talkin' neon, mullets and stone-washed here) and derivations from a whole host of then-popular genre films. Nacho (Pedro Fernández) seems to best Mauricio (Toño Mauri) at everything, with the former usually coming out on top. Their friends are getting sick of the rivalry, so Mauricio comes up with the ultimate final challenge to determine who's the best; a hunting/camping trip in search of an elusive, vicious bear that has apparently just massacred five men. Also deciding to come along are Nacho's girlfriend Alejandra (Edith González) and best friend Charly (Charly Valentino = fat guy = comic relief), as well as Mauricio's friend Javier (Armando Galvan), and their girlfriends Carlota (Marisol Santacruz) and Viviana (Adriana Vega). Scoffing at warnings from a local (Alfredo Gutiérrez), the gang sets up camp near a lake and instead of running into a four-legged fiend, they end up running into a two-legged one named Jesse (Alberto Mejia Baron), a deranged American Vietnam vet who hunts them down one by one.

Things go down basically as you expect them to, with the main characters setting up a brainless scenario just so the lesser characters can behave like idiots and get killed off. Still, this is a fairly efficient example of its type that takes place primarily outdoors in broad daylight and is certainly no worse than the majority of films it copies. In fact, the 77 minute run time is actually an asset, as this cuts right to the action with little filler. One of the best things it has going for it is the presentation of the killer; one of those wacko survivalist types in an expressionless white mask and curly blonde wig (!) who sets up various booby traps and is armed with both a machine gun and a razor clawed glove with perforated blades! Other than the Elm Street Freddy glove swipe, you'll see ideas pinched from FRIDAY THE 13TH (campers getting killed by a masked maniac), THE ZERO BOYS (woodsy war games), THE PROWLER (war vet killer), THE FINAL TERROR (survivalist slasher setup) and many others.

The film (finally available with English subs) was part of the 2007 BCI/Eclipse box set Crypt of Terror - Horror from South of the Border, Volume 1, which also contains CEMETERY OF TERROR (1985), THE DEMON RAT (1991), DON'T PANIC (1989), VACATIONS OF TERROR (1989) and VACATIONS OF TERROR 2 (1991; from this same director). Looking forward to watching the rest of those.