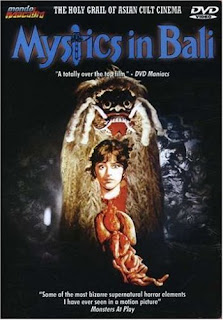 ...aka: Balinese Magic
...aka: Mistik
...aka: Mystics in Bali
Directed by:
H. Tjut Djalil
American journalist Catherine Keane (Ilona Agathe Bastian) is researching a book, which leads her to Indonesia; supposedly the home of the world's most powerful form of black magic - Leak. She hooks up with a friendly man named Hendra (Yos Santo), who knows all about local customs, and takes her deep into the jungle to meet an old sorceress (Sofia W.D.) rumored to possess magical powers. The witch - who can change into a sexier younger version (played by Debbie Cinthia Dewi) if need be - agrees to take Cathy as her pupil if she'll bring her fresh blood to drink. But instead of teaching her the Leak ways, the witch is actually tricking naive young Cathy into helping her regain her youth by terrorizing and drinking the blood of villagers. And that of course involves Cathy's head sometimes popping right off her shoulders (complete with an attached spine and internal organs!), flying around town and sucking unborn fetuses out directly from the womb!
.
A cult following is basically assured thanks to atrocious acting (the extremely wooden lead actress was in fact not an actress at all, but a German tourist visiting Bali who was plucked out of a crowd by the producers), ridiculous dubbing and dialogue (the witch's non-stop cackling sounds like it would be more at home coming out of a Muppet's mouth), the bizarre premise and lots of strange, cheesy special effects. The witch has a long flexible tongue she uses to slurp blood from bottles and at one point she and Cathy even transform into bloated pig people.
.
W.D. Mochtar (BLACK MAGIC) co-stars. The director also made THE WHITE CROCODILE (1982), SATAN'S BED (1983), LADY TERMINATOR (1985) and others. The Mondo Macabro DVD release is a fairly nice print (and clearly the best one available), though every time the head comes off it seems to have been sourced from a VHS source. Still, the disc itself comes with an outstanding and well-researched documentary on Indonesian exploitation films that makes the film well worth purchasing.
★★
Posted by The Bloody Pit of Horror at 11:21 PM

I think you might be selling this film a bit short here :)

Yes, the acting is atrocious, as is the English dubbing. Still, I think it's one of these bad horror movies that are actually based on a workable idea. A slightly naive American journalist trying to learn more of magic by becoming an apprentice to a witch and ending having bitten more than she could chew? One could make an interesting movie with this premise.

Also, the film is notable, because it features a rare portrayal of a penanggalan - Asian vampire variant in the form of a flying female head. Penanggalan is a wonderful folkloric creature and it's great to see one in a movie!

Finally, there *are* good moments in this movie. The transformation sequences, while cheap, are kind of creepy - especially the pig transfomations. Seriously, female were-pigs, walking on two legs, with their human breasts flagging around? This is a scene that could find a home in a much better movie. It's just... surreal and pleasantly unsettling...

Been awhile since I saw this but I own the DVD and need to eventually stick up a longer review with pictures anyway so I'll definitely be giving this another look. I've seen a lot of other Asian horrors since viewing this and gained an appreciation for them over the years so I may be more receptive next time I watch this one. :)