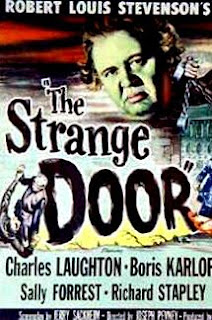 Directed by:
Joseph Pevney
Based on the Robert Louis Stevenson story "The Sire de Maletroit's Door," this dark, set-bound period melodrama seems like an attempt by Universal to reboot the line of gothic horror films they used to specialize in, which had gone out of vogue in the mid-1940s. This didn't accomplish that much during its day - audiences seemed more interested in atomic age sci-fi/horror at the time - but it remains a pretty fun watch thanks primarily to the deliciously over-the-top performance of Charles Laughton. Fleeing after a bar room brawl leaves a man dead, Denis de Beaulieu (Richard "Stapley"/ Wyler), a bad egg descendant of noblemen, ends up at taking refuge in the castle home of Alain de Maletroit (Mr. Laughton). The sanctuary soon turns into an uncomfortable situation as Denis finds himself at the mercy of the gluttonous, vengeance-mad Frenchman, who keeps him there against his will and tries to force him to marry his niece Blanche (Sally Forrest). Years earlier, Alain's brother Edmond (Paul Cavanagh) stole away the woman he loved and now, you see, he wants revenge by ruining Blanche's life.
.
Second-billed Boris Karloff has a disappointingly small role as manservant Voltan, who works for Alain but has secretly sworn allegiance to Edmond, who's being kept prison in the castle's dungeon away from a daughter who assumes he's dead. Though it drags a bit in the middle and offers few surprises, the film has an intriguing opening sequence and a lively finale to keep you watching. Well-acted by all (including Michael Pate and Alan Napier in supporting roles), though the entire film is pretty much dominated by Laughton whenever he's on screen. The sets and production design are both good and the cinematography's decent; though the score is comprised entirely of familiar stock music.
.
A nice-looking print of the film is available on the Universal release "The Boris Karloff Collection;" a welcome box set that also includes NIGHT KEY (1937), TOWER OF LONDON (1939), THE CLIMAX (1944) and THE BLACK CASTLE (1952; which also features Karloff in a smaller role).
.
★★1/2
Posted by The Bloody Pit of Horror at 4:58 PM