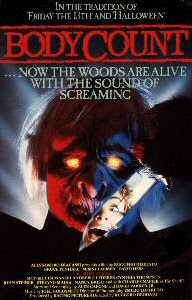 ...aka: Body Count
...aka: Bodycount
...aka: Camping della morte
...aka: Camping Ground
Directed by:
Ruggero Deodato
Italian-made imitation of FRIDAY THE 13TH et al has a few familiar faces in the cast and an excellent shooting location but is too predictable (and poorly made) to be of much interest to anyone other than very forgiving slasher enthusiasts. A little boy named Ben witnesses a young couple getting killed by an Indian shaman. Fifteen years later, a bunch of young folks arrive at the same location (rumored to have been built upon an Indian burial ground) to camp, fish, ride motorcycles, hike and generally goof off. They're greeted with hostility by camp owner Robert Ritchie (David Hess, star of the director's HOUSE ON THE EDGE OF THE PARK), whose wife Julia (Mimsy Farmer) is having an affair with the local fuzz, Sheriff Charlie Barnes (Charles Napier). A now grown Ben (Nicola Farron), the son of Robert and Julia, also comes back for a visit. As expected, the Indian killer - who is either a human in disguise or a supernatural entity - begins killing everyone off one by one.
One could easily pick at the recycled premise, terrible dialogue or bad acting, but all that is pretty much expected of an 80s slasher flick. This one still fails because the usual irritations are coupled with unimaginative and weak murders, horrendous editing and bad lighting. What the hell is the point of one of these things if you can't even make the kills out clearly? Futhermore, what's the point of one of these things when you actually can see the kills and all you get is yet another dull knife stabbing? It's not scary, suspenseful or tense. It's not gory. And it's not even unintentionally funny. Just really bland. I also would have appreciated being able to tell what happened when our hero (Bruce Penhall) and heroine (Luisa Maneri) faced off against the killer toward the end but alas it was so damn dark and badly edited I couldn't tell what the hell was going on.
All of the problems are a true shame too, because this has the foundation of a decent enough film, starting with Claudio Simonetti's very 80s (and very great!) theme music over the opening credits. The outdoor setting itself (in Abruzzo, Italy), with its nice fall colors and mountainous backdrops, is an excellent location for one of these things. There are some horror vets in the cast, too. Aside from those mentioned, John Steiner (as a doctor) and Ivan Rassimov (as a deputy) show up in small roles, and 'B' fans may even recognize some of the lesser-knowns, such as Nancy Brilli (DEMONS 2), Cynthia Thompson (CAVEGIRL) and Valentina Forte (CUT AND RUN). Unfortunately, the pluses aren't nearly enough to overcome the negligent direction and ineptitude constantly on display here. Every single FRIDAY THE 13TH film released during the 1980s is better than this.
★1/2
Posted by The Bloody Pit of Horror at 1:10 AM