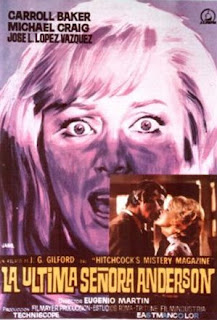 Watchable, though tame, bland and ultimately forgettable, little Italian/ Spanish mystery, or "giallo" if you prefer, from the director of HORROR EXPRESS (1972) and IT HAPPENED AT NIGHTMARE INN (1973). Handsome, reclusive, middle-aged British playboy Arthur Anderson (Michael Craig) is having a hard time keeping a wife. In fact, he's lost no less than three in recent years, all in tragic "accidents." His first wife died in a car crash ("faulty breaks"), his second fell to her death at a construction site and his most recent wife, Gladys, is found floating face up in the swimming pool as the film opens. A later autopsy on wife #3 reveals that she was loaded down with a fatal dose of barbituates before taking her fatal swim. The fact Arthur has collected over 160 thousand pounds of insurance money on his three former wives raises suspicions, so he's brought to trial for murder. Thanks to lack of evidence and testimony from Arthur's faithful maid Felicity Downing (Miranda Campa), that sheds light on Gladys' drug addiction and suicidal tendencies, Arthur is acquitted of all charges. Inspector Dunphy (José Luis López Vázquez) of Scotland Yard isn't so convinced and decides to investigate.
.
The same night he returns home from the trial, Arthur finds his curiously friendly and aggressive neighbor Julie Spencer (Carroll Baker), who he's never met before this evening, taking a dip in his pool. He shoos her off, but the two eventually find themselves drawn to one another, become romantically involved and go through with a quickie marriage ceremony. Is this going to spell death for the fourth Mrs. Anderson? And what gives with the bizarre woman in sunglasses and a black cape (played by Marina Malfatti) who's been lurking around outside? I could easily reveal the obvious false identity of Baker's character, what she's really up to and the third reel twists, because you've probably already seen all of them before, but I won't go into too much detail because that would spoil whatever pleasures the film has to offer, minor as they may be.
.
Silly, though competently done, this film takes over an hour to generate much interest and even then it doesn't offer up too much in the way of mystery or excitement. The score isn't bad, though, and the cast acquit themselves fairly well. Baker had been a major Hollywood star after her Oscar nominated turn in the controversial BABY DOLL (1956), but her career took a nosedive after the failure of the biopic HARLOW (1965), so she ended up in Europe in the late 60s and early 70s starring in giallo thrillers, some of which were X-rated at the time of release but are mild by today's standards. Other titles starring her include PARANOIA (1968), THE SWEET BODY OF DEBORAH (1968), A QUIET PLACE TO KILL (1969), SO SWEET... SO PERVERSE (1969), the deadly dull KNIFE OF ICE (1972) and others. Though Baker does well enough here, the biggest surprise is Malfatti in what might be her best role in one of these films. She failed to make much of an impression in either lead roles (such as in THE NIGHT EVELYN CAME OUT OF THE GRAVE, a film that was all-but-stolen by Erika Blanc) or supporting ones (in SEVEN BLOOD-STAINED ORCHIDS she was asked to do nothing but disrobe and die), but here she's given the more interesting part and does an effective job playing a psycho.
.
So it's not really worth seeking out unless you're a giallo completist, though it is extremely rare. This film was never released in the U.S. on either video or DVD. In fact, the only country that saw a legit home video release was Greece. About twenty years ago it was released on the Master Home Video label and came in a misleading box that seemed to promise titilation when in fact the film has no nudity and almost no violence to speak of.
★★
Posted by The Bloody Pit of Horror at 6:21 AM

Thanks for the heads up. I still need to do screen caps for this one. Maybe give it another look, too.