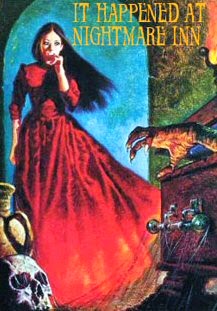 
British photographer Laura Barkley (Judy Geeson) arrives in a small Spanish village for a museum assignment and plans to meet her sister May (Loreta Tovar) at a small local inn. However, her sister is nowhere to be found and the stuffy, religious, outwardly virtuous siblings who run the establishment, Marta (Aurora Bautista) and Veronica (Esperanza Roy), claim she has already left. Skeptical of their story, Laura stays in town to investigate and discovers that the hoteliers are actually psychopathic killers who are disgusted by the lack of morals in today’s youth... particularly the scantily-clad females. Their targets include a sexpot who wears daisy dukes and micro-minis and a young mother who they think conceived her child out of wedlock. The dismembered bodies of victims are kept in a wine vat in the cellar.

This slightly above-average psycho-thriller looks pretty good, has an interesting storyline (with sociopolitical elements) and enough effective grisly moments to make it worth checking out. Director / writer Eugenio Martín (who is best known for the great Horror Express) and co-writer Antonio Fos should also be given some credit for their mature characterizations. Most interestingly, of course, are the psycho-sisters; passive and repressed Veronica dominated by the stern, humorless, hypocritical and occasionally frenzied Marta. Roy and (especially) Bautista make the best of their wicked women. However, the film comes to an irritating, crashing halt with an anti-climactic non-ending. The cast includes such familiar Spanish genre actors as "Vic Winner" (Victor Alcázar), Lone Felming, Blanca Estrada, "Julia Montserrat" (Montserrat Julió), Fernando Hilbeck and Charlie Pineiro.

The version I saw (released from Brentwood) is probably the version that played on TV since the opening murder scene, an entire subplot, some of the violence and all of the nudity have been removed. Apparently as much as 25 minutes (!!!) are missing from this 67-minute cut. Despite that (and the poor quality of the disc), this one somehow remains enjoyable. I'd certainly love to see someone put out an uncut, remastered version one day. The original title translates to A Candle for the Devil (also the British VHS release under the Midnight Video label that is said to be uncut) and it’s also on tape as Nightmare Hotel.

Amazingly, this not-so-well-known film was remade nearly scene-for-scene in Turkey as the hilariously bad BRUTAL STORM (1985).