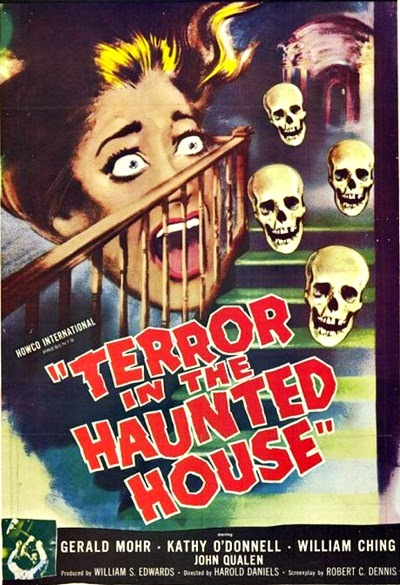 ...aka: My World Dies Screaming


Sheila (Cathy O'Donnell) is haunted by a recurring nightmare about a sinister house ("Death in its most hideous form waits for me at the top of the stairs!") Her psychiatrist Dr. Forel (Barry Bernard) thinks its her subconscious acting out a repressed past trauma, but she's not too convinced of that. Newly married to Philip Justin (Gerald Mohr) after a "whirlwind romance," Sheila's about to travel from Switzerland (where she's lived since a child) to America to start her new life. Once they arrive in Florida, Sheila instantly recognizes their rented vacation home... it's the same one she's been dreaming about! When they try to leave, they discover someone's ripped all of the wires out of their car. Their chief suspect in doing it is elderly caretaker Jonah (John Qualen), who tries to scare Sheila away telling her about the axe-murder-laden history of the home and how its former occupants were referred to as "The Mad Tierney's." So Sheila spots a "hideous, inhuman face" outside her window. And Sheila is chased up the stairs by a mean dog. And Sheila starts suspecting everyone around her (including her new hubby) of foul play. Sheila pouts. Sheila screams. Sheila cries. Sheila faints. Sheila scream some more.


Eventually showing up at the home to shed some light on things is its owner, Mark Snell (William Ching), who helps Sheila fill in the blanks by informing her that her husband is actually the last of the Tierney's and she somehow was connected to the family in her youth. Well, before she went bonkers at the age of seven and was shipped off to Europe. After setting up the premise during the first half and sloppily unveiling the few twists to the storyline before it should, the film really has nowhere else to go and plods along toward a predictable and exposition-heavy conclusion. O'Donnell (fondly remembered by film buffs for her performances in The Best Years of Our Lives and They Live by Night a decade earlier) actually tries to give a performance, but she's stuck playing one of those irritating 50s females who ultimately has little to do other than act on the verge of hysteria throughout and whimper in the corner. The male actors (particularly the lead) are all pretty bad, and the supernatural/haunted house clutch is nothing more than a hoax.


The one and only thing that makes this worth watching is the fact it was shot in "Psycho-Rama;" a "subliminal communication" process which is nothing more than brief flashes of cartoon-like drawning; of a devil sticking his tongue out, a man in glasses with a rat in his mouth, a skull and a cobra (the latter colored red), and message cards (reading... "Get Ready to Scream!," "Prepare to Die!," "Scream Bloody Murder!," etc.), edited into the film in one-frame incriments. So if you plan on watching this make sure you keep your trigger finger on the pause/ foward advance button for maximum enjoyment. Well, it might be your only chance to get any kind of enjoyment out of this one. On some prints, Rhino Video (one of the major distributors of this title) had some fun by "subliminally" sneaking an advertisement in during the last ten minutes! Since use of subliminals was illegal until 1961, the print shown on TV had these inserts removed. The following year director Daniels made Date with Death (1959), which also made use of the same technique.