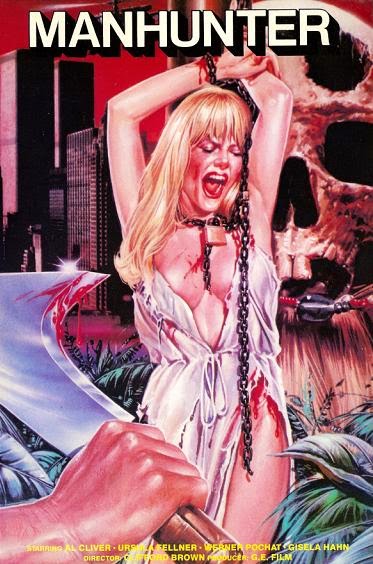 
Blonde Ursula Buchfellner (a German-born 1979 Playboy Playmate) is Laura Crawford, a saucy actress/model who is location scouting somewhere in South America. After meeting with the press and a photo op on the beach, she is kidnapped (right in the middle of a bubble bath) by a bunch of sadistic thugs (Antonio de Cabo, Werner Pochath, Gisela Hahn, etc.) and brought to an island. While she's being held for 6 million dollars in ransom money, she's raped, beaten up and even has her nipple sliced with a machete to show they mean business. Meanwhile, mustachioed Vietnam vet Peter Weston (Al Cliver) is hired by the girl's agent to find her. He and his group fly a helicopter to the island and agree to trade off the girl for the loot. The switch however is botched, gunfire is exchanged and the kidnappers yank Laura back through the jungle, where they're picked off one by one and she's abducted by the local cannibal tribe. The natives eat human hearts and place an especially high value on light skinned sacrifices, so Laura fits the bill nicely. They strip her naked, bathe her in a stream and rub flowers over her nude body to get her ready to meet their ancient cannibal God. The God (usually shown through a hazy POV shot) is a tall, naked cannibal/zombie-type guy with bloodshot ping pong ball eyes. His interests include ripping off human heads, beating in faces with rocks and eating female genitalia. And yes ladies, he's single!

Despite all the rampant nudity and some cheap looking gore, this is tamer and much less disturbing than most of the major Italian cannibal titles because it's technically inept, slow and never seems to be taking place in reality. First off, the "jungle" doesn't look a thing like a tropical South American jungle. In fact this one was filmed near the coastline in both Spain and Portugal. Secondly, the cannibal tribe consists not only of a bunch of black men and women, but also a slew of white guys, some not even sufficiently tan to pass themselves off as natives. The acting's bad, the direction's bad, it's padded out and the dialogue and dubbing are pretty horrendous ("This wild vegetation gives me the creeps!" hisses one of the kidnappers at one point). Perhaps the worst part is the editing. It's one of the worst hack-jobs I've seen. Hard to tell whether that's just how the movie has always been or if it's been re-cut over the years by different distributors. In any case, it's badly done all the way around.

The DVD version from Videoasia seems to be a Japanese print of the film. While there is a sufficient amount of T&A, the hoo-hoos (and briefly, a hee-hee) have been digitally scrambled. Not that it really matters, this thing wouldn't suck any less with the nude scenes intact. Also the DVD has some of the strangest letterboxing known to man, with about 80 percent of the black strip on to bottom of the screen. I'm not going to deduct any points for the bad print. If I did, it would get a "NO STARS!" rating instead. Franco regulars Antonio Mayans and "Victoria Adams" (Muriel Montosse) are also in it.

Ursula Buchfellner was not born in 19179. The filme was made in 1980 so it goes without saying that she could not be 1 year old when she made the movie. I disagree with your comments about the movie. Ursula is gorgeous and her naked scenes are worth watching.

I was mentioning she was a Playboy model in 1979 not that she was born then.

I will give this one another look at some point. I watched a terrible quality print the first time but now a much better one is available.