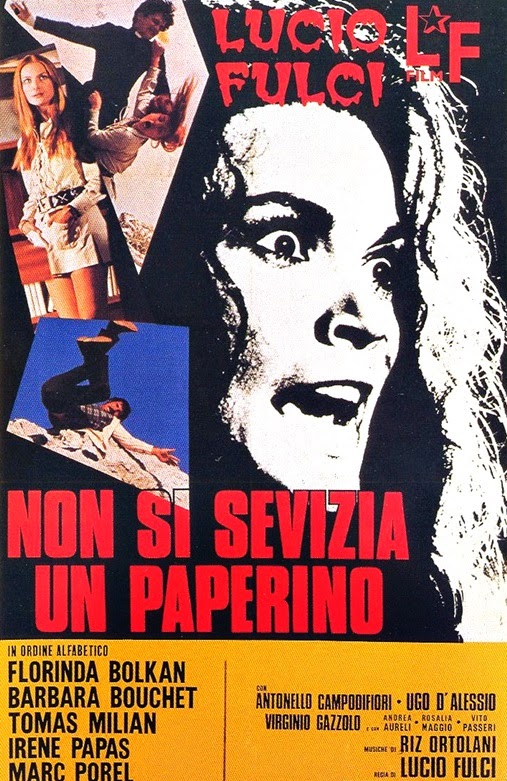 
In a small, picturesque Sicilian village, someone is brutally killing young, sexually curious boys. The local police force keep busy trying to track the killer and whittle the list down to five or so main suspects, including voyeuristic village retard Giuseppe (Vito Passeri) and an elusive, grungy, voodoo doll-poking backwoods "witch" named Maciara (Florinda Bolkan). There’s also Don Alberto (Marc Popel), a handsome young priest who runs the local boy’s school, Andrea (Tomas Milian), a journalist helping to aid the police, and Patrizia (Barbara Bouchet), a gorgeous, but seriously screwed-up drug addict who seems to have a thing for very (and I mean, very) young boys. As typical with the giallo subgenre, the killer's identity won’t be fully revealed until the last few frames. However, unlike the majority of other gialli, this film has a stronger screenplay than usual and doesn't even fully rely on stylish set-pieces, nudity or violence to be a success. The script (which was written by Fulci, Gianfranco Clerici and Roberto Gianviti) keeps red herrings to a minimum and works dually as a statement on Catholic/ religious hypocrisy, pack mentality and the group hysteria it can cause (keep in mind Bouchet's character, as well as the fate of Maciara and why it occurs). The story is ably supported by excellent location work, cinematography (by Sergio D’Offizi) and musical score (by Riz Ortolani). The performances, particularly Bolkan, are also very good. All in all, it's one of the very best of this style of film.

Fulci fans who were weaned on his 80s grotesqueries like Zombi 2 and The New York Ripper will find more artistry and less gore / exploitation on display here than they might anticipate, but they’ll still enjoy a particularly nasty chain whipping scene and a long tumble down a rocky embankment. Scenes of the children being killed is mainly kept off screen (except for a brief strangulation), but the camera doesn’t hesitate to linger on their corpses. Because of the controversial storyline (and no doubt, the religious criticism), the Catholic Church blacklisted the movie back its day and it received only a very limited theatrical release in Europe. It also never reached American theaters and wouldn't even receive a home video release here until twenty-five years after it was made.

this was surprisingly good. didn't think fulci had it in him.

Agreed. This may be the best film he ever made; certainly one of his top genre films. Need to do a proper review of this one sometime!