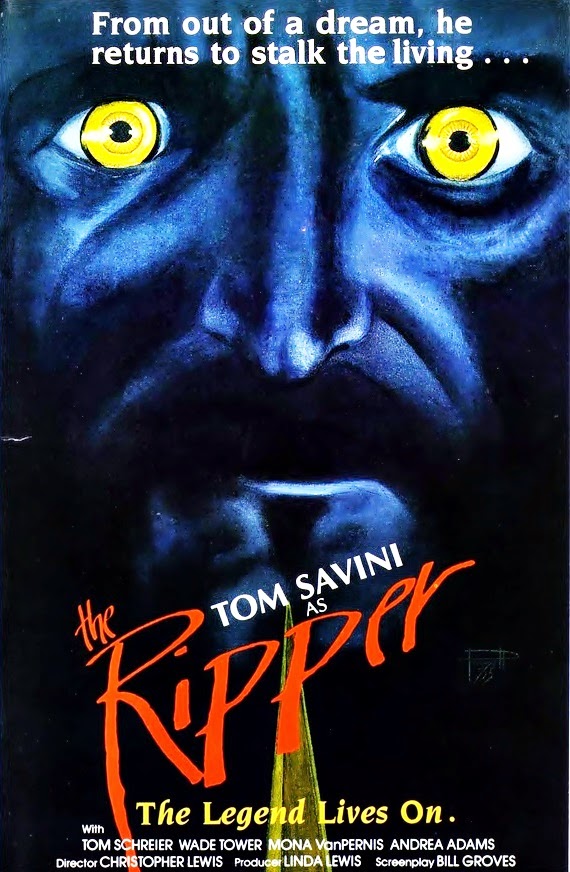 Nice guy college professor Richard (appealing played by Tom Schreier), teaching a course in famous serial killers, becomes possessed when he puts on a ring that once belonged to Jack the Ripper. Soon, he's prowling around dressed in black slaughtering young women. The excellent, gory, detailed effects scenes have the killer slashing the necks of his victims, cutting them open, reaching his hand inside and pulling out bloody globs of internal organs. The professor's understanding girlfriend Carol (Mona Van Pernis) and two of his star students; Cindy (Andrea Adams, from Blood Lake) and Steve (the very irritating Wade Tower) try to help. Guest star Tom Savini shows up at the end for about five minutes as the "real" Jack the Ripper. When the ring is cut off, Tom changes back into the professor, but the cops shoot him anyway! While several other guys are credited with the special effects, they're so good that I kind of wonder if Savini wasn't somehow involved sans credit. This movie is heavily padded and has some bad acting, but the gore, some well written dialogue scenes and Savini's cameo make it a little better than most shot-on-video films from this time period. The people behind this also made Blood Cult (1985) and its sequel Revenge (1986) in the Tulsa, Oklahoma area. The director is the son of actress Loretta Young.