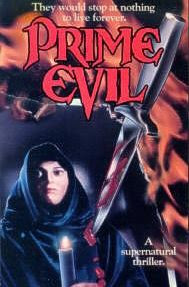 Directed by:
Roberta Findlay
Findlay's most professional-looking horror movie from the 80s (which she also shot and edited) opens with a monk being decapitated, then cuts to present day New York City where a Satanic cult is busy at work. Christine Moore (who also starred in Findlay's LURKERS that same year) is Alexandra Parkman, a virginal social worker whose evil grandfather (Max Jacobs) is planning on using her as chief sacrifice in an occult ceremony that promises immortality to followers of Satan. The cult, disguised as priests and nuns, is led by the seductive Thomas Seaton (William Beckwith), who sends out a fat henchman to kidnap women off the streets to offer up their blood. The women are kept tied up in the church basement in their lingerie (and are often the ones to appear topless). Meanwhile, a defective nun (Mavis Harris) goes undercover in the cult to expose them. The plot is pretty familiar by now, but it's competently made, Beckwith and Moore are pretty good (wish I could say the same for most of the rest of the cast) and a slimy demonic creature designed by Ed French shows up very briefly at the end. Plus there's what might be the most depressing carriage ride through Central Park ever caught on film. You know you want to see that.
With Tim Gail, Ruth Collins (PSYCHOS IN LOVE), Amy Brentano (star of Findlay's BLOOD SISTERS), Jeanne Marie, Gary Warner, T.J. Glenn (IGOR AND THE LUNATICS), Roy MacArthur, Miriam Zucker, Gregory Sullivan, James Hogue, Jim Cirile and Kurt Schwoebel.
Score: 3.5 out of 10
Posted by The Bloody Pit of Horror at 2:13 AM