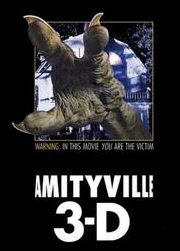 
Skeptical "Reveal Magazine" investigative journalist John Baxter (Tony Roberts) and his photographer assistant Melanie (Candy Clark) bust a bogus séance at the Amityville House. Soon after, the place is cleared out and John decides to buy it dirt cheap from Realtor Clifford Sanders (John Harkins), who seems more than happy to unload the place. Before John can even get the keys to the place, Sanders keels over from a stroke after a nasty encounter with a swarm of pesky flies. Thinking this is only mildly peculiar, John moves his stuff in and then the supernatural shit starts to hit the fan. Stuff starts moving around, there are plumbing problems, rooms close in, an endless hole in the basement seems to be a gateway to hell, spirits show up in Melanie's photographs and friends and family begin getting killed off in odd "accidents." There's a car crash, a drowning, a face fried by fire, some creatures and a pretty good nightmare sequence with a demon-corpse rises out of a water-filled hole in the basement. Eventually a team of paranormal experts (led by Robert Joy) are called in, but the house fights back and blows itself up, killing off most of the supporting cast. Tess Harper has the thankless role of John's ex-wife, who doesn't want her teen daughter (Lori Loughlin) to go over to dad's place. Meg Ryan has an early role as her horny blonde friend; who plays with a OUIJA board and says "Do you know you can have sex with a ghost?"


While nothing special, it was the only film in the series to be rated PG and is no worse than the two films preceding it (slightly better in many areas actually). Though they are lost on the video, there were some supposedly great 3-D fx in the theatrical release, including the opening titles, flies, steam, a Frisbee, breaking glass, a zombie, flying furniture and even a swordfish.