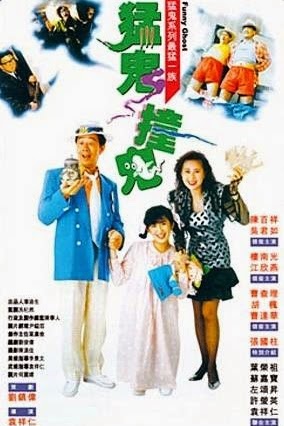 
If there is one thing there was no shortage of in the 80s, it was Hong Kong ghost comedies... and here's another one. PR girl Yue (Sandra Ng) is sick of her job and tight boss Manager Wu (Teddy Yip), who's so cheap he monitors the amount of toilet paper his female employees use. A gambling addict deeply in debt, Yue bets it all (as well as four of her co-workers' money) on a horse race, loses everything and then goes to her rich best friend Ngoh (Elvina Kong) for help. The only problem is that Ngoh's ex-husband has just taken her to the cleaners and now she's also broke. Deciding she can't go on, Ngoh decides to commit suicide and asks Yue to help her. Their attempt at walking out in front of cars backfires, so Ngoh decides to climb up on a rooftop and jump. Unable to, she asks Yue to push her, but Yue misses and ends up accidentally falling herself. In the same building, underworld criminal Boss Hung (Wu Fung) has just received a pair of urns; one containing the ashes of a pregnant Malaysian woman who was raped and murdered and the other her unborn fetus. During a fight, a bag containing loads of cash and the larger urn falls out of the window. Thankfully for Yue, some railing has managed to break her fall and she ends up in the same dumpster as the bag. She grabs it and takes off, little realizing what she's really in possession of. 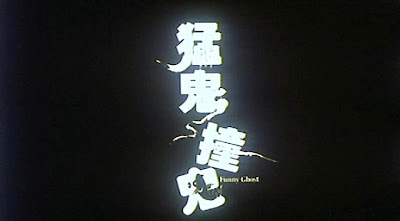 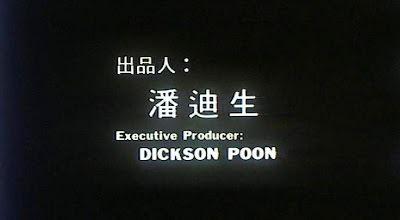 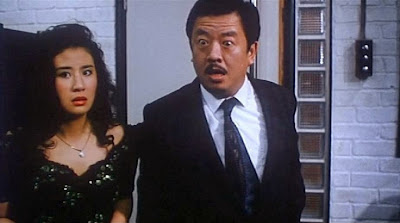 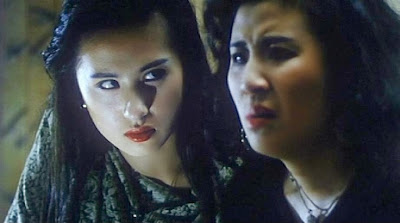 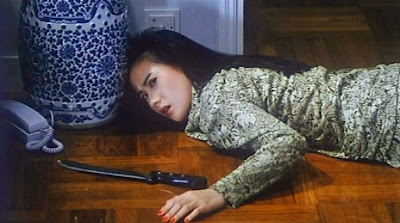 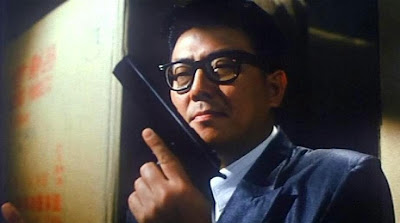 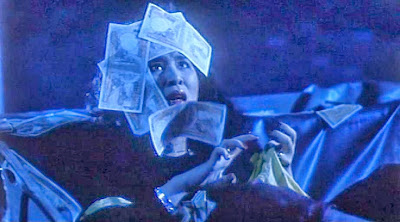 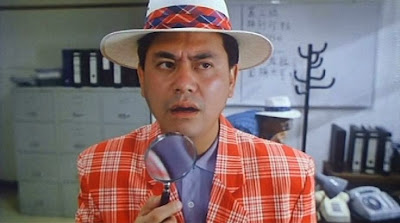 Ngoh is apprehended by the police and taken in for questioning, Hung sends out contract killer Ho (Billy Lau) to track down Yue and try to get the urn and money back and a pair of klutzy, bumbling idiot detectives (Nat Chan Pak Cheung and Charlie Cho Cha-Lee) dressed in loud, mismatched plaid outfits show up from Scotland Yard to assist Inspector Wong (Walter Tso Tat-Wah). Yue eventually discovers the power of the urn (which requires blood to activate) and uses it to get herself out of numerous sticky situations, as well as to make money. When her four female co-workers show up wanting their money back, she instead uses the urn to make them leave; instructing them to go pose for adult magazines and star in porno videos (!!) Once Ngoh is released, the two ladies go win a fortune at dominoes and gain the abilities of Bruce Lee to beat up Ngoh's ex-boyfriend and his friends. When the detectives go to Yue's apartment to question her, she uses the urn to transform herself into an elderly couple and a little girl to throw them off. Things end up at a warehouse where most of the principle characters become trapped with the long-fingernail-sporting female ghost (So Ga-Bo), whose spirit is finally unleashed once her urn is broken. 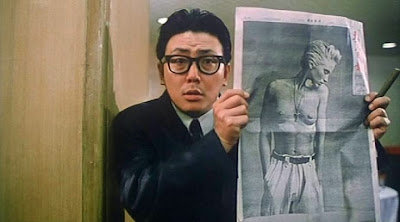 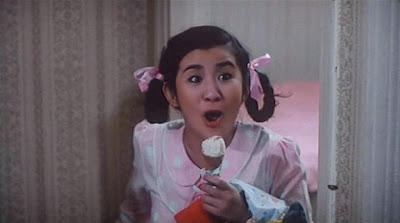 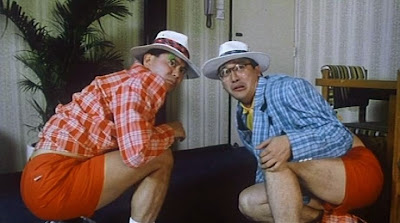 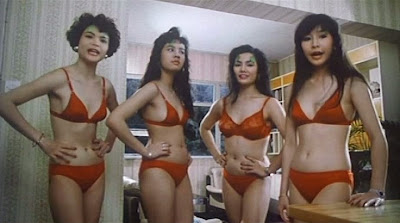 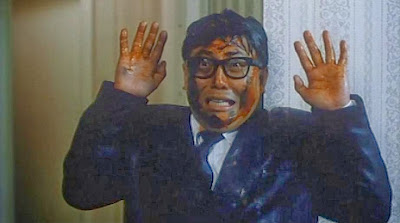 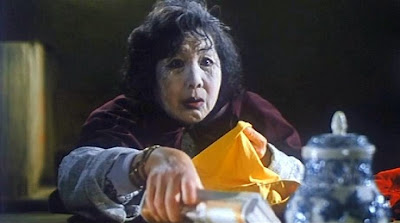 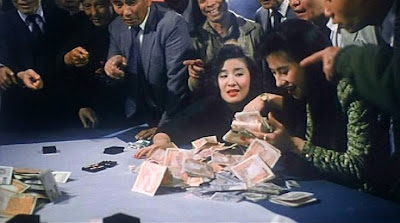 Primarily a zany, fast-paced comedy, this doesn't unleash its horror scenes until the final 15 minutes when the ghost finally materializes and starts heading out after the cast (and several become possessed), though even these scenes are played mostly for laughs. The choreography of the fight scenes isn't nearly as impressive or elaborate as what one would see in, say, Shaw Brothers productions. It's also really talky and there's a lot of mugging and some highly annoying characters to contend with. However, enough set pieces deliver genuine laughs to keep this from being a complete waste of time. A few scenes, in fact, actually had me laughing out loud and that doesn't happen a whole lot for yours truly. And who'd have thunk red underwear could be so useful? Most of the cast prove to be quite adept at slapstick. Ng in particular shows a genuine talent for physical comedy. I kept thinking how great she'd have been on some sketch comedy series like "MadTV" or "Saturday Night Live" while watching this. 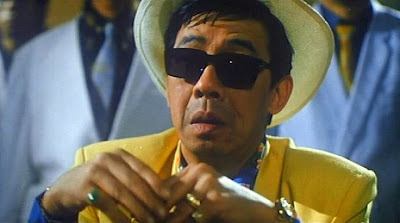 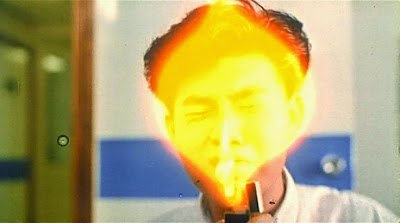 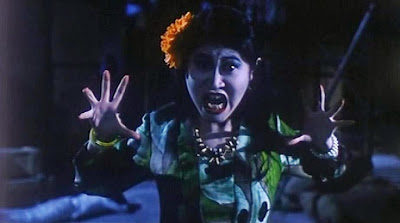 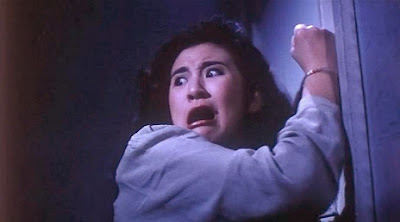 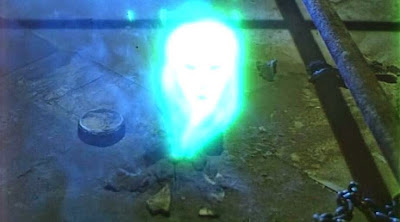 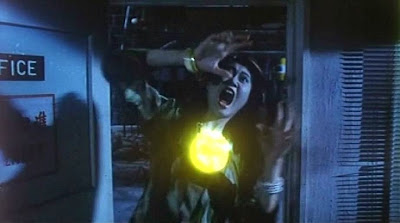 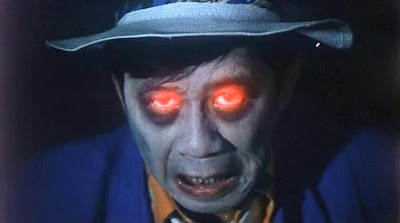 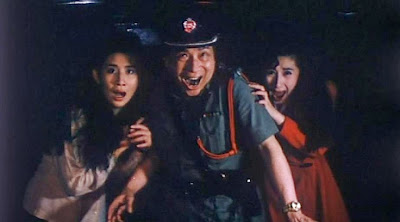 The screenplay was written by Jeffrey Lau, who also had his hand in around a dozen similar films from this time. Director Cheung-Yan Yuen has had a long career in Hong Kong cinema starting in the 1960s and was known mostly as an actor, stunt coordinator and fight choreographer on such films as The One-Armed Swordsman (1967), The Buddhist Fist (1980) and Once Upon a Time in China (1991). He later began working as fight choreographer on such American productions as Charlie's Angels and the Matrix sequels. As director, he also made Here Comes a Vampire (1990), Wizard's Curse (1993) and others. This has less martial arts action than one might expect given his track record.