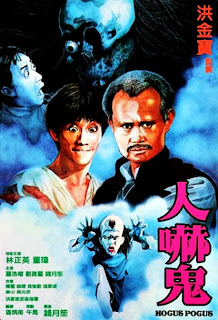 
Ghost comedies were all the rage in Hong Kong during the 80s... and here's yet another one from Golden Harvest. Things begin with an elaborately-staged theater production full of lavish costumes and stunts being put on by a traveling Chinese opera company. The leader Uncle Sheng is played by Ching-Ying Lam, the one-eyebrow priest from the later hit Mr. Vampire films. Though his profession in this one is different, he's already sporting a major facial imperfection (this time a hairy mole on his chin) and playing straight comic foil to a bunch of mugging costars during various supernatural gags. Lam's character is in charge of a bunch of immature young actors who are constantly pulling pranks on one another, which in the earlier scenes makes this seem like the Asian equivalent of an American summer camp movie. Kuei (Wei Tung) is usually the ringleader behind it. He easily swindles money and the best bed from the dumb Piao (Peter Chan) and pretends to be an angry ghost to trick another guy into eating mud that he'd just pissed all over. Kuei and the others stage a full-scale haunting to scare the shit out of smirky, arrogant star attraction Chia (Ho Kai Law). Maybe it'll teach everyone a lesson not to take all this stuff so lightly if a real haunting were to occur... and that's just what happens.

Deep in the netherworld, a mistreated, mischievous 300-year-old ghost with a blue bulbous head escapes into our world. Now let me stop here for a second and note that I couldn't tell whether this spirit was intended to be a male or a female. Though played by the male director, it behaves like a woman and even appears to have been dubbed over by a female voice. Whatever gender, it giggles and mugs for the camera constantly and quickly grates on the nerves tripping people, knocking things over and doing other obnoxious, destruction things. Not technically a ghost, it's actually a poltergeist and gets in the middle of a choreographed fight to ruin a performance and then decides to wreck havoc in Chia's room and destroy all of his wardrobe. So basically, the poltergeist stirs up shit, someone else becomes the scapegoat and the guys, blaming each other, get into long fights to make sure the martial arts quotient is met. Chia is eventually possessed by the spirit, threatens to kill everyone, threatens to kill himself, beats his head against a wall and then is rescued when they fetch a baby to piss on his head (!)

Realizing their troupe is now cursed by a destructive ghost, Uncle Sheng decides to kill two birds with one stone by working an exorcism into a stage show. They call forth the poltergeist and learn that in her human existence she was murdered and is now a wandering spirit who'll continue to live between our world and the next until her bones are properly buried. They find her remains underneath the stage, bury them in a nice location and then put her soul to rest. The end? Nope, there's still fifteen minutes to spare so this goes off on an entirely different (and suddenly serious) direction when a malicious, long-haired demon shows up to spoil the opera company's lavish celebratory feast. Lasers shoot out of nowhere and fry a guy, tables split in half, stuff explodes, chairs and people start flying around the room, cooked fish come to life, ghost POV shots weave over and under tables and a portal opens up on the wall and starts sucking stuff inside. Things end with an elaborate battle between our heroes and the flying, super-strong demon after they trap it inside a large room with blood-covered floors and blood-soaked nets. Whoa, where the hell did all that come from?

Though I thoroughly enjoyed the last 15 minutes (the action and fight choreography are great), it's tough to really recommend this one because of the slow and highly uneven start and the abrupt last minute change in tone. You also may think you're losing your mind during a sequence where the female cook has her finger bitten off by a turtle that pops out of a pot of soup and then gets tossed around a room by an invisible force while the famous Goblin score from Suspiria (1977) erupts on the soundtrack. Not content with just swiping the music from just one source, this also buffers its entire score with stolen and, in some cases very famous, music from Night of the Living Dead (1968), Carrie (1976), The Amityville Horror (1979), The Shining (1980) and even Tourist Trap (1979). I guess if nothing else, they at least they have great taste in horror film scores.

Filmed in 1983, Hocus Pocus (called "Hogus Pogus" on the DVD cover) was a big money-maker in Asia. It has never been released in the U.S. (possibly because the entire music score would have to be replaced).