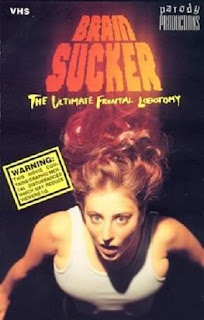 
Sitting through this entire video (distributed by bottom rung label Raedon) hurt my soul. And it didn't hurt so good either. First off, I need to confess that I had tried watching this at least three times in the past and found the first ten minutes so insufferably annoying I kept turning it off. Since then it has spent over 2 years hibernating on my computer's hard drive. I was finally sick of skipping over it. Sick of looking at the title all of the time. Sick of knowing deep down in the back of my mind it was there... in my life... No matter what I did or where I was at, a nagging voice in my head kept reminding me... "The Brainsucker is still with you... waiting to be watched... hogging up valuable space... making your computer run just a little bit slower..." I needed to finally rid myself of it. Instead of calling in an exorcist, I closed my eyes, took a deep breath, grabbed some ibuprofen, bit down on my lip and pressed play... I was going to do it this time, dammit! I was going to finish The Brainsucker if it killed me. If for no other reason, the world deserves a warning. And hey, maybe it would actually improve after the first ten minutes. Stranger things have happened. 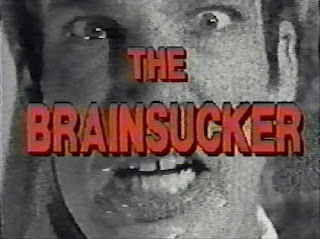 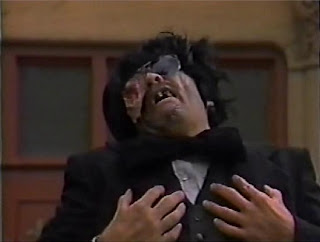 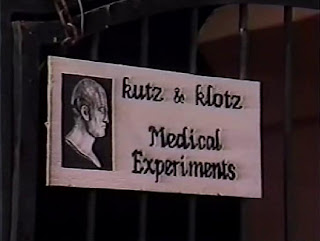 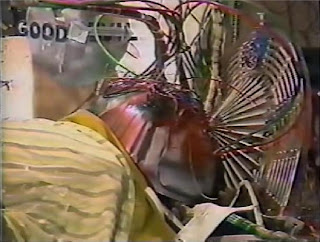 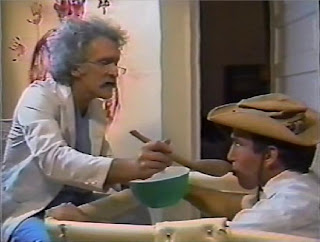 Max (Jonathan Middleman) is arrested for shoplifting for the fifth time in a week and taken before a screaming judge who has just sentenced a Rastafarian to probation for publicly passing gas. He calls Max an "amoeba" and a "cockroach" before a disfigured hunchback named Kutz (Dan Bush) comes to his aid. The hunchback slobbers, sticks out his tongue, speaks in a highly irritating and often unintelligible accent and offers the judge an arrangement: let Max go into his custody so they can perform behavior modification experiments on him and he'll never have to deal with him again. Since this film doesn't take place in the real world, the judge agrees. The hunchback then drugs Max's drink, wraps him in a rug and drags him back to his mad doctor boss Professor Klotz's laboratory. Klotz (Ralph Farrar) wants to create the first "completely positive super human being." His cardboard machine (which has a Frisch's Big Boy head on it) has two settings: "Good" and "Evil." He sets it on "Good" and leaves the room. The hunchback enters and turns the knob to "Evil" instead. 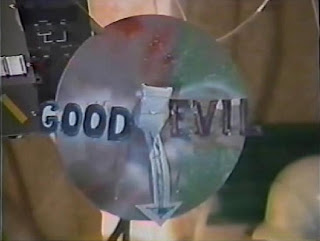 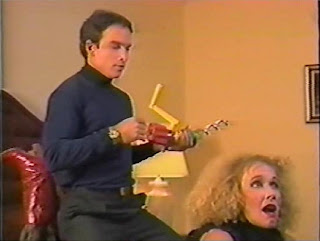 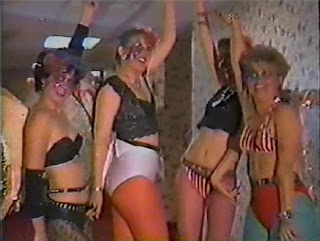 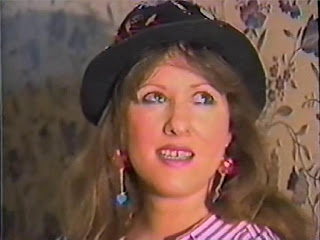 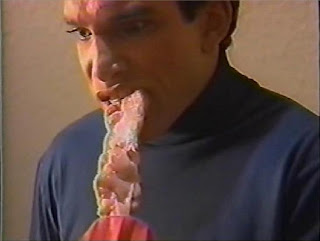 Soon after, Max lapses out of his very good and very evil personas. He steals some clear tubing and a corkscrew from the lab and runs off, swearing vengeance on the whole city for his predicament. He finally comes to the conclusion that he wants to suck out everyone's brains and starts with a couple of bikers who harass him. Max then pays a visit to his loving mother (Gay Nathan), who blames him for driving the love of her life away. She tells him "I should have killed you at birth!" and adds "I should have let them help make antitoxin for hook-and-mouth disease out of you or something!" (??) Max moves on to a hotel. Since he's saved up a few hundred dollars, he's able to rent out the Presidential Suite and he poses as a psychiatrist named "Mr. Suck." He lures a hooker, an old woman and her priest son back to his room, sucks out their brains and then hangs their bodies up in the closet. An actress named Joanna (Marjorie Morris) stops by and Max decides he likes her enough to let her live and begins dating her. 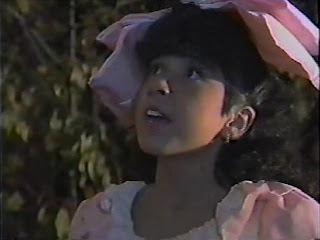 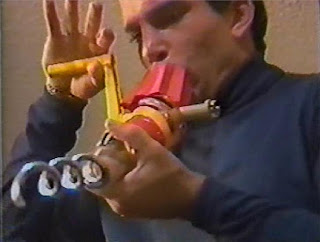 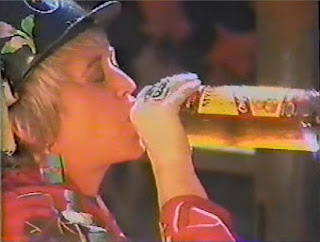 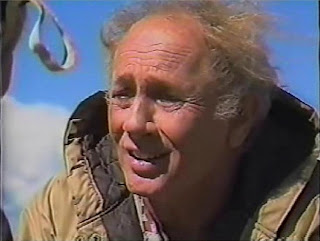 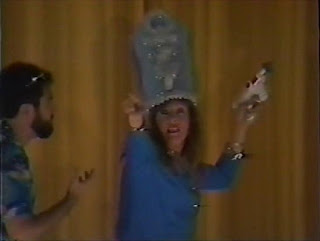 Max drags Joanne to a party, where he de-brains a slutty socialite (Judith Cameron) while she gives him head in the hot tub. He then takes Joanne to a drive-in theater and kills a virginal teenage girl in the bathroom while she sits on a toilet. Perplexed by the sudden outbreak in murders, Inspector Peugeot (Dave Stevens) calls in Detective Howard Kropotsky (the director) to help solve the case. The finale takes place at an airport, where the movie suddenly and desperately tries to convince of its deeper meaning! Oh, I'm sure it all made sense in Mr. Robins' mind. 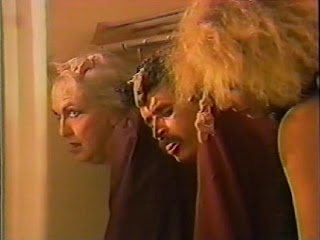 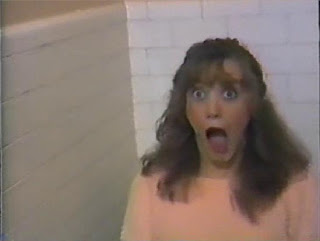 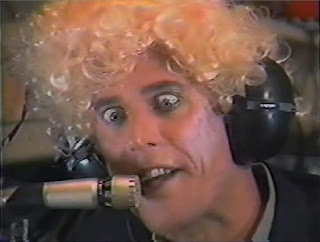 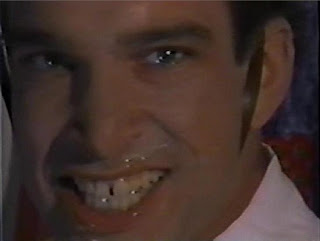 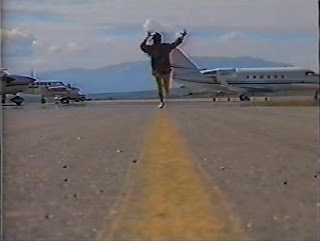 Shot with a camcorder around the Santa Fe, New Mexico area by the director of THE WORM EATERS (1977), who had also acted in several Ray Dennis Steckler films, this is amateurishly made, horribly edited and acted, has what is probably the most irritating theme song ever ("Brainsucker Rap"), is full of continuity errors and has sets and costumes so tacky they'd have been rejected by John Waters. Some lines of dialogue are repeated for no good reason, boom mikes are visible several times and during one scene I swear you can hear the director or cameraman talking in the background. The untalented cast flub their lines, overact, talk directly at the camera, scream all of their dialogue at the top of their lungs or speak in often unintelligible fake accents. But as stupid, technically inept, annoying and terrible as this whole thing is, I guarantee you won't see another movie quite like it. This thing is weird and then some.

Now into the dark abyss of my recycling bin you go, Brainsucker. Never to be seen again.

NO STARS!
Posted by The Bloody Pit of Horror at 8:25 PM

Hmmmm? So he topped The Worm Eaters!..?

Ha, I guess so... granted when you say "topped" you mean it manages to be even worse!

jeeze i laughed my ass off , i was 24 when i art derected and edited bran sucker , it was ahot on 3/4 umax and edited on "yes" Beta max , i also wrote and recorded the brainsucker wrap ,
Herb was akook he talked over every shot i had no choice but tonput his voice in there so i did ,it just got wierder the more it went along , thank you for writing this review i thought that film ended up in a trash bin , after i deliverd it i know Herb hated my edit but he had no way of changing it and most of the footage was unusable , so i just pieced it together best i could with no experiance , it was my first film , i e done better ones since then ,
check them out at www.lennyhoffman.com

Always nice to hear from someone who worked on one of these obscure films because they usually tell it like it is and explain more about the production problems than what you'd get from the director / producer etc. And you're a brave man for taking ownership of the Brainsucker Rap. I take it that is left off the resume.

The company that distributed this, Raedon, had about the worst quality catalogue of any label in the 80s and 90s but they DID manage to get a lot of tapes out there so Brainsucker will live on forever!

similar experience. checked off BRAINSUCKER yesterday after six or seven attempts over a bunch of years. the unbearable mistracked audio on the copy that's still floating around made it extra hard to concentrate for too long -- never got through more than a half hour before. probably would have liked it as a kid, reveling in the incredible ineptitude, the bizarre hateful monologues, weirdo improvisation, the outsider romance... just the idea that something this untethered and abnormal actually existed. i still enjoyed some of those elements, but these days, it's migraine fodder overall.

It taking six or seven attempts to watch is a ringing endorsement if I've ever heard one!

I'd still consider this one of the most irritating movies I've ever sat through, though there are a few worse. Science Crazed and Night of the Dribbler, anyone?