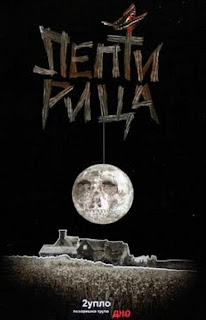 
Yugoslavia wasn't well-known for their horror output (or movie industry in general, really), but there were a handful of pre-1990 genre films produced there over the years. The Barbara Steele vehicle THE SHE-BEAST (1965) and Lucio Fulci's AENIGMA (1986) were Yugoslavian co-productions, and there was also STICENIK (1973), VARIOLA VERA (1982), STRANGLER VS. STRANGLER (1984), DEJA VU aka Reflections (1987) and A HOLY PLACE (1990), among others. Most of these were not released outside of Europe. Leptirica (which is translated on the subs as meaning "The Moth," though I also see it listed as "The Female Butterfly" or "The She Butterfly") is a 62-minute vampire tale which debuted on TV and was based on the story "Posle devedeset godina" by Milovan Glisic. It's set in the small, pastural, impoverished village of Zarosheje, where most of the townsfolk - even the priest! - seem to just lazily lie around getting drunk. The town depends heavily on a small water mill, where wheat is ground into flour, to provide them with food. Unfortunately, each miller they've hired has been mysteriously killed off. Since the victims have their necks gnawed up, everyone starts to believe that a "vukodlac" (vampire) is the one committing the murders. And, of course, they're correct. 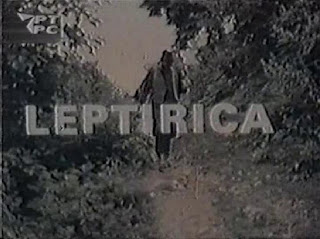 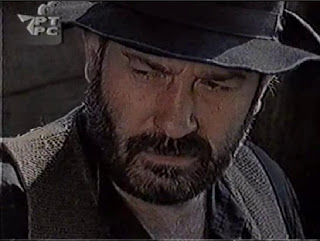 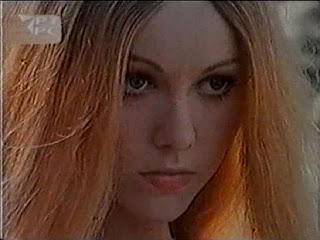 The story revolves around three primary characters. The first is Zivan (Slobodan Perovic), a stern, antisocial, hard-working farmer who lives on the outskirts of town, does his own thing and doesn't really fraternize with the rest of the villagers (can't say I blame him because they're a bunch of loud drunks). The second is Radojka (Mirjana Nikolic), Zivan's sheltered, "beautiful as a butterfly" daughter, who spends most of her time in the fields tending to the sheep. The third is Strahinja (Petar Bozovic), a young man whose parents are dead. Strahinja has fallen in love with Radojka and wants to marry her, but Zivan refuses to offer up his blessing because he claims his potential son-in-law is too poor. Feeling he's fighting a losing battle, Strahinja decides to become the latest miller so he can save up enough money to leave the village. His first night at the mill, he's attacked by a cloaked, hairy-faced fiend with sharp fangs and claws, but manages to survive the attack by hiding under some bags of flour. He reports what happened to the villagers and they organize a posse to wipe out the vampire. 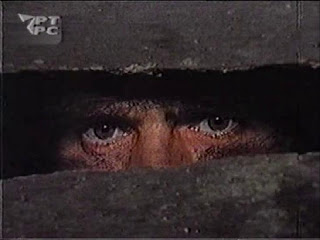 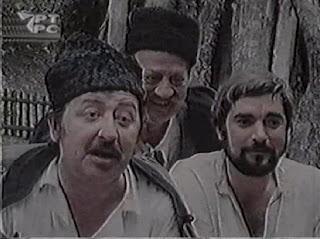 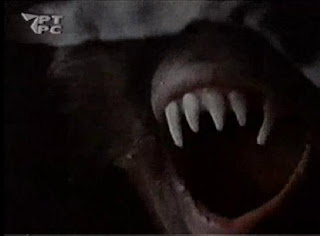 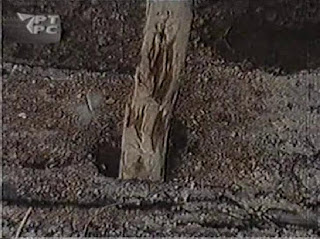 The killer may be Sava Savanovic, or connected with Sava. Despite being dead for centuries, Sava is still well known in those parts as having been a vampire and perhaps is now back from the dead via either reincarnation or possession (it's never quite explained). One major problem the villagers face is that no one knows exactly where Sava is buried. Customs state that a stallion can lead them there, so they get one and it indeed directs them to an unmarked grave. Instead of opening the casket, they drive a stake directly into it and then cover it with holy water. A butterfly, which seems to be representative of an evil force here, flies out. Despite not capturing or killing it, the villagers believe they have finally rid themselves of the curse. Some guys finally coerce Strahinja into going to Zivan's and taking what is rightfully his; Radojka. They storm into the home and run off with her, then plan a wedding. Things don't quite work out as planned for the groom. 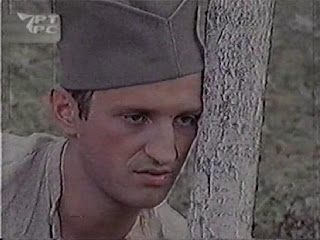 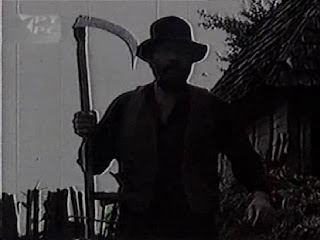 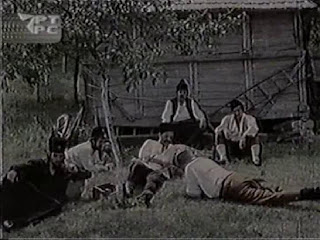 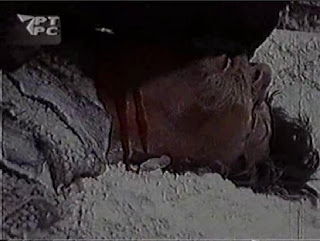 Leptirica isn't particularly well-made or well-acted, has an unsteady tone (comedy elements often seem forced or completely out of place) and it really lacks visual punch, though it's watchable, has a few faintly eerie moments and the country setting provides an interesting backdrop to the action. The biggest problem is that the whole thing is just too predictable. We pretty much know where it's going from the beginning and the film offers up very few surprises along the way. The vampire make-up, with the hairy-face and mouth full of sharp fangs, and the fact the vampire makes chimpanzee-like noises, is a little unusual. Even more bizarre, a man supposedly "died of fright" while watching the premiere on TV, which had tabloids of the day labeling the director a "terrorist!" 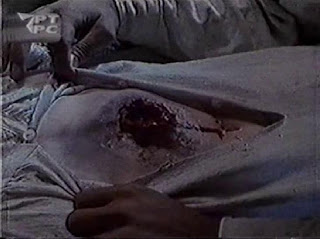 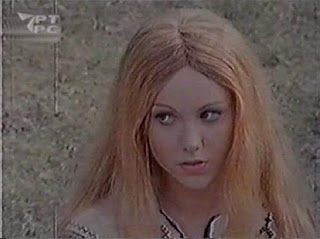 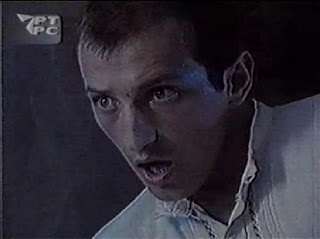 Never released in the U.S., this currently has the ridiculous, excessively high rating of 8.1 on IMDb, which I attribute to nostalgic viewers, or patriotic ones. The film is more like a 5 or 6.

Although I've not seen this one yet, I heartily recommend A Holy Place, which I believe is by the same director. Good take on a Gogol story, with uneasy sexual undercurrents.

Yep, it's from the same director. I just looked it up and see it's an adaptation of Gogol's "Viy." Is it available on DVD with English subs? Might be interesting to compare it to the 1967 Russian version of Viy, which I just watched last night (a little goofy at times but the final 10 minutes were amazing!)

I don't think A Holy Place has any legit DVD release unfortunately. I got what I presume was a fan subbed TV rip from Megavideo last year so I presume it must be circulating in other such places as well.

I looked around and found an English fansubbed copy, so I'll be adding this to my summer viewing list.

With respect, a few points of contention.

1) "Yugoslavia wasn't well-known for their horror output (or movie industry in general, really)"
Yugoslavia had the finest movie output of any Eastern European country of the day. In fact, it was comparable in the number of films produced even to Hollywood. However, you are right in saying that a lot of them didn't get distributed outside of Europe, however, at the time, there was hardly a year in which the Cannes film festival didn't have a Yugoslav film playing there. Also, six Yugoslav films have been Oscar-nominated. "The Battle of Neretva", the most profitable (if far from the best) Yugoslav film of all time was released in the US with a score composed by Bernard Herrmann and a poster painted by Pablo Picasso.
"Kelly's Heroes" was also a Yugoslav co-production, btw.

3) "Leptirica isn't particularly well-made or well-acted"
I have to strongly disagree with that statement. The cast is top-notch in every aspect and Djordje Kadijevic is one of the finest Yugoslav directors of all time. His technique is impeccable. Also, note the marvellous cinematography in the scene in which Radjoka observes her reflection in the water. The bad quality of the available print may make it difficult to see but that shot is breathtaking and the atmosphere of that scene is beyond eery.

4) "has an unsteady tone (comedy elements often seem forced or completely out of place)"
The problem with this statement is that "Leptirica" was originally intended (and made) as a comedy. The biggest problem with foreigners coming to "Leptirica" is that Serbian humour really doesn't translate well. All of it hinges on wordplay and delivery so the content of the joke alone won't make you laugh. I can guarantee, however, that whenever shown to a Serbian audience, "Leptirica" absolutely kills (no pun intended). Also, if you ever go to a Serbian village you'll recognise all of these characters and their behaviours. Above all else, "Leptirica" rings soooo true it's unbelievable. Each of them from Živan to the drunken priest reminds me of people I know.

5) "The biggest problem is that the whole thing is just too predictable."
Well, that's sort of like saying "Dracula" is predictable. It is now! "Leptirica" was the first Yugoslav vampire film and at the time was seen as original and surprising.

6) "the vampire makes chimpanzee-like noises"
Those noises are of an actual bird you can hear in certain parts of former Yugoslavia.

7) "this currently has the ridiculous, excessively high rating of 8.1 on IMDb, which I attribute to nostalgic viewers or patriotic ones"
I'm neither nostalgic (the film was made before I was born) nor patriotic but I think "Leptirica" is a classic. The hilarious comedic moments make the downbeat ending all the more depressing and disturbing. Kadijevic wasn't going for shocks or outright scares here. Each and every one of his films was made to stay with you. Not to have an immediate effect but rather to hit you when you go to sleep or tomorrow or even a few weeks later. Also, his desired effect is not scares but rather a lasting feeling of depression and melancholy.

Thanks for all your notes Mateja. Often times when I say not well known, I mean on a global scale. Most Yugoslavian films were never given a global release and are extremely difficult to find and even harder to find with subtitles. I can only really think of a few off-hand that were released outside of Europe. Not saying they don't have many acclaimed and great films there. Actually most of the movies I've seen from there I've liked a lot and look forward to seeing more.

And you're absolutely right that a lot can be lost in translation. I have no clue how well or accurate the film was translated into English. The only copy I had (as you can probably tell from my photos it was awful quality) had fan made subs so that very well could have been an issue. This is one of those movies I'd likely revisit if I found a better copy of it in English.

Leptirica is released officially on dual format edition in Germany by Ostalgica.