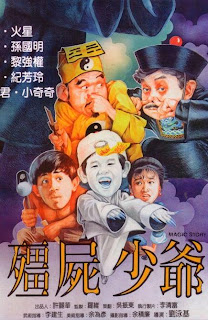 During the opening credits, three vampires are resurrected, turn into cartoon bats and fly out of a castle. And that ends up being the highlight of this unfunny, lackluster MR. VAMPIRE rip-off. The vampires go to a small village and start killing, starting with a night watchman. A professor (Bill Tung) needs vampires for his experiments and sends his bumbling idiot assistant Akui (Mars) out to find some; promising him 5 bucks per vampire. Too bad the assistant is a complete buffoon who's unable to procure a corpse and is too busy trying to romance the scientist's daughter Ahua. A greedy, red-nosed, bogus priest named Mao Shan has been stealing bodies from the morgue to add to his small army of obedient vampires. Using spell paper attached to the foreheads, he's able to make them jump, turn, go up or down and do other basic commands. Though it doesn't really say, it seems he's using his vampires to scare the villagers and then makes money on the side by selling them charms that supposedly ward off vampire attacks. The corrupt police captain and his klepto chief aide Wang are also in on the scam.

Akui finds a cutesy and mostly benign little child vampire that can be summoned using a gold pocket watch. He nicknames him (what else?) Ding-Dong. Ding-Dong has his own theme song and there's even a cheesy musical sequence set in some kind of black void where the kid vamp plays with other child vampires while a children's choir sings about innocence and how children are "a precious treasure." Ick. The little vampire follows Akui around like a lost puppy, mimics his every move, wraps him up like a mummy, hangs from the ceiling by his fingernails and tries to shave. Akui takes him outside during the daytime and when his sunglasses are accidentally removed, he become ill and wll turn into a pile of ashes unless the scientist can cure him. He comes up with an idea about sending electronic waves through Ding-Dong, which works. But by that point, the bad guys get their hands on Ding-Dong. In a twist lifted directly from MR. VAMPIRE II (1986), the main vampires that have been haunting the village turn out to be Ding-Dong's parents and all they want is their kid back.

For a good hour plus, this is nothing but sub-Three Stooges slapstick scenes featuring idiotic characters doing idiotic things accompanied by comic sound effects. The real action doesn't come until the last fifteen minutes, when our heroes, the bad guys, the vampire parents and a super-strong vampire granny (played by a man in drag!) start fighting. These scenes are passable and utilize decent stunt and wire work, but by this point it's too little, too late. Mythology from the Mr. Vampire series is reused (the spell papers, holding one's breath to keep vampires away, etc.), though this does come up with one new trick to add to your vampire fighting arsenal... piss. Yes, apparently piss can keep vampires away. But only the piss of a virgin (!!!) During the finale, when Akui can't "make water" he's instructed to rub garlic on his privates to speed along the process.

The film went unreleased in American until a few years ago, when Deimos put it on a double DVD ("Eastern Horror: Volume 4), where it's paired with the Indonesian ghost / zombie horror SATAN'S SLAVE (1982).