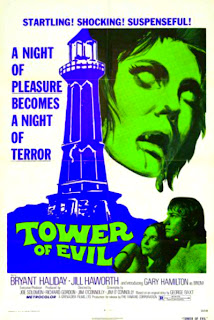 Higher levels of sex and blood than usual, plus its possible influence on later slasher flicks, are all that separate this from the pack. Two fishermen; elderly John (George Coulouris) and his son Hamp (Jack Watson), venture onto Snape Isle, a small, fog-bound, rocky island that's barely big enough to house a single lighthouse. As soon as they step foot off the boat, they find a naked, dead man face down in a puddle of water (plus a crab chowing down on his dismembered hand). Upon further investigation, they find a decapitated girl and another dead man pinned to a wall with a spear. Suddenly, a crazed young woman pops out, stabs John to death and is then knocked unconscious by Hamp. The girl - Penny (Candace Glendenning - star of the sleazy SATAN'S SLAVE) - is taken to a psychiatric clinic and subjected to tests that are supposed to unlock the secrets to what happened there. Though in a "complete state of catatonic stupor;" doctors are able to use a drug and multi-colored lights to kick start Penny's brain long enough to get some information out of her. Too bad the next batch of visitors to Snape Isle aren't privy to the info before they head there...

Because one of the murder weapons was an ancient, solid gold Phoenician ceremonial spear, "one of the most exciting archeological discoveries" in years, and that confirms rumors that a wealthy explorer died there and was buried with his treasure years earlier, Professor Lawrence Bakewell (Dennis Price, in a one-scene cameo) decides to put together an expedition to be headed by Dan Winthrop (Derek Fowlds). Also coming along are Dan's wife Nora (Anna Palk), art expert Rose Mason (Jill Haworth), Rose' ex-fiancé Adam Masters (Mark Edwards) and investigator Edward Brent (Bryant Haliday, from the memorable DEVIL DOLL), who's been hired by Penny's parents to find out what actually happened on the island. Hamp, whose brother Saul and his family used to live on the island (before they mysteriously drowned), and his first mate Brom (Gary Hamilton), are in charge of captaining the boat to get them there.

After the expedition arrives, someone, or some thing, manages to blow up their boat, stranding them there. And then the movie plays out as your standard stalk-and-slash where those dumb enough to wander off by themselves - when they should know better - get killed off. Someone's pushed from the top of the lighthouse. Another gets a sword stuck in their head, a neck is snapped and someone's burned alive. Underneath the island are a series of caves containing the treasure and a giant gold statue to an ancient God.

It opens strongly, with an opening sequence that pulls you in and well-edited scenes of Penny recollecting her horror vacation afterward, but once the expedition arrives on the island it becomes a bit too routine. The characters are neither sympathetic nor interesting, and the identity of the mystery killer isn't much of a surprise. Still, there's much here to admire: an unusual island setting, decent art direction, handsome photography courtesy of Desmond Dickinson, and, of course, plenty of bloody moments, as well as some nice eye candy provided by Glendenning, John Hamill and Seretta Wilson. Palk doesn't get naked, but she runs around in little more than a bra for the duration of the movie. The cast also includes Anthony Valentine as a psychiatrist, William Lucas as a police inspector, Robin Askwith (of "Carry On" fame) and UK cameo queen Marianne Stone.

Director O'Connolly had previously made BERSERK! (1967) with Joan Crawford, which was also considered quite violent for its time, and the cowboys vs. dinosaurs film THE VALLEY OF GWANGI (1969).

Original theatrical version THE HORROR OF SNAPE ISLAND runs 85 minutes and had five minutes removed. It was also on video as BEYOND THE FOG.