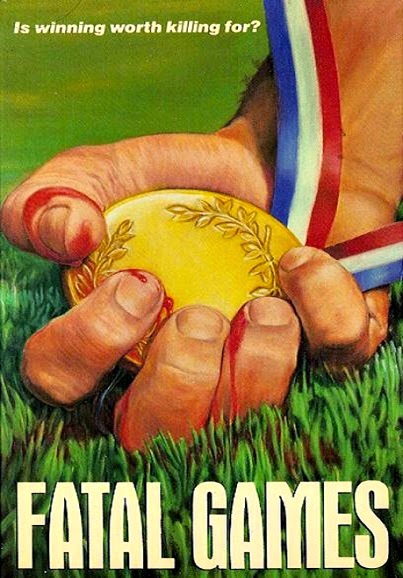 hope you had a good movie-year, hope to see you here again soon.

(FATAL GAMES never got near the VCR in the old days; marked it 'seen' 3 weeks ago. aside from the L+B sightings and -- "you-gotta-be-kidding!" -- that guy on crutches hobbling around in the dark for like 10 straight minutes, it's already evaporated from memory.)

I'm jealous you had such a great year. I maybe got 150 in and some of those weren't horror or are too recent to review here. Barely ANY the past three months or so, which kills me. I'm hoping things start slowing down for me here sometime soon. This next month is going to determine a lot so we'll see what happens! *crossing fingers*

Funny, I remember next to nothing about this movie, but I did find a Chuck Woolery (!!) talk show clip where Sally Kirkland and Linnea Quigley both happen to be guests and they briefly mention this!

ha. lasted just 13 weeks. 43rd of 64 episodes, aired november 13th, 1991. cool clip! asked about her first horror film she describes a scene from GRADUATION DAY. DON'T GO NEAR THE PARK is earlier... i haven't seen that, though.

Funny, I didn't even KNOW he had a talk show until I stumbled upon that! She seems to have done at least a couple of horror films before Graduation Day. Psycho from Texas I think may have actually been the first she did. In fact, I think I remember her mentioning elsewhere that it was her first. It's probably hard to keep track. I have a hard enough time remembering what I did last week let alone 20 years ago. lol