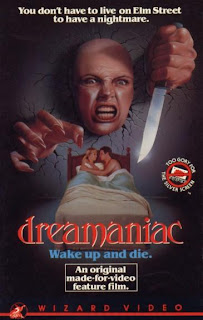 As a teenager, David DeCoteau was already working professionally in the movie business. He began as a production assistant on ESCAPE FROM NEW YORK and the Corman production GALAXY OF TERROR (both 1981), worked on craft service for such films as Ken Russell's CRIMES OF PASSION (1984) and also did some sound editing under the alias "Richard Chasen." Somewhere in between he got involved in the adult film industry (using the name "David McCabe") and would have over a dozen (mostly-all-male) X-rated features under his belt before the age of 25. The gory supernatural slasher DREAMANIAC (1986) - backed by Charles Band and released through his company Empire Pictures - was DeCoteau's first foray into 'legitimate' films as a director. He produced the film and probably also wrote it using the name "Helen Robinson." It possesses all of the earmarks of a low-budget slasher film from a first time director from this era, including terrible dialogue, God awful acting, inept direction, sloppy continuity errors, cringe-inducing attempts at humor and a bare minimum of both plot and location change. The budget was just 60,000 dollars, it was shot-on-video and though technically abysmal all the way around, it's fairly entertaining because it's gory (far gorier than the other films I've seen from the director) and the 80s sensibilities are occasionally amusing.

The film opens as Adam (Thomas Bern) has a nightmare about walking down a red-lit hallway naked and encountering an evil (and naked) woman in a blood-filled bath. As it turns out, our young hero has been toying around with black magic and has somehow managed to summon up a seductive succubus named Lily (Sylvia Summers). Let me take a brief time out to comment on Adam. Considering the fact he's supposedly a Satanist metal musician, Adam is hilariously wholesome, clean-cut and mild-mannered. He's even decked out in glasses and a ... Def Leppard t-shirt. Adam has a "punk" girlfriend named Pat (Kim McKamy) who has a preppy, sorority-hopeful sister named Jodi (Lauren Peterson). For some reason Adam agrees to let Jodi host a party at his house for her snotty sorority sisters - including the extremely unpleasant and slutty Francis (Cynthia Crass), who has her sights set on Jodi's boyfriend Brad (Brad Laughlin). Pat makes hash brownies for the occasion. The guests show up. Then the succubus shows up. And then the guests start getting killed by the succubus. Some of the victims return to life as zombies to try to kill the others. The end.

Originally released by Wizard on VHS in a large-side display case proclaiming it "Too gory for the silver screen!" The film did well enough to prompt more Band/DeCoteau efforts, including the cult classic SORORITY BABES IN THE SLIMEBALL BOWL-O-RAMA (1987), the fun sci-fi comedy DR. ALIEN (1989), the above average sequel PUPPET MASTER III: TOULON'S REVENGE (1991) and many others.