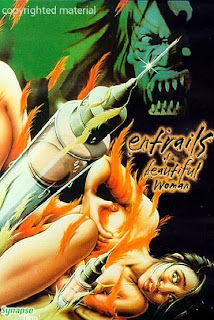 ...aka: Entrails of a Beautiful Woman
...aka: Entrails of a Beauty
...aka: Guts of a Beauty
...aka: Guts of a Virgin 2
Directed by:
Kazuo 'Gaira' Komizu
A sadistic, impotent crime lord, his sick-o girlfriend and a handful of brutal yakuza thugs keep busy peddling their highly-addictive street drug/ aphrodisiac, "Angel Rain." Young Yoshimi tries to infiltrate their group to find out what happened to her sister (who was sold into slavery) and ends up getting gang raped and shot up with the drug. She later commits suicide by leaping off the roof of a building. A female psychiatrist who was the last person to see Yoshimi alive decides to try to find out what happened and is herself kidnapped, gang raped and injected. She ends up overdosing and her body, as well as the body of a yakuza traitor they've recently hacked to pieces, are disposed of in an open grave. Somehow the two bodies end up melding together to form a big, red, slimy hermaphroditic monster equipped with a killer tool. And by killer tool I mean a killer penis. And not just a killer penis, but a killer penis that can fold inside to reveal a killer vagina. Now there's some sleaze movie ingenuity for you. The monster then goes around killing all the bad folks in sexualized ways best not spoiled by me.
It's an immediate, unrelated follow-up to the same director's ENTRAILS OF A VIRGIN (1986) and some minor improvements have been made here. Unlike the first, there's something of a plot. It's not much, but it's enough to center all the sex-and-violence action around while not getting in the way of the sex-and-violence. And believe me, this film exists solely to showcase sex and violence, particularly the former (a third of its 68 minute run time is set aside just for rape scenes). Another improvement is that the women being sexually assaulted actually act like it's more than just a mild inconvenience for them. Add a motive for the killings and characters who could be seen as protagonists (two other things the first movie lacks) and you have a film that's slightly better thought out than its predecesor.
Still, I wouldn't call this a good movie by any stretch of the imagination. It's cheap, poorly made and, if you're not a fan of prolonged rape scenes, pretty tedious. Not only that, but it probably seemed way more outrageous and shocking back in 1986 than it does now. Since then, we've had all manner of killer vagina/penis movies to sink out teeth into, so there's little - if any - novelty shock value left remaining here. If you want to see an intriguing body horror film there's always early Cronenberg and if you want something a little seedier dealing with the effects of drugs and featuring a phallic parasitic monster, I'd recommend Frank Henenlotter's BRAIN DAMAGE (1987) any day of the week over this one. Hell, even Henelotter's highly uneven recent release BAD BIOLOGY (2007), which also features killer genitalia, is far better than anything you'll see in this one.
The DVD is from Synapse, who also released the first film. The third (and final?) film in the series is RUSTED BODY: GUTS OF A VIRGIN III (1987).
★★
Posted by The Bloody Pit of Horror at 1:20 AM