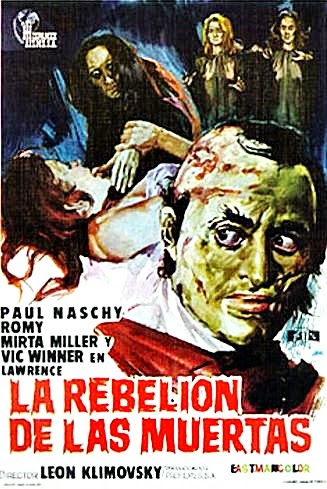 
Oh, Paul Naschy. I like ya and everything, but sometimes you just bite off more than you can chew. Here we have the bones of a fine little voodoo / zombie exploitation movie, with a handful of well-directed and surprisingly potent shock scenes, some of the brightest, most amusingly gaudy colors this side of H.G. Lewis and just enough blood and nudity to please the target audience (Eurotrash enthusiasts). But it really could have been so much better and at the end of the day the debits mainly fall into Mr. Naschy's corner... and I'm not just talking about him being hilariously cast as an East Indian mystic wearing a bad wig under his turban, either. That I can actually live with. What I couldn't deal with is the unfocused and woefully convoluted screenplay provided to us by the star/writer. An irritatingly inappropriate score provided by Juan Carlos Calderón certainly doesn't help matters.

In London, a masked, caped serial killer is on the loose and his female victims don't seem to stay dead for very long. After her father is hung, another relative is axed in the face and zombified cousin Gloria (Norma Kastel) attacks her in her bedroom one night, Elvire Irving (Romy) comes to the conclusion it's probably best to hop a train and split town a.s.a.p. While a male acquaintance, Lawrence Redgrave ("Vic Winner"/ Víctor Alcázar), stays to assist Scotland Yard detectives Hawkins (Antonio Pica) and Basehart (Ramón Lillo), Elvire decides to go stay in a country home owned by Krisna (Naschy), a peaceful Hindu mystic whose teachings she's recently become infatuated with. Also living there are black chaffeur Ti Zachary (Pierre Besari), maids Elsie (Maria Kosty) and Susan (Elsa Zabala) and Krisna's assistant and lover Kala (Catherine Zeta Jones look-a-like Mirta Miller), who feels threatened by the new woman in the house.

It is eventually revealed that the psycho who's running around London killing people is Krisna's brother, Katanka (also played by Naschy). Katanka raped and murdered a woman in India, was hunted down by some visiting Brits and then was torched in his home. Now with a burned face, Katanka wants revenge against those who tried to kill him by turning the family's most beautiful daughters into zombies that help assist him in killing the others. He also utilizes wax voodoo dolls to control people or make them kill themselves. There are too many incidental characters and the film just plods along from one incoherent scene to the next until deciding to finally start making sense an hour plus into the movie.

But it's all very vividly photographed (by Francisco Sánchez) and there are some great scenes in here that make it worth watching. My favorite bit is a nightmare sequence where Elvire envisions herself as sacrifice during a black mass ritual complete with a chicken getting its head cut off, zombies rising from their coffins and a horned Satan (Naschy once again). There's also a great scene where a train station worker (Luis Ciges) is forced to cut his own throat and a memorable decaptitation. The zombie make-up is more in line with pale voodoo zombies instead of the rotting zombies we normally see today. Also in the cast are Aurora de Alba (the vampire woman from FRANKENSTEIN'S BLOODY TERROR) as a nude victim / future muerta and Montserrat Julió and Fernando Sánchez Polack as grave robbers.

Released in a cut version several times on VHS (through All Seasons Entertainment, Vogue Video, etc.), the uncensored DVD release from Deimos (a beautiful print of the film which comes with an intro from Naschy and other cool features) is pretty much the only way to go now.