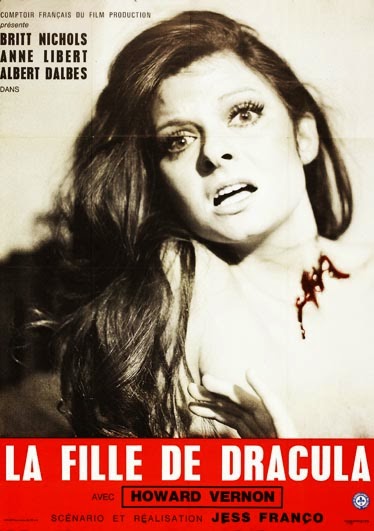 ... aka: Daughter of Dracula

... aka: Dracula's Daughter
... aka: Eine Jungfrau in den Krallen von Vampiren
... aka: Filha de Dracula, A


A narrator tells us about how Castle Karlstein is rumored to have been the former home of Count Dracula. Then a woman takes off her top, walks around sipping wine and gets into a bath, where a female vampire attacks her. Afterward, Luisa (Britt Nichols) shows up just in time to have one last conversation with her elderly mother before she passes away. The dying woman tells her daughter that’s she the last descendant of the Karlstein family, then gives her a key to a tower in the family castle, tells her to prepare to see horrible things and then lets her know some of her descendants were vampires. Luisa goes to the tower and finds two coffins inside. The lid blows off one of them and a still-living Count Dracula (Howard Vernon) is inside, shows his fangs and puts the bite to his distant relative. Next thing Luisa knows, she’s attacking strippers and seducing her lonely cousin Karine (Anne Libert) after they reminisce about gouging out a bird’s eye with a needle (!) as children. The ladies go at it during a long lesbian scene while Karine’s father Count Max Karlstein (Daniel White, who also helped compose the score) tickles the ivories and the camera zooms in on parts of the piano, thighs, hands and *a-hem* other parts of the ladies.

Inspector Ptuschko (Alberto Dalbés) shows up to investigate the rising body count of naked women in the area. The Karlstein family secretary, Cyril Jefferson (played by the director) uses silly phrases like “blood-drinking, darkness-despising birds” and is an expert on things of the supernatural, but nobody believes him when he tells them what's going on. Ana Kramer (Yelena Samarina), who runs the local bar and pay-by-the-hour hotel, is married but secretly having an affair with Max. Charlie (Fernando Bilbao), a nosy reporter, is snooping around and doing his own private investigating. Sorry if you’re wanting more vampire action because the film spends more time with the above people than it does with the vampires.

As the vampire count, Vernon unfortunately doesn't get to do anything interesting. Hell, he doesn't even get to leave his coffin since he gets special deliveries made to his tomb from Luisa, who drops a topless barmaid into his coffin for him to feast on. The ending features a stake driven through a forehead instead of a heart. Said ending is also a pathetic, suspense-free non-event (kind of like the rest of this film) where characters just casually stroll into the tomb and kill them and that’s it. I couldn't even see one of Franco’s most staunch supporters defending this dull trash, but I’m sure some of them do. You’d be hard pressed to find a less interesting vampire movie out there. Neither the story line nor the characters generate any interest whatsoever, and the scant horror scenes fail to deliver in atmosphere, chills or bloody good fun. Though it’s fairly well-photographed and utilizes a few nice locations (especially the excellent castle setting, with a long garden full of statues and Autumnal colors leading up to it), there’s not much actual visual style present, unless you count zooming in to crotches or random shots of a beach as being high style.

By conventional standards, the nudity quotient is high, with two fairly long lesbian scenes and two nude victims. However, by Franco early 70s standards it’s actually quite low. I just watched Franco’s THE DEMONS right before this one and, while it’s also not very good, it at least offered loads of nudity, some blood and attempted a period setting and story line. If you absolutely have to watch one of these, chose that one instead. Nichols, who has a very contemporary, almost "supermodel" look about her, is very nice to look at, but it's a shame she happened to stumble upon Franco during this stage of his career.

The title screen on the version I watched (from Bertucci Film Entertainment) was Eine Jungfrau in den Krallen von Vampiren ("A Virgin in the Claws of Vampires"). It has some of the worst English subtitles I’ve seen, which are small, flat and extremely difficult to read. Lina Romay makes her first appearance of many in a Franco film. She’s in the second scene for about 15 seconds and has no dialogue.