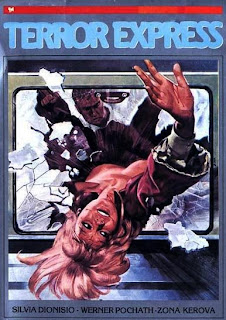 Directed by:
Ferdinando Baldi
Semi-entertaining smut from Italy, falling into the sub-category of LAST HOUSE ON THE LEFT-inspired flicks that were very popular in the mid to late 70s. This isn't even the first one that's set on train (that would be the humdrum 1974 effort NIGHT TRAIN MURDERS), but it's full of nudity and all the sex, sexual perversion and sexual violence you'd expect from one of these films. In fact, there's so much sex going on in various combinations that the film often forgets to be suspenseful or thrilling, let alone scary, even though it is usually categorized as a horror film. The action starts at a train station. We're briefly introduced to some of the characters before everyone boards for a trip to Germany. There are around a dozen passengers. Among them are a trio of loud, obnoxious, sadistic thugs who seem to get off on acting like jackasses and irritating people. They; German "poet" David (Werner Pochath), Ernie (Carlo De Mejo) and Phil (Fausto Lombardi), start off by harassing a young woman until she gets off a pay phone. At dinner they book a table for four (the extra setting for their "pet corpse"), yell, hit on some of the women, play their music loudly, trip a waiter and then berate him, poor beer on the floor, threaten people with a switchblade and cause even more problems for the passengers, porter and staff.

Top-billed Silvio Dionisio is Juliet; a jaded, high-priced prostitute who seems a little bitter dealing with her perverted customers. One of those customers is a married perv named Jeff who lusts after his boy-crazed 16-year-old daughter Evelyn (Fiammetta Flamini) and wants Juliet to wear his daughter's nightgown while he has sex with her. Yikes. Venantino Venantini is Mike, a frustrated man trying to reconcile his marriage to bitchy wife Anna (Zora Kerova). Anna sneaks off for a tryst with one of the punks that turns into a rape sandwich when another of the goons walks in on them and decides to join in. Gianluigi Chirizzi is Peter, a prisoner being escorted by a policeman who may or may not be innocent. Other characters include a wealthy, middle-aged businessman who makes his assistant Willis buy him porn magazines at a concession stand and a terminally ill elderly woman name Mary (Rita Livesi), who's headed to Switzerland with her husband Harold to have some kind of operation.

After Anna gets raped, the goons manage to knock out a few of the guys, tie them up and get their hands on a gun. Now they have control of the situation. Since David has the hots for Juliet, but she won't give him the time of day, he threatens to rape the 16-year-old "virgin" if she doesn't comply with his wishes. She ends up getting raped by him and Ernie. The punks also try to force some of the passengers to rape Juliet. Nice guys, huh? Frustrated hubby Mike finally gets fed up with Anna and rapes her. Before too long, the "rape" starts to look a little more consensual as Juliet and Peter pair up and Ernie gets to nail the "virgin." The film has four attractive blonde women in it and they all have nude scenes. The men in this one also aren't shy about showing skin, and the soft porn sex/rape scenes are strong enough to merit this an NC-17.
.
However, if you want violence and gory thrills, you won't get much of that here. It relegates most of the action and murder scenes to the last ten minutes or so, and even that isn't much. I don't even recall a single drop of blood in this one. The story and screenplay are from Luigi Montefiori (George Eastman) and there's a catchy synthesizer score from Marcello Giombini. All in all, if you're in the mood for a little rough, bad taste sexploitation you'll probably enjoy this one.
.
Distributor Camera Obscura (out of Australia) have recently announced they'll be releasing this one on DVD soon. It's yet to receive an official American release.
★★1/2
Posted by The Bloody Pit of Horror at 4:03 AM