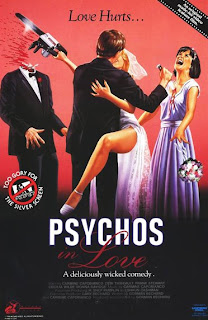 Directed by:
Gorman Bechard
Joe (Carmine Capobianco) is a pudgy, bearded, outgoing bartender who likes to slit the necks of scantily clad women. Kate (Debi Thibeault) is a cheerful manicurist with a Molly Ringwald haircut who enjoys chopping up her obnoxious dates with a chainsaw. Naturally, when these two meet - and can bond over their shared love for blood and equally passionate dislike for grapes (?) - it's love at first sight in this very gory and sometimes hilarious low-budget horror-comedy from Waterbury, Connecticut. Frank Stewart co-stars as Herman, a deranged cannibal plumber, who eats ladyfingers and severed hands, and in one scene, cuts open a woman with a saw and lets the blood squirt directly into his mouth. Loaded with cheap (but mostly pretty good) gore including slashed throats, shootings, stabbings, a bloody sink drain, decapitated heads, severed limbs, blood vomiting, diced up chunks of skin and much more. A lot of people get killed in this film.
.
And if the gore's not enough, this one's also loaded with nudity. Cecilia Wilde (PLEDGE NIGHT) and Ruth Collins (PRIME EVIL) as strippers, Lee Anne Baker (NECROPOLIS) as a slutty rocker chick and Penthouse Pet of the Year Angela Nicholas (aka Angela Davies in soft porn films) are just some of the topless victims. There's also a PSYCHO-inspired shower scene homage, a nod to EATING RAOUL (an obvious influence) and a hilarious theme song. Although some unfunny bits may make you wince and the film clearly runs out of steam toward the end, this is still the kind of energetic, enjoyably crude and over-the-top tasteless regional production I can recommend to fans of this stuff. Next up for the director was the moronic (and sometimes very funny) rape-victims-strike-back vigilante picture CEMETERY HIGH (1987) and the sci-fi exploitation comedy GALACTIC GIGOLO (1988).
★★1/2
Posted by The Bloody Pit of Horror at 11:44 PM

My motto's always been an ounce of prevention is worth a mannnnnicure.