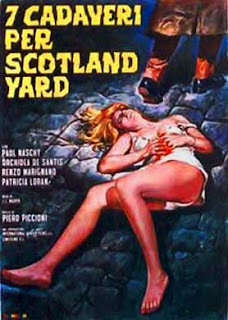 A Jack the Ripper-style killer is doing his thing in modern day London; cutting up tart streetwalkers with medical precision, removing their body parts and tauntingly sending some of those parts to the Scotland Yard detectives trying to crack the case. Top-billed Paul Naschy plays Pedro Dorian (the character name in the dubbed version I watched), a med-school dropout turned acrobat (!) turned booze swilling vagrant whose career in the circus ended after a high-wire fall left him with a bum leg. He understandably becomes chief suspect in the murders because of his medical knowledge, the fact his hooker wife is murdered and the fact he's seen fleeing a second crime scene after he wakes up covered in blood and finds another of his lovers dead in bed right next to him. Some guys just have all the luck, don't they? Not only do they find themselves in the wrong place at the wrong time on more than one occasion but they also have to star in films with scripts that rely on a ridiculous amount of sheer coincidence to keep the ball rolling. And sometimes they even write them!

Pedro (who the police usually refer to as "that Spaniard") isn't the only suspect, though. There are two more. The first is Scotland Yard's Commissioner Henry Campbell (Renzo Marignano) himself, who one little girl claims she saw at a victim's apartment prior to her murder. The second suspect is muy guapo schoolteacher Winston Avery (Andrés Resino), who has lots of money but just as many relationship problems. For starters, he's impotent. Somehow the police also know he's impotent and that's because the Commissioner may be Winston's wife Sandy's (Orchidea de Santis) secret lover! See what I mean about that sheer coincidence thing? Winston also makes uncomfortable passes at Rosemary, one of his female students, and tries to blackmail her into breaking up with her no-good boyfriend. Rosemary turns up dead with her throat cut, but the cops never say anything about Winston being a suspect. Winston's wife is then found dead, which ties him to just as many dead women as Naschy's character, but the cops never say anything about him being a suspect. Instead, they let him go on a vacation!

The film basically centers around the three men I just mentioned above. There are plenty of women on the payroll too, but none of them really have a character unless you count taking off your clothes, saying one bitchy line and then getting killed as being a character. The only one worth mentioning is a hooker named Lulu (Patricia Loran), who believes Pedro is the killer and organizes a posse of punks to attack him with switchblades. That backfires, she realizes Pedro may actually be innocent and then she tries to help him implicate the Commissioner in the murders. For the finale, Pedro, the Commissioner and Winston all end up in the killer's top secret laboratory (where he stores his collection of body parts - hands, hearts, etc. - in jars) for the big reveal, which actually isn't a big reveal at all when you take into consideration one clumsy clue about the origin of the killer's weapon of choice. But hey, you do get to see Naschy leap off a staircase at one of the other suspects while screaming "You dirty keeeeeler!" I guess that's something.

From a technical standpoint, the cinematography, music and locations are all blandsville. The direction isn't particularly stylish either, and the script and acting are both mediocre. Naschy fails to impress and doesn't register much emotion as he hobbles around on London streets dragging his leg behind him, though he does get to have three separate fight scenes. The film does a fair job of getting you to question your choice of who the killer is at a few points and adds a couple of OK twists here and there.

I saw the release from TeleVista under the title 7 MURDERS FOR SCOTLAND YARD (it was also released to video until several different titles). The print doesn't look too bad, it's dubbed (by a very snooty-sounding British cast) and it's "clothed." As was customary at this time for international productions, two different takes were done with most of the female victims for different markets, one with nudity and another with victims merely in their bras and panties. The TeleVista release uses the underwear scenes, so if you want T&A you'll have to find another cut of the film. There's just a pinch of gore, with some bright red blood and knives going into badly mocked-up torsos and backs that look like someone stabbing into pantyhose filled with lard.

Posted by The Bloody Pit of Horror at 6:18 AM

I saw on IMDb that the character names are listed differently, but in the dubbed version I watched those are the names that were used. Orchidea is indeed muy guapa.

This is one I haven't seen. It actually won some international horror award! I read about it in Naschy's autobiography.