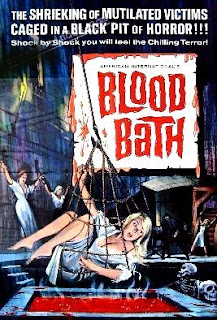 Directed by:
Jack Hill
Stephanie Rothman
Against almost inconceivable odds, this mishmash of scenes from three different directors, filmed between 1962 and 1966, actually manages to take on some kind of surreal, alternative beauty at times. The two versions that were released are BLOOD BATH (which runs just 69 minutes and doesn't have any of the vampire scenes) and TRACK (which includes all of the footage added for TV showings and pushes the running time up to 80 minutes). Not everyone's going to want to watch it, but it's pretty fascinating and will be of particular interest to film buffs for its unusual production history. To make a long story short, (uncredited) executive producer Roger Corman had a scuffle with original director Jack Hill and fired him, then hired Stephanie Rothman to shoot some new footage to combine with Hill's effort and scenes from the shot-in-Yugoslavia Corman production PORTRAIT IN TERROR (which was originally called OPERATION TITIAN and starred Patrick Magee). William Campbell happened to be in both PORTRAIT and Hill's footage, so his presence is the common link that holds everything together. Well, sort of. It gets pretty confusing at times.
TRACK opens with an atmospheric sequence of huge shadows moving against buildings as a vampire stalks his prey. Shades of BUCKET OF BLOOD soon follow as the hilariously pretentious Max (Karl Schanzer) showcases his "quantum" paint gun artwork in a beatnik café. Max is jealous because he's being outsold on the local scene by Antonio Sordi's series of "Dead Red Nudes;" morbid paintings of nude women being murdered. Max and his girl Daisy (Marissa Mathes) end up getting into it when she pesters him to paint her and he agrees ("I shall entitle it... Portrait of an Idiot!") Daisy storms off, visits her blonde ballerina friend Dorian ("Linda"/Lori Saunders) and then ends up running across mysterious artist Sordi (Campbell). The two get to talking, she decides he's not so bad and ends up going back to his home to model for him. He paints her, kills her (with a meat cleaver) and then dips her body in molten wax. Dorian and Max, along with a few of Max's artist pals (Sid Haig and Jonathan Haze) and Daisy's sister Donna (Sandra Knight) search for her.

In the meantime, there's all kinds of crazy, enjoyable stuff going on. There's a very long sequence of a woman being chased around by a top hat/trench coat wearing Sordi (in this attire probably to show that it's not Campbell doing these scenes). It goes around a building, down a staircase, down a hill, through some woods, to the beach and finally ends up in the ocean! Sordi's multiple flashbacks/delusions involve a cursed ancestor and reuse some of the scenic footage from Portrait. It seems to be dubbed over and Patrick Magee is included as a jilted husband who's killed by (you guessed it!) hot wax. There's also mention of that ancestor being burned alive at the stake for his crimes. Sordi is visited by the ghost of Melizza, a former flame who shows up cackling in a haunted painting! She's also played by Lori Saunders (in a black wig). Speaking of Saunders, much time is spent with her frolicking on the beach in a bikini and there's a totally weird dance sequence set to classical music that goes on for several minutes, is shot from different angles, distances and through diamond and square panels to give us five similar images. There's also a memorable sequence on a carousel and much more.
★★1/2
Posted by The Bloody Pit of Horror at 12:43 AM